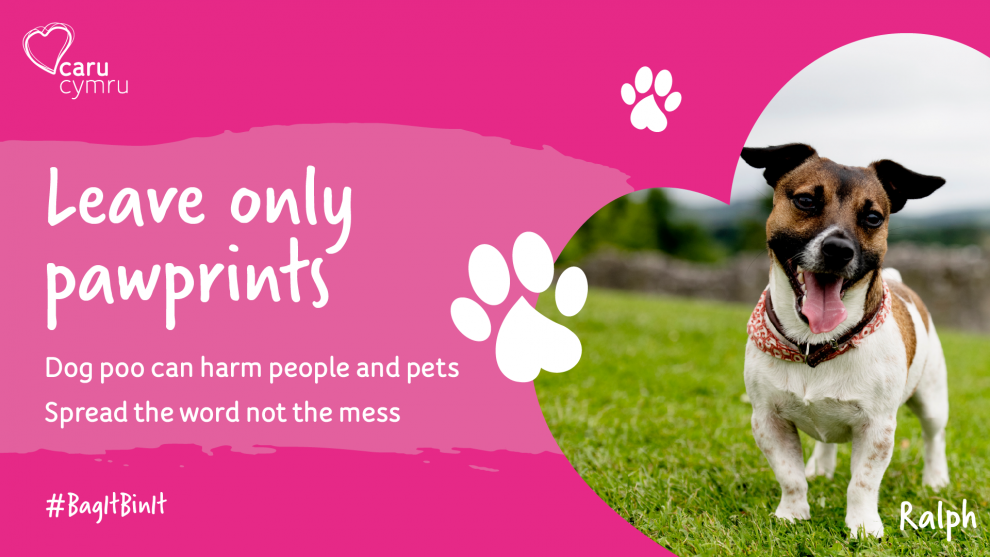 THE WILDLIFE Trust of South and West Wales is urging dog owners to do the right thing and pick up after their pets as part of a new national campaign from Keep Wales Tidy.

Although an estimated nine out of ten dog owners pick up after their pets, dog poo remains a persistent issue in neighbourhoods across the country. Keep Wales Tidy’s campaign aims to raise awareness of the health risks associated with dog poo; not just for humans but also for livestock and other pets.

Dog poo that’s left behind can carry harmful bacteria which can remain in soil long after it has decomposed.

The nationwide campaign is being run as part of Caru Cymru (a Welsh phrase meaning ‘Love Wales’) – an inclusive movement led by Keep Wales Tidy and local authorities to inspire people to take action and care for the environment.

Based on research by behaviour change experts, bright pink signs, posters, pawprint stencils and bin stickers will be appearing across South East Wales to ‘nudge’ people into making the right decision.

Gina Gavigan, Marketing and Development Manager at The Wildlife Trust of South and West Wales said:

“Dog mess is not only an unsightly health hazard for visitors, reserve staff and volunteers, it also promotes the growth of weeds and discourages the growth of wildflowers. It can also spread disease and pathogens.

For example, when reserves staff are out strimming the paths to keep them clear for visitors, dog mess can end up in their eyes which could lead to serious injury or even blindness.

Our reserves are regularly used by families and reserve staff need to ensure people aren’t at risk from coming into contact with dog mess. So next time you’re visiting one of our reserves with your four-legged friend please put your dog waste in the bins provided or take it home with you.”

“We’re excited to be launching this important campaign with our local authority partners. As a nation of dog lovers, we should all be aware that dog poo isn’t just an unpleasant mess, it can be dangerous.

“We’re urging the small minority of irresponsible dog owners to do the right thing. By not picking up after your dog, you could be putting people, livestock, and our beloved pets at risk. Please bag it, bin it and leave only pawprints when you’re out and about.”

People in South East Wales and across Wales are being encouraged to join the new campaign. Visit Keep Wales Tidy’s website to find out more and download free materials: www.keepwalestidy.cymru/caru-cymru

Miriam Elin Sautin from Pen Llŷn is the winner of the Urdd Eisteddfod 2020-21 Drama Medal
£1.7 billion project placing Wales at the forefront of renewable energy innovation