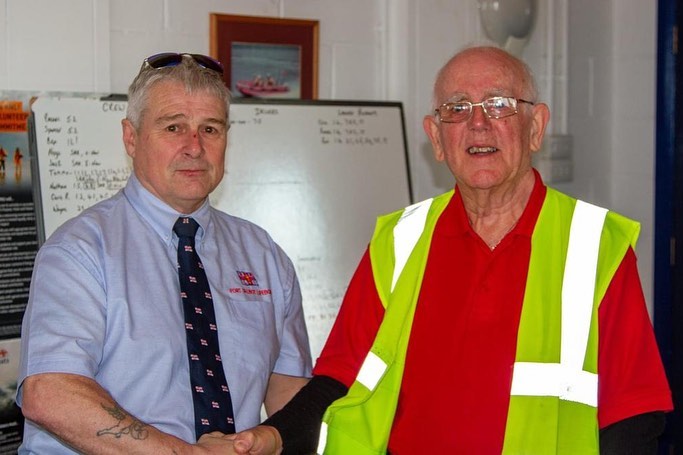 MEL COOPER, has stepped down from his role as Lifeboat Press Officer at the station after 22 years of dedicated service. The Mayor and Mayoress of Neath Port Talbot visited at the weekend to say a special thank you to Mel and present him with a gift.

Mel has held a number of roles at the station including shore crew and fundraising secretary. As Lifeboat Press Officer, Mel has played an integral role in raising awareness of the work of the RNLI in the local community. He built excellent relationships in the local media, helping to boost support for the charity and increase propensity to support.

The station is incredibly grateful for his hard work and a token of gratitude presented him with a tidal clock made of recycled milk bottles. The gift is in honour of his many years of collecting milk bottles at the station to be recycled and for his love of looking after the station clock.

Clive Morris, Port Talbot RNLI Lifeboat Operations Manager, says: ‘It’s been an honour and privilege to have worked with a man who always put the lifeboat at the forefront of everything. He has been a father figure to crew, past and present. If I were to describe Mel in one word it would be as a piece of Port Talbot rock. He is solid, totally reliable and if cut in half, would say Port Talbot RNLI right the way through. We wish Mel a long and happy retirement. He will now be able to spend more time at home with wife Margaret but we’re sure he will keep in touch.”

The RNLI’s media team in Wales have also paid tribute to Mel for his dedication and commitment.

Danielle Rush, Regional Media Manager for Wales, the West and Isle of Man says: “The role of the Lifeboat Press Officer on station is such a vital one, without volunteers like Mel we wouldn’t be able to share the fantastic stories whether it be of daring rescues, or fundraising events and initiatives.

“Over the many years I’ve known Mel, nothing has ever been too much trouble. He has embraced opportunities to raise the profile of Port Talbot RNLI and is the font of all knowledge in his local community. Despite being in his eighties, his energy and commitment to the role has not faltered. He embodies all the RNLI’s values and it is a real pleasure to have worked alongside him. We shall miss Mel very much and are so very grateful to the many years he has volunteered.”