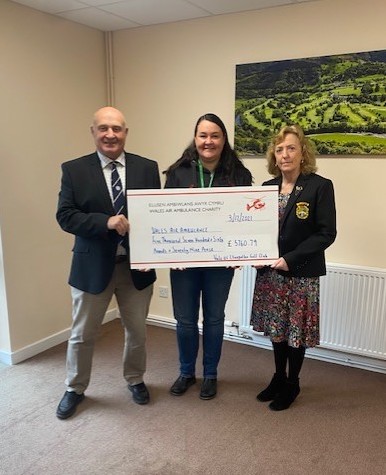 VALE OF LLANGOLLEN GOLF CLUB has presented the Wales Air Ambulance with a cheque of £5,760 after the charity was chosen as its charity of the year.

Initially the lifesaving charity was chosen as its Charity of the Year for 2020, by ladies captain Dr Margaret O’Sullivan and the men’s captain Andrew Brown, but due to the Coronavirus pandemic it was decided that their roles would continue for another year and the Wales Air Ambulance was extended as the charity of the year for another 12 months.

Reflecting on why the Wales Air Ambulance was chosen, Dr Margaret O’Sullivan, who worked at Wrexham Maelor Hospital as a consultant rheumatologist for 23 years, said: “We decided to have Wales Air Ambulance as our chosen charity as we both appreciated the excellent work the air ambulance does and we specifically wished to support a Wales charity where the funds are used for the local population.”

Due to the restrictions of the pandemic the Vale of Llangollen Golf Club were unable to hold an auction and the golfers were unable to gather in the clubhouse.

Reflecting on the fantastic amount raised, Dr O’Sullivan added: “Under the circumstances our opportunity to increase the amount raised was curtailed because of Covid restrictions and therefore we were very pleased with the amount.”

Debra Sima, Wales Air Ambulance’s community fundraiser, who was presented with the cheque by the two captains, said: “A huge thank you to Margaret and Andrew for choosing the Wales Air Ambulance as its Charity of the Year. Despite the challenges they faced with the pandemic the Vale of Llangollen Golf Club raised an incredible £5,760 for our lifesaving charity. Thank you to everyone who has supported their fundraiser, every donation will help us to continue to be there for the people of Wales 24/7.” 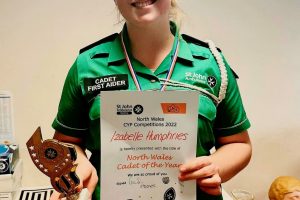