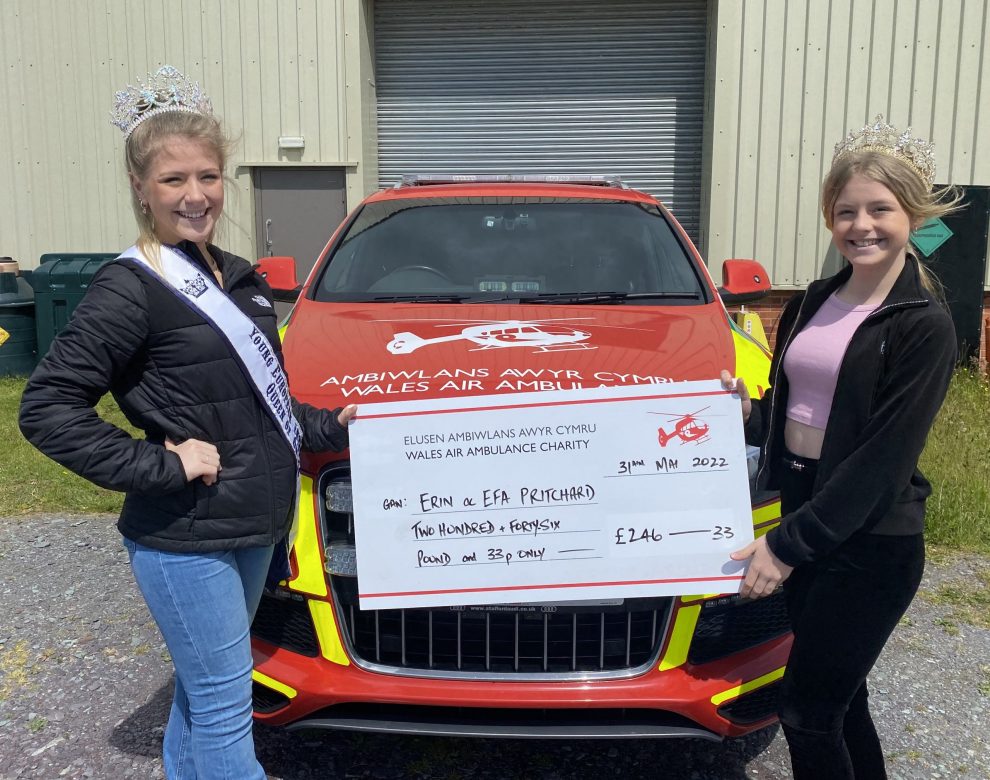 TWO Llanrug siblings have raised £246 for the Wales Air Ambulance after the Charity’s medics saved their cousin Cara Owen’s life.

During a martial arts fight night Erin and Efa Pritchard went around the audience with a collection bucket for four hours talking to people and asking them to donate to the lifesaving 24/7 service.

In September 2019 Caernarfon kickboxer, Cara, suffered an acute subdural hematoma (a life-threatening blot clot on the brain) after winning an amateur kickboxing match. She survived following emergency care from the Charity’s medics Tracy Phipps and Ian Thomas, and later went on to have a metal plate inserted into her head.

Erin, 15 and Efa, 13 are no stranger to fundraising for different charities, the sisters have been participating in various pageant events across the U.K for seven years and part of their work involves fundraising.

During the original lockdown in 2020 the girls took part in a virtual Snowdon hike, which was in association with Habit fitness classes, which helped raise around £2,500 for the Wales Air Ambulance.

Proud mum Gemma said: “Their cousin urgently needed the help of the Wales Air Ambulance at the same type of boxing event and the medics saved her life. The girls wanted to show their appreciation to the charity.

“I’m extremely proud of all the charity work they have done which has exceeded £55,000.”

The Wales Air Ambulance Charity emergency service offers advanced critical care and is often described as a ‘Flying ED’. The on-board consultants and critical care practitioners are highly skilled and carry some of the most pioneering medical equipment in the world. They can deliver blood transfusions, administer anaesthesia, and undertake emergency operations at the scene of the incident, before flying the patient directly to specialist care.

Alwyn Jones said: “It was lovely to meet Erin and Efa during their cheque presentation. Thank you for your dedication in raising funds for the Wales Air Ambulance. Despite their young age the girls are aware of the essential service the Wales Air Ambulance provides for the people of Wales, after Cara needed lifesaving intervention from our medics.

“Bucket collections like this one will help us raise the £8 million every year to keep our emergency helicopters in the air and our rapid response vehicles on the road. Thank you, Erin and Efa for supporting out Charity. It is much appreciated.”