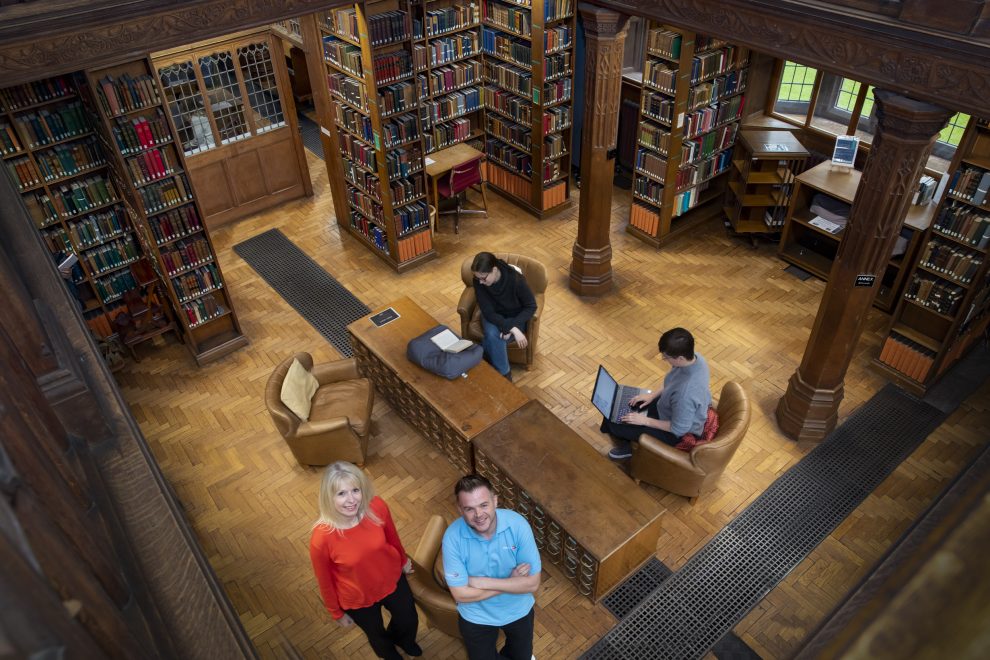 A North Wales IT firm is working on the gargantuan task of preserving the priceless collection of the historic library commemorating a political giant of the Victorian era for future generations in cyberspace.

Gladstone’s Library in Hawarden, the UK’s only prime ministerial library, was set up in the 1880s with a bequest from the Grand Old Man of Victorian politics, four-time Liberal prime minister William Gladstone.

Now 140 years later, thousands of books and documents housed in the Grade One-listed building, including Gladstone’s own collection, are being stored on the Cloud with the help of Rawson IT, part of Wrexham-based business communications and equipment company Rawson Digital.

The Library’s treasures include Latin manuscripts and 600-year-old works from the beginning of printing in Europe and Gladstone’s books with his hand-written notes in the margins.

Wrexham-based Rawson had already revolutionised the Library’s IT and phone systems and helped them make massive savings, cutting their £1,000 a month phone bill by more than half.

What’s more, Microsoft issued free licences for charities like the Library for the use of the Cloud and they’ve been able to empty the room full of expensive servers which once stored their data and which had to be kept cool.

Craig Davies, Managing Director of Rawson IT Services, said: “We provide the internet connectivity for the Library to digitise their records. We’re supplying the hardware and the support for them.

“We started working with them just before the first lockdown, and we were able to put them in the Cloud and enable them to work from home and saved them a small fortune.

“Originally, they had a room full of servers, but we’ve taken them all out and put them on the Cloud, and now they’re undertaking a major digitisation project of key parts of the Library collections.

“Their phone systems were costing them hundreds of pounds a month, and we were able to reduce that hugely by accessing the special charity subscriptions which Microsoft offer and installing a Cloud-based phone system.

“Gladstone’s Library is such a fantastic institution, and for someone like me who lives just up the road, it’s great to be able to work with them and help them out.

“I know that they used the money they saved to buy new laptops and PCs to help their staff work more easily from home and that has also been facilitated by the system we’ve put in.”

The Library attracts almost 30,000 users a year from all over the world, many of them staying in its residential accommodation and working in the library, using its vast collection of resources.

Louisa Yates, the Director of Collections and Research, said: “It’s not just the collections that are available to people all over the world online but the events like Gladfest, which they can now watch either live or recorded.

“This is a big, old building with a basement and three floors, and we all expect to turn our computers on and for everything to work. Our visitors expect that too, and now thanks to Rawson there is free Wi-Fi across the building.

“We have people coming here from all over the world and writing dissertations, so we must have a good and reliable system.

“We just ran Gladfest online and used to have to audio record everything but now it’s all there on the Cloud and is available worldwide.”

Finance Manager Sarah Robertson added: “What Rawsons have done is make us future-proof, and that’s key for us.

“Three years ago, we depended on a room full of servers – we actually lost one because it overheated, but now it is saved on the Cloud, and we’ve even got that extra room back.

“Rawsons know what we do and can come up with solutions before they arrive. They have been exceptional and I can’t imagine us using anyone else.”

Gladstone’s Library, the UK’s only Prime Ministerial library, is used by researchers from around the world and includes the Reading Rooms and silent study spaces where everything from academic works to bestselling novels have been produced.

It also provides accommodation, a bistro restaurant, conference and meeting rooms and stages events and courses. For more information, go to https://www.gladstoneslibrary.org/

Rawson IT Systems is part of the Rawson Group founded by Vaughn Rawson to supply photocopying and printing machines for businesses. Its services include IT and the provision of solar PV and electric vehicle charging.

For more information on the Rawson Group, go to https://rawsongroup.co.uk/