How Wales has explored the universe 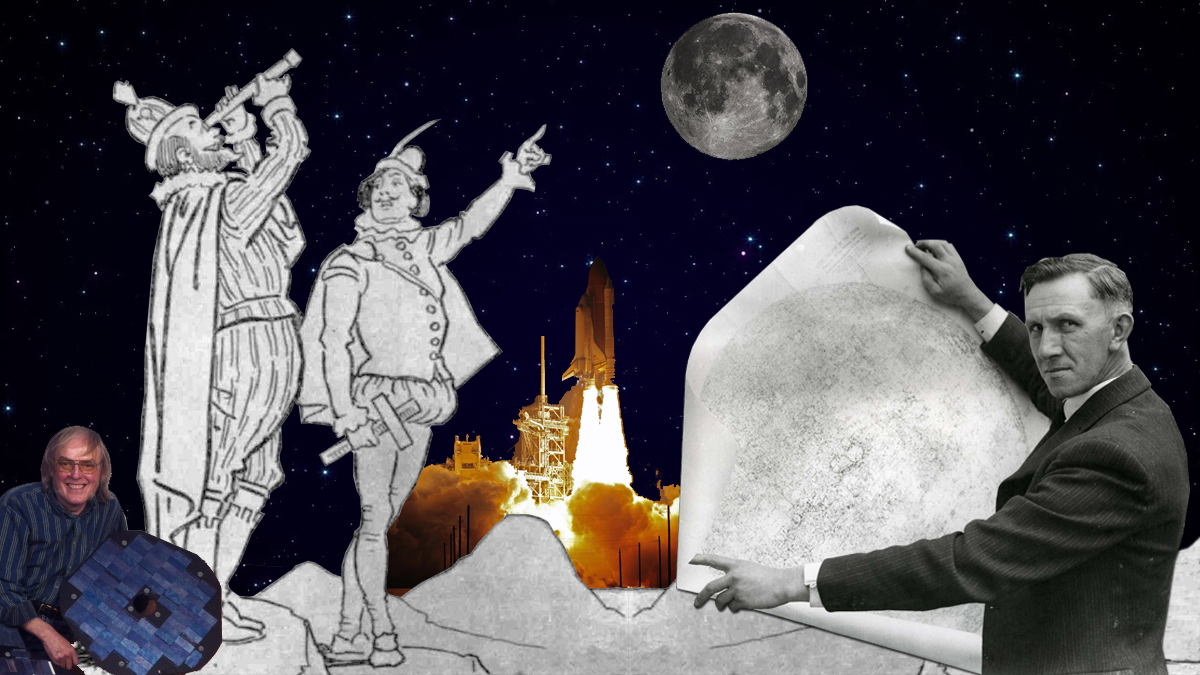 BELIEVE it or not, the history of space discoveries in Wales goes way, way back to 1607, and a man called Sir William Lower.

Born and bred in Cornwall, Lower moved to Trefenty in Carmarthenshire after marrying Penelope Perrot.

In 1607, he observed Halley’s Comet with his naked eye and used a cross-staff to measure its position in relation to the stars. He shared his findings with other astronomers of the period, including Thomas Harriot, with whom he became a close friend.

Lower’s observations were greatly improved by the invention of the telescope in the Netherlands in 1608.

Within a year, British astronomers such as Harriot were making telescopes for themselves and sending them to other observers such as Lower.

Using his telescope, Lower became interested in studying the Moon. In 1610 he observed its irregular surface, likening it to a tart that his cook had made – ‘full of bright and dark stuff’.

This discovery was not published by Lower and the famous Italian astronomer Galileo Galilei was credited with the finding, leaving the Welsh links out of most history books.

Jumping ahead to 1851, John Dillwyn Llewellyn, who was born in Swansea in 1810, built an built an observatory in the grounds of his estate in Penllergare. The observatory was a birthday present for his daughter, Thereza, who shared his interest in the night sky.

Thereza assisted her father in his experiments and in 1857 they produced one of the earliest photographs of the Moon. Their efforts led to the site becoming a popular place for stargazing among local astronomers. The observatory housed a 4¾-inch aperture refracting telescope on an equatorial mount.

A restoration project is currently taking place at Penllergaer today by the Penllergare Trust. Guided by the unique archive of John Dillwyn Llewelyn’s mid-nineteenth century photography, the upper lake will be de-silted, and steps, terraces, waterfalls and cascades will be repaired and restored to reinstate the picturesque and romantic design.

The stone arched Llewelyn Bridge has now been completed; perhaps the only bridge of its type to be built in Britain in decades. The descendants of John Dillwyn Llewelyn are selling the estate piecemeal for housing developments.

Around the same time that Llewellyn was photographing the moon, Arthur Mee was moving to Llanelli from Scotland, before settling in Cardiff in 1892 as a journalist for the Western Mail.

Having had an interest in astronomy from childhood, Mee purchased a telescope at the age of seventeen and made detailed drawings of the Moon and Mars.

Furthermore, he established the The Astronomical Society of Wales in 1895. The Society organised regular lectures on astronomical subjects and published a journal under the editorship of Mee.

At its peak, membership of the society numbered 200, although it disbanded with the outbreak of the First World War in 1918. Many societies throughout Wales exist in the current times, however there is no centralised society for the entirety of Wales.

A Welshman also assisted NASA with the historic moon landing in the 1960s.

Hugh Percy Wilkins, born in Carmarthen in 1896, also had a lifelong love of astronomy and produced astronomical drawings as a teen.

After the First World War, he moved to Llanelli where he began to study the Moon’s surface in greater detail.

He completed his first Moon map in 1924 and subsequently published a number of larger and more detailed maps over the next ten years.

In 1938, Wilkins began work on a much larger map. This map was finished in 1946 and is his most famous work. It was over 7.6 metres in diameter and revealed hidden regions of the Moon and previously unknown features.

The map was subsequently used by NASA to decide where to land during the Apollo missions of the 1960s. Unfortunately, Wilkins did not live to see this, but a crater on the Moon is named in honour of his contribution to lunar observation, so a bit of Welsh history sits out in space forever.

A Welshman was also responsible for the rockets that NASA used to get to space in the first place – William Grove.

William Grove was born in Swansea in 1811. A lawyer by profession, Grove was also a keen amateur scientist. He was closely involved with the formation of the Royal Institution of South Wales in 1835.

In 1842 he invented the hydrogen fuel cell, which produced electricity. This was achieved by placing electrodes in sulphuric acid and separately in hydrogen and oxygen to produce an electrical current.

By linking several cells together a higher voltage could be achieved. A hundred years later, Grove’s invention provided the basis for the fuel cells used by NASA for the Gemini Earth orbit missions and the Apollo Moon landings. More recently, this technology has been used to power the Space Shuttle and satellites.

In 2015, Swansea City Council unveiled a Blue Plaque close to his former home in Grove Place to honour his achievements. A crater on the Moon is also named in his memory.

That’s not all, however, as Welsh scientists were also responsible for helping build the Beagle 2, which was a British Space probe that was launched in 2003. Its purpose was to search for signs of life on Mars, past or present.

Scientists from Aberystwyth University were responsible for developing Beagle’s robotic arm. This arm was designed to collect samples of soil from the planet. It would then return them to the robot’s on-board laboratory to search for signs of life.

The University also developed a computer simulation of the surface of Mars to help its movement.

The robot was due to land on Mars on Christmas Day 2003, though no message was received to confirm that it had landed safely and it was assumed lost.

In 2015, however, detailed images developed by scientists at Aberystwyth University showed that Beagle had successfully landed on Mars but had failed to deploy properly.

Wales also is playing a role in preventing a destruction-level event from occuring by monitoring meteoroids, asteroids and comets.

Based in Knighton, Powys, Spaceguard UK is the only organisation in the UK dedicated to addressing the hazard of Near Earth Objects (NEOs).

Acceptance of the threat posed by NEOs has risen in recent years following the explosion of a meteorite over Chelyabinsk, Russia, in 2013.

The work of organisations such as Spaceguard UK is crucial for assessing potential risks and for conducting research into how threatening impacts could be avoided.

Although not quite as important as saving the Earth, the International Space School Education Trust (ISSET) was founded in 1998 by Chris Barber in the Vale of Glamorgan.

ISSET uses Space exploration to inspire young people to choose careers and education in science, technology, engineering and mathematics. ISSET’s flagship competition, ‘Mission Discovery’ gives students the chance to work alongside NASA astronauts, designing an experiment that could be carried out in Space.

The winning experiment is launched to the International Space Station. There, the astronauts carry out the experiment and feed the results back to Mission Control in Houston.

In 2014, the first winning experiments began their journey into Space, with two groups of students from Wales being chosen to have their experiments tested on the mission.

One experiment looked at the effect of weightlessness and another on the development of Alzheimer’s disease. By 2017 ISSET will have launched more experiments into space than any other UK organisation with a majority of them stemming from Welsh pupils.

So, with such a successful history with space, where is next for Wales?

In July 2015, the Welsh Space Strategy was launched. This document outlines the role that Wales hopes to play in future Space exploration and the contribution it will make to the growth of the UK Space sector.

The areas identified for growth in Wales include unmanned aerial systems, rocket propulsion, satellite manufacturing and Earth observation. Developing these areas will improve the technology we rely upon for telecommunications, weather reporting, environmental analysis and national security.

A large number of companies and universities, as well as Aerospace Wales Forum and the Welsh Government have committed themselves to working together to ensure that Wales promotes its potential internationally and continues to attract new investment.

By 2030, it is hoped that Wales will generate 5% of the UK Space industry’s turnover – a £2bn opportunity per annum.

Scientists from Glyndwr University in Wrexham are currently working to develop the mirrors for the European Extremely Large Telescope.

The Telescope, due to be completed in 2024, will be situated in Chile. It will gather fifteen times more light than the largest telescopes around today, allowing it to see further into the universe.

Mirrors are an essential part of a telescope. Their quality determines the sharpness and clarity of the images they are able to produce. The size of the mirror required for this telescope – around half the size of a football pitch – means that it is not possible to build in one-piece.

As a result, scientists are using many smaller mirrors pieced together as a jigsaw.

Each edge of these mirrors needs to be polished very finely to ensure that they fit together securely and that no light is lost.

The team at Glyndwr University recently received world-wide acclaim when they polished the edge of a prototype mirror down to 7.5 nanometres – less than one millionth of a millimetre.

Wales is also home to a number of important testing facilities, including the world’s second longest test track in Pendine.

Operated by QinetiQ, a defence technology company, this test track allows objects to be accelerated to high speeds before hitting a target. Recently, UK engineers have been testing a projectile technology they believe could be used to explore the Solar System.

A steel penetrator developed by Airbus Defence and Space was fired at a 10-tonne cube of ice to simulate the surface of Jupiter’s Moon Europa.

The penetrator travelled at nearly the speed of sound and remained completely intact following impact. When the penetrator is fired into Europa, it will drill into its crust and take samples for analysis in an on-board laboratory.

These results will then be communicated back to Earth. Further testing is taking place and it is hoped that the penetrator will be launched in the next few years.

So, the next time you look up at the night sky, think of those craters on the Moon named after Welshmen, and the technology which was built from Welsh creativity that helped launch countless space expeditions.

The truth is out there!

Boris Johnson apologises over latest No.10 party revelations saying it was ‘work event’