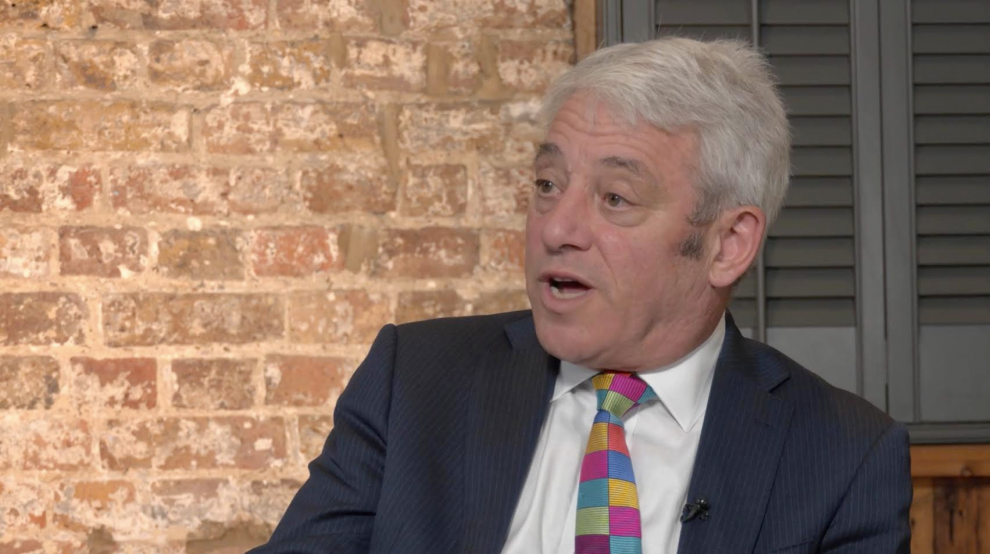 OHN Bercow has denied he sided with remainers in the run up to the EU referendum and insisted he never had any intention to try and stop Brexit.

The former House of Commons speaker, who was widely accused of favouring pro-European MPs, said Boris Johnson fairly won a mandate to proceed with Brexit.

Speaking to Esther McVey and Philip Davies in an interview to be screened on Saturday (October 22), Mr Bercow reflected on his handling of debates on Brexit saying: “I was on the side of Parliament. I always saw anybody who wanted to come to see me. In fact, when the Brexiteers were in a minority, before the word ‘Brexit’ had even been invented, I was awarding urgent questions to Eurosceptics, because I felt that

the minority view needed to be heard.

“My attitude was if Brexit went ahead, which in the end it did, it was fine as that’s the decision of Parliament. And of course, in the end Boris Johnson perfectly legitimately decided to try to get the support of the house for an election when he won the support of the house for an election. And he said at that election, he’d get Brexit done. I personally think it’s been very bad for the country. But do I accept that as a result of winning that mandate he was absolutely entitled then to proceed with Brexit. Absolutely.”

On accusations he was biased against Brexit, he said: “What I can do is look you in the eye and look your viewers in the eye and say, ‘I did not say or imply to any parliamentary colleague on any occasion, anywhere that I wanted to help them stop Brexit’. I didn’t regard that as my job.”

that I was lower class.”

On the influence wife Sally has had on his politics he added: “I think partners do influence each other. And I think if you’re spending a huge amount of time with someone that you care about, and you talk about those matters, it is bound to have an impact.  I don’t accept the somewhat sexist view that there was

this manipulative woman in the background trying to choreograph events and in some sinister fashion, trying to contrive the destruction of the Conservative Party, or you know, the evisceration of all Conservative beliefs. I didn’t accept that. But yes, she did have an impact on me.”

On accusations he bullied staff he said “I certainly don’t think there was cause for people to think there was bullying. As far as the handling of colleagues is concerned, I think most of the time, it was fine. People were pretty good natured. But I would, on reflection, say that I sometimes mishandled individual situations. On one occasion, for example, I was rude to Greg Hands quite late at night. He heckled something and I was irritated and I rounded on it and was rude to him and I shouldn’t have been and I apologised to him in the

Chamber the following day. And I think there were other occasions when I was unduly irascible and waspish.

“But I think I could point to a very large number that I handled with humour. I think a lot of people would say that members of parliament ought to be, frankly, a bit robust, and quite a lot of colleagues are very good at dishing it out, but they don’t like taking it.

“I don’t think there was bullying there at all. As far as staff is concerned, all I would say is I got on incredibly well with the vast majority of people with whom I worked.

“Look, I’m the father of three kids. I want my children to go into the workplace and not to be sworn at, not to be shouted at, not to be threatened, not to be intimidated, not to be bullied by being denied adequate work, and then being told they are surplus to requirements. In other words, not being frozen out and not being given so much work that they can’t possibly cope, which again, can be a form of bullying. I don’t want any of my three kids to experience that.

“But I do think we’re in some danger of getting to a point at which anybody who says I was offended by that, or I feel very upset by what was said, or that I didn’t approve of being told I had to do X or Y or Z, that they all of a sudden, can shout ‘bully’ or ‘bullying’. That’s not right. This can’t be accepted.

He added: “I’m flawed. I made mistakes. I didn’t bully people.”

On the current investigation by the Privileges Committee into Boris Johnson, Mr Bercow said: “I do have a concern about the procedure of it to be honest, because I’m in favour of fairness. I hold no brief for Boris Johnson, who I thought was an absolutely appalling Prime Minister. But I think that the question of due process and fairness is incredibly important. If what he said in the house was untrue, that’s one thing. If it can be shown that he deliberately told an untruth, that is another thing and a very serious thing. But that is quite a challenge for that to be proved. Should he be the subject of cross examination? I do  think he should have the right to cross examine, should he be able to deploy legal representation? In my opinion? Yes.

“As far as former Prime Minister Johnson is concerned, I hold no brief for him and I have every respect for  the Privileges Committee, but I think the question of the procedural propriety of that process is absolutely critical. It should be front and centre stage. And I would say that, whether it was Boris Johnson being investigated or anybody else, very often what you get in these processes is tribalism. So you get people on the right attacking people they regard as opponents, and people on the left attacking people.”

Addressing his regret over sidling up to racists in the Tory party years ago, he said: “I was a member of the immigration repatriation and race relations industry subcommittee of the Monday club. And, as I’ve said on a number of occasions, that is the most shameful feature of my political record. I’m very embarrassed about that. I’m very apologetic for it. I feel contrite. I didn’t think of myself as a racist, but I was sidling up to people who certainly were racist. And I feel very guilty about that. I’m afraid I must take responsibility for it. I never wore a hang Nelson Mandela t-shirt, but several members of the Federation of Conservative Students (FCS) did. I was Chairman at the time that the FCS was formally closed down, but the record will show that Norman Tebbit closed down the Federation in spite and not because of me, and he appointed me to run the successor body. So that’s the full, unvarnished truth. I have a chequered history, I made bad judgments and mistakes.”

Recalling how he was once a victim of anti-semitism he said: “There was a Conservative MP who is no longer in the House who said to me at a very early stage, ‘if I had my way people like you wouldn’t be in this place’. And I said, when you say ‘people like me, do you mean because I’m lower class or because I’m Jewish?’ To which without a moment’s hesitation, he replied, “both”.

“But I think both parties have made big progress. I think that when you’re a representative of a minority, which I was in from the Jewish community, the truth of the matter is that if you’re a conformist in the Conservative Party, you’re fine. The Conservative Party has always embraced minorities who conform, but if you’re inclined to pipe up for yourself, sometimes with discordant tunes that’s when the hostility starts. And I did get quite regular representations from people with profoundly bigoted views, which I proceeded to ignore.”

“Do I like the sound of my own whistle too much? Yes. Did I speak too much? Yes. Should I have been more succinct? Yes. That criticism is a fair criticism. I think I sometimes play to the gallery. I think I was sometimes guilty of being, if you like, almost entrapped in or consumed by the moment and probably reveling in the theatre of it.

“The thing I’m most proud of is empowering backbenchers, granting more urgent questions, granting emergency debates, granting more opportunities, per se, for MPs to question the Prime Minister and other ministers.

“What was my biggest mistake? Well, I don’t know how long we’ve got? I made several. But I think one big mistake I made, which probably isn’t known to members of the public on any scale. But you know about for that was I mishandled the recruitment of the clerk in 2014, I felt I had a very good argument for splitting the roles of Clerk and Chief Executive, which eventually did happen, because on the law of averages, is it likely that the principal constitutional adviser to the Speaker of the House, namely the Clerk of the House, would also top the class at Harvard Business School is not very likely. And I took the view, well, let’s have someone in charge of procedure, but that person shouldn’t also be the chief executive if that person’s got very little experience of the commercial sector, and of how to manage things. And I tried to create a split, but I did it on the back of too little consultation. I did it in a rather hurried fashion, and it caused ill feeling in the house and I then had to backtrack. So that was one quite significant mistake.”