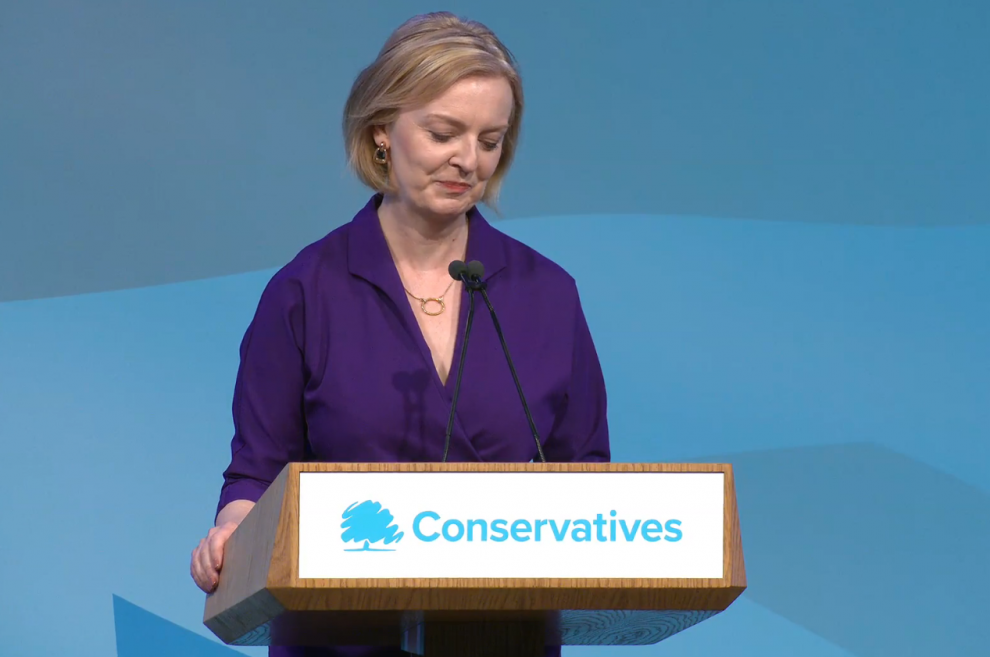 LIZ TRUSS was confirmed as the new leader of the Conservative Party on Monday, September 5.

The widely-tipped victory saw Ms Truss capture 80,000 out of 140,000 votes from Conservative members.

Her margin of victory, 57% to 43%, is comfortable but nowhere near the levels suggested earlier in the campaign.

In her first speech, she claimed she would fulfil the pledges made in the Party’s 2019 election manifesto and praised her predecessor, the disgraced Boris Johnson, for getting Brexit done.

“Leave cannot name one country we would get a better trade deal with if we left the EU.”

At least Liz Truss’s six-year-old prediction about the benefits of Brexit came true.

It also highlights her remarkable capacity to rewrite her past and her fellow Conservatives’ collective amnesia about her.

Her father is an emeritus professor of pure mathematics at the University of Leeds, while her mother was a nurse, teacher, and member of the Campaign for Nuclear Disarmament.

Liz Truss describes her parents as “to the left of Labour.”

She attended the highly-rated Roundhay School in one of Leeds’s more pleasant suburbs. She went to Oxford University to study Politics, Philosophy, and Economics.

During her time at University, she became President of its Liberal Democrat Society and, in 1994, spoke in favour of the monarchy’s abolition at the Party’s national conference and supported the legalisation of cannabis.

After graduating in 1996, she joined the Conservative Party and promoted the value of mathematics teaching to all students in full-time education.

After entering Parliament in 2010, in 2012, she became a junior minister in David Cameron’s government.

After making an impact in her role in the Department of Education, she got a big promotion to the position of Environment Secretary. In that role, she accepted climate change was happening and promoted the end of pesticides that harmed bee populations.

She reversed her positions within a year, backing the lifting of a ban on such pesticides and ending subsidies supporting the extension of solar energy.

During the Referendum campaign of 2016, she was an ardent Remainer, saying: “I am backing remain as I believe it is in Britain’s economic interest and means we can focus on vital economic and social reform at home.”

She also said: “After the 2016 Referendum, she underwent a dramatic conversion to become an ardent Brexiteer – again blown by the prevailing wind in a direction that would further her career ambitions.”

As a disastrous Justice Secretary, she undermined the independence of the judiciary and oversaw a large increase in violence in prisons.

As a reward, she was shunted to the position of Chief Secretary to the Treasury. After backing Boris Johnson in 2019, she became International Trade Secretary. During that time, she signed trade agreements with the UK’s trading partners on strikingly worse terms than the UK had during its EU membership. She also became the UK’s chief negotiator with the EU and rapidly ran those negotiations into the sand.

From radical Liberal Democrat to right-wing Conservative; from ardent Remainer to enthusiastic Brexiteer; the only constants in Liz Truss’s political views have been her views on individual liberty and the pursuit of career advancement.

A strong supporter of David Cameron; a stalwart of Theresa May’s cabinet; a fervent early adopter of the Boris Johnson cult; Liz Truss will be the UK’s fourth Prime Minister in six years and the third in a row who has risen to the post without facing a General Election.

Her inbox would be extraordinarily challenging, even for someone widely regarded as almost as intellectually negligible and facile as her predecessor.

Liz Truss doesn’t have time to build a brand or establish her authority.

She must hit the ground running with fresh ideas to tackle the UK’s massive economic challenges, the fallout from a shambolic Brexit deal agreed by her predecessor, the cost-of-living crisis, the energy crisis, spiralling inflation, the possibility of a recession, Russia’s war in Ukraine, and delivering all the promises on tax cuts she made during the leadership campaign.

Most importantly, she must signal a clear break with the sleaze, patronage, and low standards of public life that forced Boris Johnson and compelled almost his entire ministerial team to quit when the stench of scandal became too much for them.

Against that background, survival to 2024 and beyond will be a massive achievement.

Welsh Conservative leader Andrew RT Davies MS said: “I am delighted that Liz has been elected party leader and will be our next Prime Minister, especially having backed her during the contest.

“Throughout her political career and this contest, we have seen someone with the tenacity, ideas, and stoicism required to lead the Conservatives into the next election and the country through a difficult period.

“There is a lot of work to be getting on with, especially in tackling the cost-of-living crisis, and I look forward to seeing Liz’s ideas put into action to alleviate the struggle millions are facing.

“It is now time to unite behind our new leader, and further build on our record of delivering for Wales and the wider United Kingdom.”

Predictably, Labour in Wales are not happy.

Labour’s Shadow Secretary of State for Wales Jo Stevens told this newspaper: “Liz Truss has her fingerprints all over the crime scene of the past 12 years of Tory failure. She reliably parroted Boris Johnson’s lies and voted for the 15 tax rises the Tories have imposed in the last two years. At every turn, she’s shown people she can’t be trusted.

“Households right across Wales needed action from the Tory Government to tackle their cost of living catastrophe months ago. Nearly nine weeks on from the start of her leadership campaign, Truss still has no plan and no ideas to address the crisis people and businesses are dealing with.”

Commenting on the news, Samuel Kurtz MS told The Herald: “Congratulations to Liz Truss for securing this victory. Whilst I supported Rishi Sunak, the Conservative Party has always had a wealth of talented individuals, and Liz is certainly one.

“The Party must now come together behind our new PM.

“We have some real challenges ahead of us – both abroad and at home – which the incoming Prime Minister must get to grips with. I have faith that Liz Truss has the ability to support the public as we navigate the oncoming winter.

“As we move forward, my priority is ensuring that the communities I represent get the assistance and support they need as we enter these challenging months ahead.

“I’ll be working with my colleagues in Westminster to ensure that support reaches every household in West Wales.”

Welsh Liberal Democrat Leader Jane Dodds MS said: “Under Liz Truss we are set to see more of the chaos that we saw under Boris Johnson. From failing to deal with the cost-of-living emergency, to letting small and medium businesses face the winter alone, to failing to deal with the climate crisis, the Conservatives have shown they don’t care, have no plan and have failed our country.

“The Conservatives may have changed leader, but after twelve years in power at Westminster the Conservatives have shown they are out of ideas, out of energy and out of touch.

“First the government needs to urgently scrap October’s energy price rise to avoid a social catastrophe for families and pensioners this winter. Then we need a general election, to get the Conservatives out of power and deliver the real change Wales needs.”