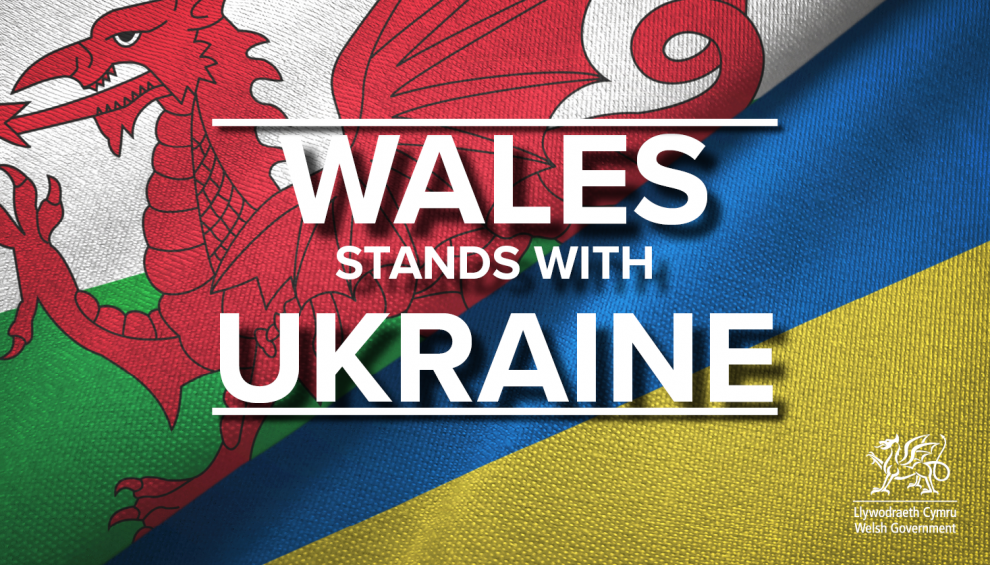 IN THE latest update on the Ukraine crisis, Wales’s Minister for Social Justice Jane Hutt thanked all those households across Wales who have come forward to offer their homes to Ukrainians fleeing the War and encouraged more households to provide this vital support.

The Minister for Social Justice said: “I’m delighted to say that over 5,650 people from Ukraine, sponsored by the Welsh Government and Welsh households, have already arrived in the UK.
“More than 8,200 visas have now been issued to people from Ukraine who have sponsors in Wales, so we expect the number of arrivals to continue to grow in the coming weeks.
“Thousands of Welsh households sponsored Ukrainians to arrive in Wales and committed to hosting them for at least six months.
“As we move into the autumn, we approach the end of that initial period.
“We hope hosts and Ukrainians will agree to extend many of those placements, but we need additional hosts to support those who cannot continue living where they are.
“To ensure a warm welcome to Wales, I’m inviting households across Wales to come forward and open their homes to welcome those seeking sanctuary.
“We’re immensely thankful to all those across Wales acting as hosts to Ukrainians, but more households must come forward.
“I completely understand that there are those who want to help but may not have the resources to do so, given the circumstances we’re all facing with the cost-of-living crisis.”

WALES WILL STEP UP TO THE PLATE

Jane Hutt continued: “What we all know, and has been proven countless times, is that the people of Wales are one of the most generous across the globe, and I’m sure we will step up to the plate once again.
“The idea of hosting can be daunting. That’s why we have funded Housing Justice Cymru to provide a Host Support service which includes expert and reliable information, training, advice, and guidance for people hosting, or those considering hosting, Ukrainians in Wales.
“More information on sessions and training can be found on the Housing Justice Cymru website. We also publish regularly updated guidance for hosts and sponsors at gov. wales/ukraine.
“We still need many more households to consider whether they could provide a home for those in need. This would normally be a commitment to hosting for 6 to 12 months.
“If anyone is considering this, we encourage them to register their interest at gov.wales/offerhome, and to attend one of the ‘Introduction to Hosting’ sessions, facilitated by Housing Justice Cymru. You won’t need to continue the process if you decide it is not for you.
“We have also partnered with Airbnb.org to ensure very short-term emergency placements can be provided to prevent homelessness.
“If you cannot host for more than 6 months but you could offer your property for up to 30 days at a time, you may also be able to contribute. Visit gov.wales/offerhome and follow the link to the Airbnb.org platform.”
Finally, the Minister stated: “We will continue to communicate with those who host Ukrainians, with updated guidance and information to support the valuable role you are undertaking.
“To all those that are already hosting and to those that are considering hosting, thank you, we owe you all a huge debt of gratitude.”

WESTMINSTER MUST BACK HOSTS
DURING COST-OF-LIVING CRISIS

Conservative MS Mark Isherwood raised how the cost-of-living crisis affects Ukrainian refugees.
Where families had taken in those fleeing Russian aggression, he noted a risk of sponsorships not continuing beyond six months because the hosts cannot afford the rise in fuel costs.
He asked the Minister what discussions she’d had with the UK Government about increasing the £350 contribution to households who’d taken in Ukrainian refugees.
The Minister agreed with Mark Isherwood that ending a specific ministerial post dealing with refugees was regrettable.
She noted a lack of information from the UK Government over the summer months and since Liz Truss replaced Boris Johnson as head of the Conservative Government.
Ms Hutt said: “We asked for an increase at least to £500, or up again, doubling to £700 per month. An urgent decision is needed regarding this as they reach the end of their six-month period.
“That period is underway, so we’re writing to all hosts to see if they will continue.”

UK GOVERNMENT URGED
TO PICK UP THE PHONE

The Minister thanked Mark Isherwood for introducing her to a charity offering support in North Wales, Link, and hoped that he and his colleagues would bring pressure to bear on their Westminster colleagues to ensure those in need from Ukraine and those in Wales helping them received support.
She added: “I look forward perhaps that we might have some telephone calls from the Prime Minister and other Ministers to us in Government. We must engage with them and follow this through.
“There is a huge job of work to be done here. We’re taking responsibility in the way I’ve outlined, funding our welcome centres and paying thank-you payments to hosts if they support a family who initially arrived in Wales under the Ukraine family scheme.
“That’s not happening in England. The commitment that we’re making is considerable.
“I hope everyone will join us today, saying that we need to press for those answers in terms of financial support.”

THE THREAT OF HOMELESSNESS

Sioned Williams of Plaid Cymru raised the spectre of Ukrainian refugees becoming homeless in Wales due to a lack of financial support and the end of existing hosting and housing placements.
The Minister praised the work of local authorities across Wales supporting refugees.
She said: “There are very imaginative programmes. That includes a whole range of issues like repurposing empty buildings.
“Local authorities are really coming up with a whole range of ways in which we can support people, perhaps, from a welcome centre, or a host family, into that intermediate accommodation, and then on to other longer-term accommodation.”
Pembrokeshire currently houses around 200 Ukrainian refugees, with the demand for assistance outstripping the availability of suitable accommodation.

NOT ONE PENNY FROM WESTMINSTER
TO SUPPORT FAMILIES FLEEING WAR

Responding to a question from Mabon ap Gwynfor about problems housing family groups, Jane Hutt hit out at the lack of support from the UK Government and how it’s u-turned on a commitment to help families.
“The UK Government has never given a penny towards the family scheme.
“The former Prime Minister, Boris Johnson, in one of his last PMQs, actually said that he thought the Ukraine family scheme should get the same funding and support as the Homes for Ukraine scheme. It’s never happened.
“We have provided thank-you payments to people who are hosting Ukrainian families. It’s all Welsh Government money; it’s not UK Government, because they don’t provide a penny. And also, the British Red Cross—£246,000—who are actually supporting Ukrainian families who are hosting family members under the Ukrainian family scheme.”
On Wednesday, September 28, Eluned Morgan, Wales’s Health Minister, announced the continuation of free healthcare in Wales to Ukrainian residents displaced by the ongoing conflict.
The exemption will continue to apply unless there’s a significant change in circumstances in Ukraine.