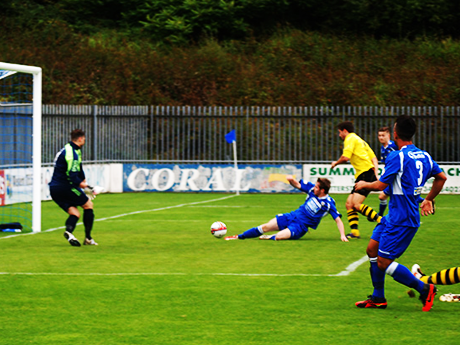 THE Blues were too good for Tata Steel on Saturday as they ran out 5-1 winners.

The home side blitzed their opponents with five first half goals and now sit second in the table.

They started well, dominating possession and it was no surprise when Steffan Williams opened the scoring with just nine minutes gone.

Four minutes later it was two, Williams again the scorer as he pounced on the loose ball.

The away side faced an uphill battle from then on and things got worse in the 23rd minute. Goal scorer turned provider as Williams beat two defenders before crossing to Lewis who put the ball in the net.

For Tata Steel it was now about damage limitation, and they survived for the rest of the half without conceding another goal.

The Blues continued to dominate in the second half but could not add to the score sheet. Sub Joey Leahy came close to adding a sixth when his 20-yard shot brought a brilliant save from the Tata keeper Rogers.

Leahy came close again but Rogers tipped over his shot after Jack Christopher had played him through.

The Blues are now second in the table and are two points behind leaders Goytre. They also have two games in hand on the league leaders. This Saturday they are away to AFC Porth.