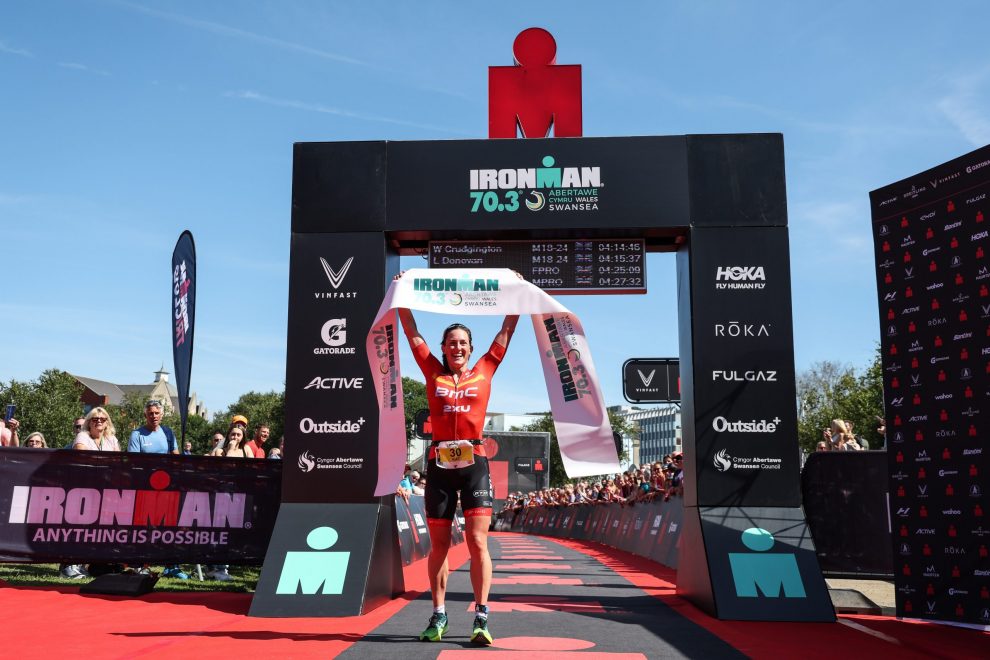 THOUSANDS of athletes and spectators descended on Swansea and Gower for what was truly an incredible day of triathlon in South Wales on Sunday, August 7.

With a stacked field of 35 professional athletes from across the globe, local heroes including Welsh rugby legend Shane Williams, and a sold-out contingent of age group athletes from ages 18 to 73, there was no shortage of excitement across the course which traversed scenic coastline and rolling countryside before culminating in Swansea’s city centre.

A momentous day for Brownlee, the Olympic Champion finished the race over seven minutes ahead of his runner-up, Antonio Benito Lopez (ESP), with an overall time of 03:49:34. Not only is Swansea Brownlee’s first IRONMAN 70.3 win on home soil, but the achievement comes ten years to the day from his gold medal win in Men’s Triathlon at the London 2012 Olympic Games.

With a roaring crowd finish down the red carpet in Museum Gardens, Brownlee credited the incredible spectator support and stunning summer sun as contributors to his race experience.

On the podium, Brownlee said: “I had a couple of occasions where I was going up a hill, looking at the view over the coast to my left or right, which was really beautiful. There were some great crowds in random spots throughout the Gower, with people popping up on farm tracks and all sorts. It was lovely. I think the crowd and the weather are what made it today.”

No stranger to a British bike course, Matthews commented on the versatility of the route, which travelled along the sweeping waterfront of Swansea Bay, through the colourful Mumbles, and across the scenic hills of the Gower.

At the IRONMAN 70.3 Swansea press conference, Matthews said: “You have the first half of the course which has some really punchy rolling hills, while you’re trying not to get distracted by the sea and the beach. Then you have the slight technical aspect, followed by the TT element. I think it just adds the whole package to the race.”

Swansea’s own Shane Williams also toed the start line at the inaugural IRONMAN 70.3 Swansea, finishing the race 16th in his age group with a time of 05:17:46. His first IRONMAN 70.3 event ahead of his upcoming full-distance triathlon at IRONMAN Wales in Tenby on 11 September, Williams credited the spectator support as his key driver to participate in IRONMAN events.

Ahead of the race, Shane told organisers: “I’m most looking forward to the support. It’s the reason I did my first IRONMAN down in Pembrokeshire. The support at IRONMAN Wales is unbelievable, and I’m expecting the same in Swansea. If any of the other IRONMAN events are anything to go by, we’ll have a stack of people showing up to cheer us on.”

A proud 63% of the athlete field raced for Wales, with over 700 athletes from the Swansea area taking to the middle-distance course. Topping the Tri Club podium were local clubs Celtic Tri, Swansea Vale Tri, and the Port Talbot Harriers, who collectively brought 160 of their affiliated athletes to compete in the event.

IRONMAN 70.3 Swansea sold out over 2,000 places in less than four days and brought an estimated economic boost upward of £2.5m to the region. Returning to Swansea until at least 2024, the event will look to continue growing its popularity and visibility over the coming years.

Sam Brawn, Regional Director for UK & Ireland at The IRONMAN Group, said: “Following the success of IRONMAN Wales in Pembrokeshire, it was only a matter of time before we introduced our first 70.3 distance to the region. Not only does South Wales have a flourishing triathlon community, but the support offered both by our host venues and the local communities is unparalleled. We’re excited to watch this race grow, as it will surely become a key fixture on the European calendar of events.”