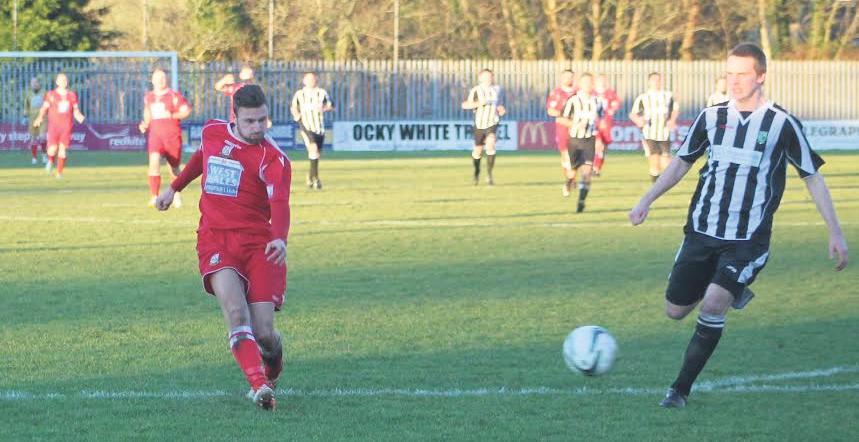 H AV E R F O R D W E S T COUNTY kicked the New Year off with a comfortable 2-0 win over Pontardawe Town. The win was The Bluebirds’ fi rst since October 11 and keeps them fourth, in touch with joint leaders Cardiff Met and Penybont. The home side dominated their second from bottom visitors for much of the game and could have gone ahead in the tenth minute but Steffan Davies saw his shot cleared off the line by Pontardawe’s captain Luke Harris. Moments later, Luke Borelli headed the ball down for Sean Pemberton but he shot wide.

Pontardawe threatened briefly and The Bluebirds were thankful to keeper Craig Morris who pulled off a good save to deny a stinging effort from Alex Wild. Owen Thomas and Nicky Palmer then exchanged passes into the area but Thomas’s effort went wide of the post. Ricky Watts was also a threat down the right hand side for The Bluebirds and he put in a number of dangerous looking crosses, one of which Luke Borelli got on the end of but his header was well saved. It was still 0-0 at half time but it did not take the home side long in the second half to make the breakthrough. Three minutes in to the half Luke Borelli broke and he ran to the edge of the box before shooting low into the bottom left corner of the goal.

Ten minutes later, The Blues were inches away from going 2-0 up as Kieron Howard’s free kick evaded everyone but the Pontardawe keeper Steve Reeve, who did well to turn the ball round the post for a corner. Declan Carroll was brought on soon after and he was immediately involved, narrowly heading over the bar from Antonio Facciuto’s cross. The visitors could not get out of their own half and frustrations got the better of them as a number of players received yellow cards. With twenty minutes to go, The Bluebirds made the points safe with a stunning goal.

Kieron Howard shot from 25 yards out and the ball flew into the top corner giving the keeper no chance. They could have added a third late on when Carroll sent Nicky Palmer through on goal but his first shot was saved and he then sent the rebound over the bar. The Bluebirds saw the game out and will be relieved to get back to winning ways. Their next game at the Bridge Meadow is on January 17 against Ton Pentre. Haverfordwest County: Craig Morris, Ricky Watts, Antonio Facciuto, Sam Rodon, Dale Griffiths, Sean Pemberton, Kieron Howard, Nicky Palmer, Luke Borelli, Steffan Davies, Owen Thomas. Subs: Jordan Follows, Greg Walters, Declan Carroll.