Home » Female Hub season back with a bang 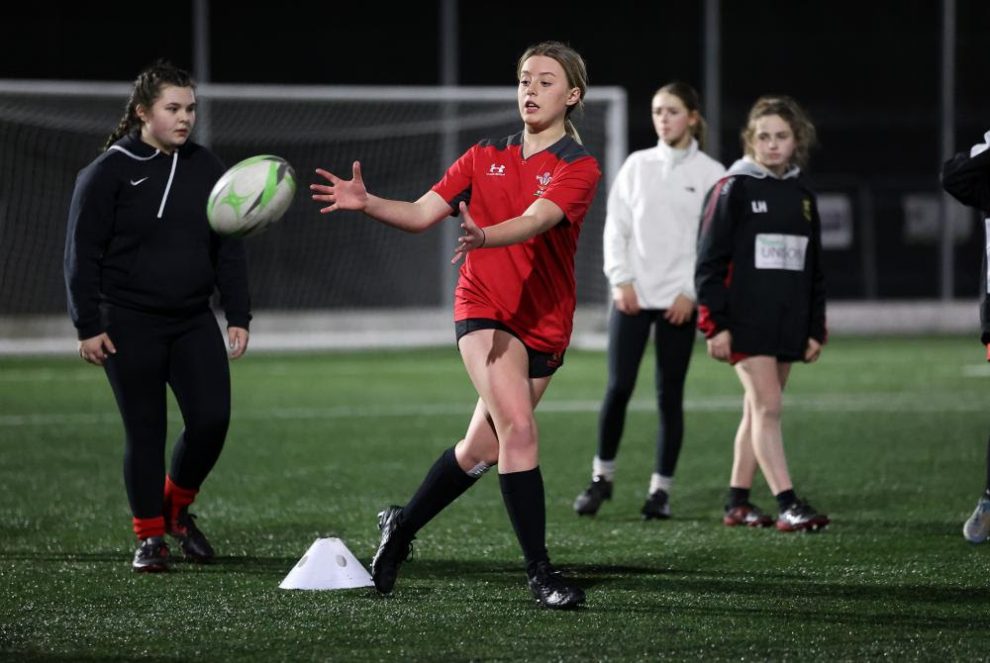 “It’s great to play rugby with your best mates. I love rugby, it’s what I want to do – hobby or professional”

The Female Hub season is back and there are more opportunities for girls to get involved than ever.

There are now 37 Female Hubs all over Wales, with teams from under 7s to u18s and even senior women.

There are additional age groups with under 12s, u14s, u16s and u18s following on from the yearly groups from u7s up to u11s.

More than 5000 women and girls are already actively registered for Female Hubs and clubs for this aligned female season (March – December 2022) – the highest number of registered female players to date. There has been a particular growth in the female game compared to prior to the pandemic – for example the number of U15 and U18 teams that participated in the cup competitions last autumn was almost double the number that were active in season 2019/20.

The Belles, based at Nelson RFC is one of the newest Female Hubs in Wales, along with East Swansea Eagles, based at Morriston RFC, the Stormers based in East Cardiff, and the return of the Steelers in Merthyr.

CLICK HERE to watch the enthusiasm for the game at the Belles, who have also been inspired by the professional Wales Women programme.

Evie Hill, 14 said, “I’ve been playing for five years, firstly in mixed rugby. It was good with the boys but I prefer playing with my friends in a female environment. I want to play for Wales. The contract news and the fact that there is a Wales U18 team motivates me to achieve those aims. Being a full-time athlete is my top aim in life but even if that didn’t happen I will still play rugby, it’s want I want to do whether that’s a hobby or whether I play professionally.”

Mark Picton-Powell, Belles Hub Lead said, “We feel on top of the world to be given Female Hub status. Previously at Nelson we had an U15, U18 and more recently established a senior side but now that we are a Female Hub, we can offer more opportunities for younger girls too. With Wales internationals getting contracts, that is something to aspire to. It’s all about enjoyment. If they can develop into future internationals we are doing something right.
“Pre-covid we were healthy but since the contract news, there is a huge buzz. The girls feel they have something to strive for and the opportunities are there.”

To mark the start of the Female Community season in Wales, all 37 Female Hubs have been invited to take part in a rugby festival at Principality Stadium on Saturday 2 April. This could see up to a thousand girls playing matches in a variety of formats on the hallowed turf of the national stadium before supporting Wales Women take on Scotland in the first home TikTok Women’s Six Nations match of the year.

WRU Female Community Rugby Lead Joe Davies said, “The whole of the female rugby community is buoyed by the news of contracts for our international players. This opportunity allows our Female Hub players to run out at Principality Stadium and also support our national team.”

Picton-Powell added:
“We are looking forward to playing in festivals and especially to joining the other Hubs at Principality Stadium on April 2. They girls will get to play on the Principality Stadium pitch and then have the opportunity to watch the players they aspire to be at Cardiff Arms Park at the end of the festival. We had a number of players involved in the Dragons and Cardiff U18 set-ups and the future is looking bright for women’s rugby in Wales.

Wales international Ffion Lewis added, “I didn’t have opportunities to play when I was a young teenager. Now, there are no barriers for girls. Hopefully we can be role models for these younger players. As long as they are coming away from sessions smiling, that’s all you can ask.”

WRU Community Director Geraint John said, “We are all pleased to return to the game we love after the disruptions of last two years. There are so many benefits to being part of a rugby team and we are thrilled with the enthusiasm we are seeing within the female game in particular. We have increased the opportunities for girls to get involved in the game and we are looking forward to a successful female community season all round”.

Enter your postcode in this Hub FINDER to find your nearest Female Hub and get involved.