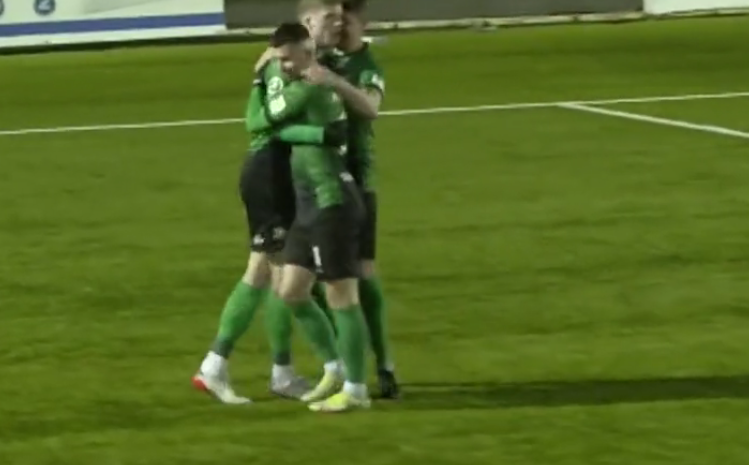 OWAIN Jones’ injury time equaliser at Cefn Druids on Friday night (Mar 4) ensured that Aberystwyth Town emerged from a topsy turvey game with a point which keeps them within striking distance of a Play Off spot at the top of the JD Cymru Play Off Conference.

The impeccable Harry Franklin gave Aber the lead on 11 minutes, only for Phil Mooney (19), Liam Thomas (68) and Niall Flint (81 mins) to turn the game and put the Druids on the verge of their first win of the season.

However the Black and Greens’ subs again made an impact with Ben Wynne smashing home his first Aber goal on 86 minutes, and Jones nodding home on 92 minutes to restore parity.

Antonio Corbisiero’s men started their Phase 2 campaign on fire with a blistering start. Franklin had an early shot saved by Mike Jones in the Druids goal, before playing in Steff Davies who curled an effort just past then post.

Jon Owen was denied and Louis Bradford sent a header past the post before Franklin found space and scored with a low volley from a narrow angle out on the left for a deserved lead.

Aber kept coming and Sam Phillips was next to be denied by Jones, then Steff Davies did well to create space down the right before crossing for Alex Darlington to tap home – but alas the goal was disallowed for offside. Within a minute Ioan Evans’ corner was nodded home by Mooney and the whole balance of the match swung dramatically.

Tyler Garratt volleyed wide for the hosts, Taylor Thain had a shot saved by Alex Pennock, the tricky Liam Thomas saw an effort blocked and cleared and Garratt headed wide from a right wing cross with the improving hosts on top.

Jamie Veale played a nice one two just before the break but missed the target with his effort and the half time scoreline of 1-1 was a fair reflection of a half of two halves.

Aber again started the second half well, determined to retake the lead. Darlington sent a low volley inches wide after a nice move, Franklin’s hard work earned a chance for Veale who went close, Steff Davies sent in a volley which Jones just held and Jack Rimmer had a good chance saved once again by Jones.

Phillips found space, cut inside and fired a right footer just over the box in a frustrating watch for visiting fans – and then disaster stuck as Druids broke down the right and worked the ball across to Thomas on the left who finished low down to sneak the hosts into the lead.

Now Druids were keeping the ball well and Aber were facing devastation when Niall Flint was picked out and scored under Pennock for a three one lead.

Credit to Aber though who kept going, and six minutes after coming on Wynne on his return to The Rock danced around and found space in the box to smash home a thunderous volley from the right flank into the top corner of the net and breathe hope back into the Black and Greens.

The visitors knew a chance would come in the four minutes of injury time and indeed it did when Bradford won a crucial ball in midfield, Franklin sent in a super ball from deep and Jones nicked in to nod the ball past Jones and earn what could be a crucial point for Aber come the end of the season.