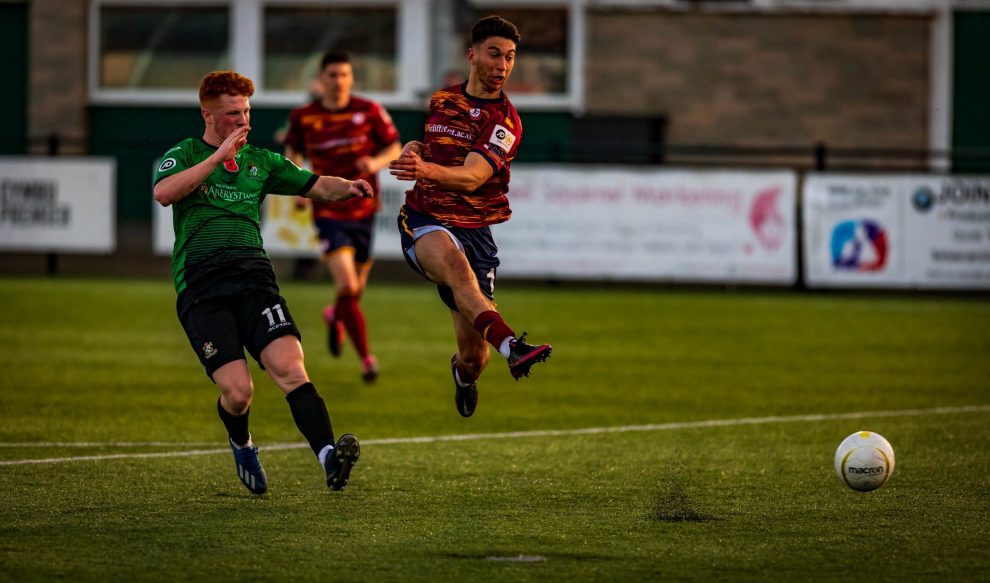 CARDIFF MET earned a point in their game with Aberystwyth Town on Friday night (Apr 23) thanks to Ollie Hulbert’s late finish.

Owain Jones’ header with ten minutes to go looked to have sealed the victory for Gavin Allen’s side but in added time, Hulbert, the man on loan from Bristol Rovers, lashed home an equaliser to earn a share of the spoils for the students from the capital.

Allen made two changes from Tuesday’s victory against Cefn Druids. There was a return to the starting XI for Harry Franklin having served a suspension and Rhys Davies lined up at centre back as a result of Lee Jenkins’ one match ban.

On a beautiful spring evening on the Cardigan coast, the first third of the affair passed by with little in the way of goal scoring opportunities. Smart defending from Matt Chubb and Jack Thorn prevented any chances developing in the area whilst Stephen Hewitt and former Seasider Dylan Rees had strikes from distance for their respective charges but failed to trouble the goal with their efforts.

At twenty minutes, Aber carved out the game’s first good opening. Sterling work by Jonathan Evans down the right hand side saw him deliver a well weighted cross into the area. Jamie Reed, a centurion on Tuesday night, was the man at the end of the cross but he couldn’t steer his header low enough to trouble Alex Lang.

Just minutes later, the Archers could have gone ahead with a strike that would have been in the running for goal of the season.

A well worked corner evaded everyone bar Kyle McCarthy at the far corner of the box. The full back thundered a powerful first time volley which thankfully, cannoned off the inside of the post and bounced to safety.

The Archers were boosted by this piece of magic and ended the half the stronger of the two sides. They enjoyed the bulk of the ball and had the Black and Greens pinned back in their own half.

Connor Roberts saved well one on one with Hulbert was as close as Christian Edwards’ men got to taking the lead in a half that ended goalless.

The hosts started the second half stronger and had two great opportunities with just five minutes played.  A long throw by Thorn was met by the head of Louis Bradford. The ball cannoned off the bar then onto the post and was cleared away for a corner.

From the resulting corner, Marc Williams met the delivery which looked certain to open the scoring. However, a superb clearance off the line kept the scores deadlocked but had Aber’s confidence up.

Minutes later, Met had a great chance of their own. Former Aber man Tom Price broke the offside trap but couldn’t muster a way past the imperious Roberts protecting the home goal.

Incredulously, last ditch defending came to the Archers’ rescue again. A deep cross from stand in centre back Davies evaded everyone in both red and green bar one defender on the line who was able to hook the ball away before it could find it’s home in the bottom corner.

The game was played at a quick tempo with both sides looking to play attractive football. Reed was replaced by Jones with twenty minutes to go as the Black and Greens hunted for a go ahead goal.

With ten minutes to go, the substitution paid dividends. A long ball from Thorn wasn’t dealt with by Lang or Brad Woolridge in the Met defence and Jones nicked in front of the both of them to head home his first in Aber colours.

The visitors were frustrated but sensed that there was still something in the game for them. Just seconds after the goal, Roberts again was required to save well; this time down low to his left from Hulbert.

With the game hurtling towards its conclusion, Aber looked to hit the corners whilst the opposition were throwing everything at the Seasiders and in the third minute of stoppage time, they got their reward.

A free kick inside the Aber half was played into the area. The half clearance found Hulbert who swivelled in the area before rifling a shot past a helpless Roberts in goal to break the hearts of the men from Ceredigion.