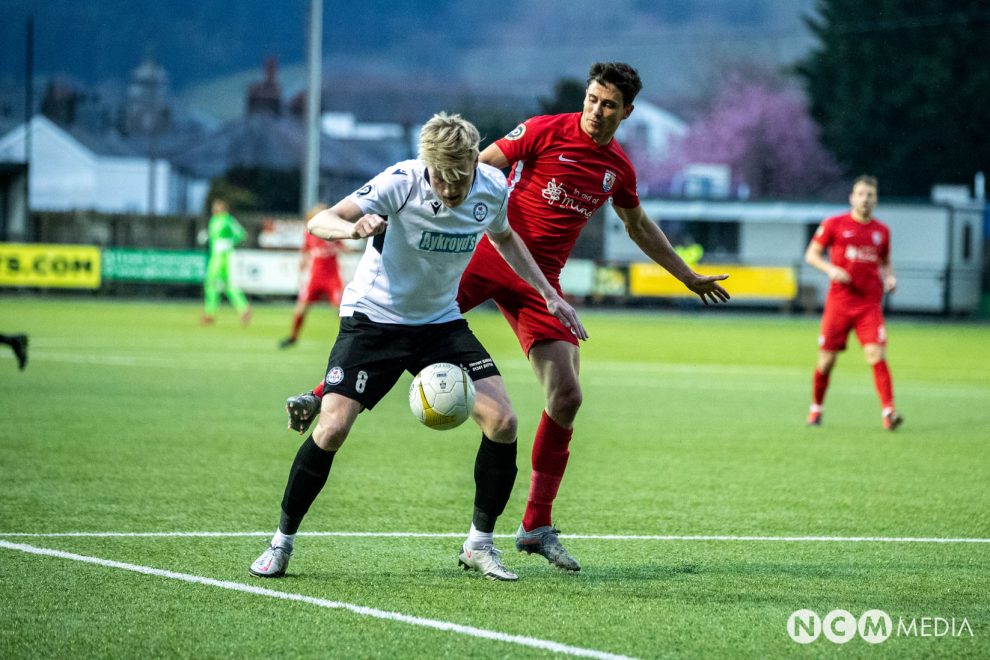 BALA TOWN withstood late pressure from league leaders Connah’s Quay Nomads on Wednesday night (Apr 28) as they held on for a 2-1 win at Maes Tegid.

The hosts made three changes from the side that beat Barry on the weekend as Jack Mackreth returned while Antony Kay and Sean Smith returned from suspension.

The Nomads made two changes from their weekend win against TNS as Danny Harrison and Aeron Edwards replaced Jamie Insall and Danny Davies.

Bala started the game well and it was Mackreth who had the first attempt of the match but his shot was blocked wide for a corner.

Henry Jones then sent a dangerous ball into the box but Nomads keeper Oliver Byrne did well to punch the ball away.

On 15 minutes, Aeron Edwards was forced off with an injury and Insall was brought on to replace him.

And just two minutes later the hosts took the lead. Will Evans saw a header saved well by Byrne but the ball then bounced in off Nomads defender George Horan for an own goal.

Kris Owens then swung a free kick into the area for Insall but he headed wide.

Michael Wilde, fresh from his hat trick against TNS, also came close but his header went wide as the visitors continued to search for a way back into the game.

Owens then tried his luck from a free kick but Bala keeper Alex Ramsay made a good save to keep the ball out.

It remained 1-0 to the hosts when the half time whistle went after what was a good opening 45 minutes.

The Nomads made two changes at the start of the second half as they looked to themselves on the scoresheet.

Both sides started the second half strongly but the first real chance went to the Nomads as Insall saw his header saved by Ramsay.

A minute later it was the hosts’ turn to have an effort on goal. The ball was swung in from the left and Will Evans’ header appeared to be looping in but for the hand of Byrne who tipped the ball over.

The Lakesiders were close again soon after when a corner into the box was met by Chris Venables, who is one shy of 200 league goals, but his header bounced out off the post.

Evans then dragged a shot wide on his weaker foot as they went in search of a second goal but they did not have to wait much longer.

On 72 minutes, Ollie Shannon raced down the right hand side, and put a ball right into the feet of Henry Jones who smashed the ball home.

It was a big blow for the Nomads but, six minutes later, they were given a route back into the game.

The Nomads won a penalty when Nathan Peate was adjudged to have handled the ball and he was subsequently sent off by the referee.

Callum Morris converted the spot kick and the visitors now had ten minutes against ten men to try and find an equaliser.

With five minutes to go the ball fell to Wilde but he volleyed the ball over the bar.

Five minutes of injury time were added on as the Nomads desperately searched for their second goal of the game.

With time running out the ball was sent into the box but Jamie Insall saw his effort bounce out off the crossbar.

That was the last of the action as Bala held on for an important win.