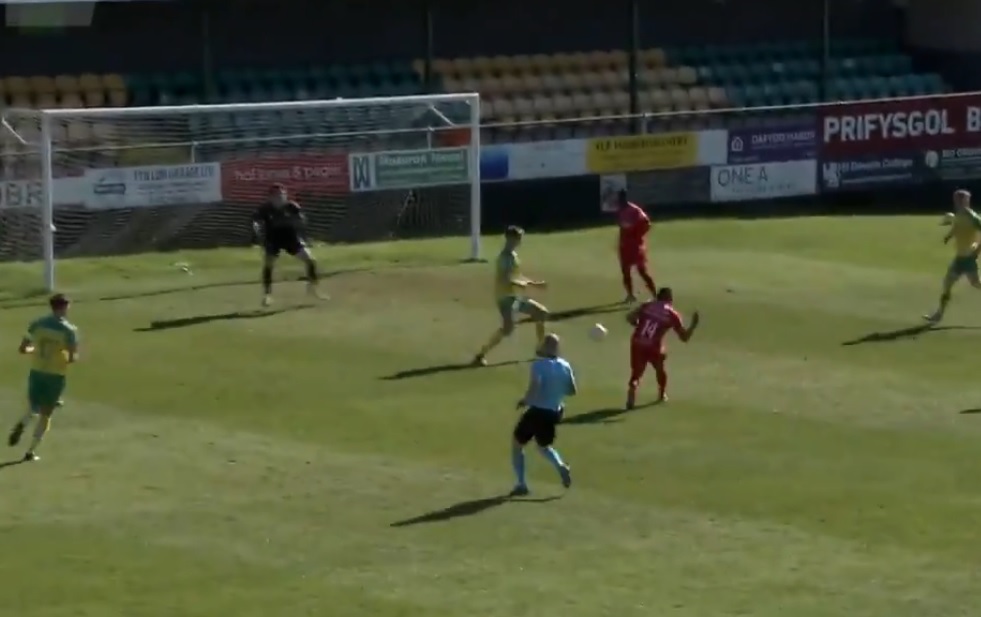 BARRY TOWN UNITED kept their European hopes well and truly alive on Saturday (Apr 10), as a last minute goal from Curtis Hutson saw them beat Caernarfon Town 1-0 at The Oval.

With a guaranteed European place now going to the team that finishes third, and, after Bala narrowly lost to The New Saints, Barry now sit three points behind the Lakesiders.

There was a cagey start to Saturday’s game as a Caenarfon corner was gathered by Mike Lewis who then made another good save to keep the score level.

Luke Cooper then saw a header saved by Caernarfon keeper Josh Tibbetts before, on 17 minutes, Kayne McLaggon put the ball in the back of the net only to see his effort ruled out for offside.

With thirty minutes gone, Paolo Mendes crossed into the box for Jack Kenny but he couldn’t get enough on his shot and the ball bounced wide.

Both sides looked to go forward in the remaining stages of the first half but the whistle went with the score still locked at 0-0.

Early in the second half, sub David Cotterill sent a corner into the box and after it wasn’t cleared the ball fell to Jordan Cotterill but he couldn’t get his shot away as the home side closed him down.

Jordan then saw a shot saved before David saw a free kick saved by Tibbetts.

With fifteen minutes to go the home side had another effort on goal but Tibbetts again made a good save to keep the score at 0-0.

It looked as if the game would end goalless but in the 90th minute the ball was played back to the edge of the box for Hutson who side-footed the ball into the bottom right corner of the net.

It sparked wild celebrations amongst the players and they were able to see the game out to seal the win.

On Tuesday, April 13, Caernarfon Town will look to get back to winning ways when they take on Connah’s Quay Nomads.

Barry Town will look for another win when they host TNS.