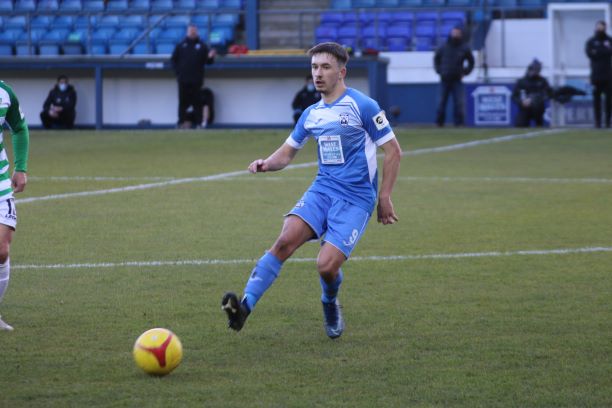 HAVERFORDWEST COUNTY got back to winning ways on Tuesday night (Apr 13) as they beat Aberystwyth Town 1-0 at the Bridge Meadow.

The Bluebirds were beaten by Cefn Druids on Saturday, while Aber also came into the game on the back of a defeat to Newtown.

Aber started the game on the front foot and came close with only three minutes gone when Marc Williams headed Matthew Jones’ corner towards goal but Bluebirds keeper Wojciech Gajda made a comfortable save.

With fifteen minutes gone, Danny Williams fired a cross into the six yard box but the ball sailed through without anyone getting a touch to it.

Two minutes later Aber came close again as some good play down the left set up Jamie Veale but he sent his effort just over the bar.

On 22 minutes, Cameron Keetch won the ball back and found Williams down the left who returned it to Keetch but his shot went just wide.

Keetch was at it again moments later after Williams’ back-heel in the box found him but the shot was wide once more.

Elliot Scotcher was next to have a go but his header was easily saved by Aber keeper Alex Pennock.

Pennock did well soon after as he gathered a dangerous low cross from Daniel Summerfield.

It remained goalless at the break with both sides still in with a chance of taking all three points.

Early in the second half, a corner to the back post fell to Jon Owen but his shot was saved well by Gajda.

Ten minutes in, it was the Bluebirds who got the all-important first goal of the game. Danny Williams went on a surging run down the right and he crossed into the box for Ben Fawcett who took a touch before turning and shooting into the bottom left corner of the net.

Fawcett was subbed on the hour mark and was replaced by Marcus Griffiths as the home side looked to freshen things up.

Both sides battled away but as the game entered its final five minutes, Aber began to get on top as they searched for an equaliser.

Sub Dan Cockerline showed good feet on the edge of the box but he could only fire his shot over the bar.

Harry Franklin then sent a dangerous cross into the box but Cockerline was unable to get on the end of it.

Aber pushed forward in injury time but the Bluebirds saw the game out to seal the win.

The win for the Bluebirds extends their lead at the top of the play-off conference to eight points.

On Friday, April 16, Aberystwyth will look to bounce back when they host Flint Town United.

On Saturday, April 17, the Bluebirds face Newtown at Latham Park, kick off at 5:15pm.