Home » Caernarfon move back into sixth with win over Bala 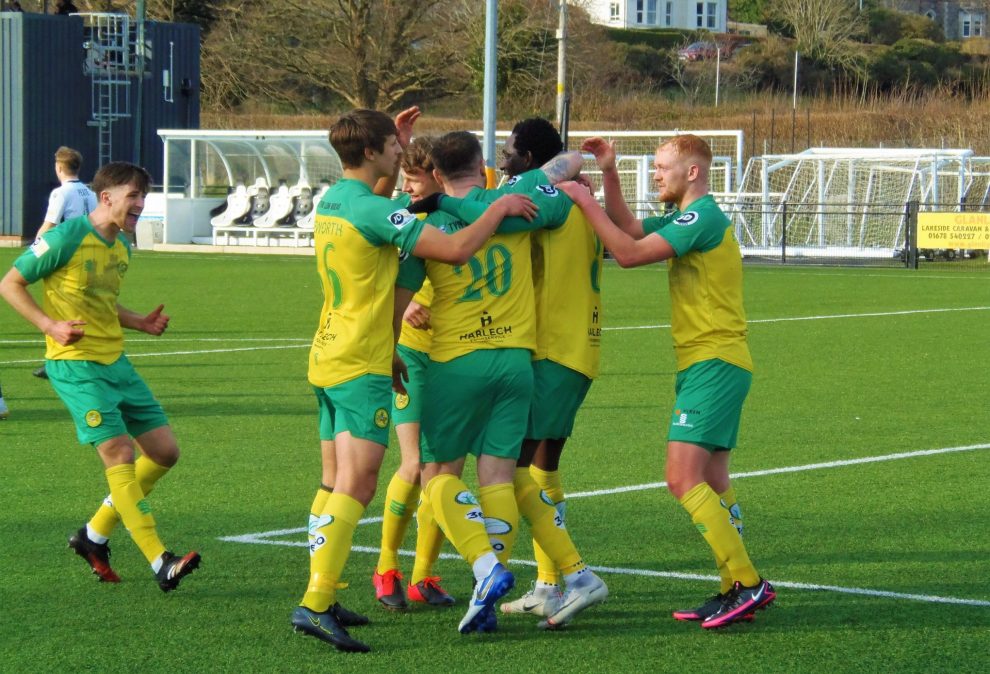 CAERNARFON TOWN moved back into the coveted sixth place in the JD Cymru Premier on Saturday (March 20) as they came from behind to beat third placed Bala Town.

There was some early pressure from Bala with a number of crosses being sent into the box but they were unable to get an effort on goal.

The first real chance of the game fell the way of the visitors as Telor Williams sent a corner into the box but Gareth Edwards headed wide.

With sixteen minutes gone, Bala took the lead as a corner from Oliver Shannon was headed towards goal by Will Evans and the ball bounced into the net off the unfortunate Edwards.

Moments later, Shannon sent in a free kick from wide on the left which was headed towards goal by Antony Kay but his effort was well blocked.

A foul by Noah Edwards in the D gave Bala another excellent chance but Chris Venables saw his strong free kick palmed away by Cofis keeper Jack Tibbetts.

Jack Mackreth then crossed into the box where Venables was waiting but he headed the ball just over the bar.

On the half hour mark Bala were forced into making a change after Raul Correia went off injured and Henry Jones was brought on to replace him.

There was a yellow card for Antony Kay in stoppage for a cynical foul but the free kick came to nothing and Bala went in at half time with a slender 1-0 lead.

Whatever Huw Griffiths said at half time seemed to work as Paulo Mendes found Mike Hayes on the right hand side and the former Bala player cut inside before curling a lovely left-footed shot into the far corner of the net.

That levelled the game at 1-1 but within minutes Bala could have regained the lead as a cross from the left was sent into the box but the unmarked Kieran Smith swung and missed the ball.

Midway through the second half, Smith sent the ball to Mackreth who then crossed into the box for Chris Venables but his effort was deflected wide for a corner.

With twenty minutes to go the visitors made two substitutions with Jake Bickerstaff and Cai Jones coming on.

And just seconds later Noah Edwards sent a ball into the box and the ball fell to the feet of Paulo Mendes who poked in to make it 2-1.

Caernarfon were inches away from a third as Bickersstaff’s cross-come-shot evaded everyone before trickling wide.

With nine minutes to go the ball fell to Telor Williams but his floated volley from distance went well over.

Four minutes of stoppage time were added and in the second of those the hosts very nearly equalised.

Mackreth crossed into the box for Henry Jones but his header was excellently saved by Caernarfon keeper Tibbetts who pushed the ball down into the path of Nathan Peate but he couldn’t get enough on the rebound and sent it wide.

The win moves Caernarfon back into sixth place in the table and they are now three points above Haverfordwest County.

Caernarfon are next in action on Saturday, March 27, as they host Cardiff Met in a game that kicks off at 2:45pm.