Home » Captain Allen at the double in Mumbles win 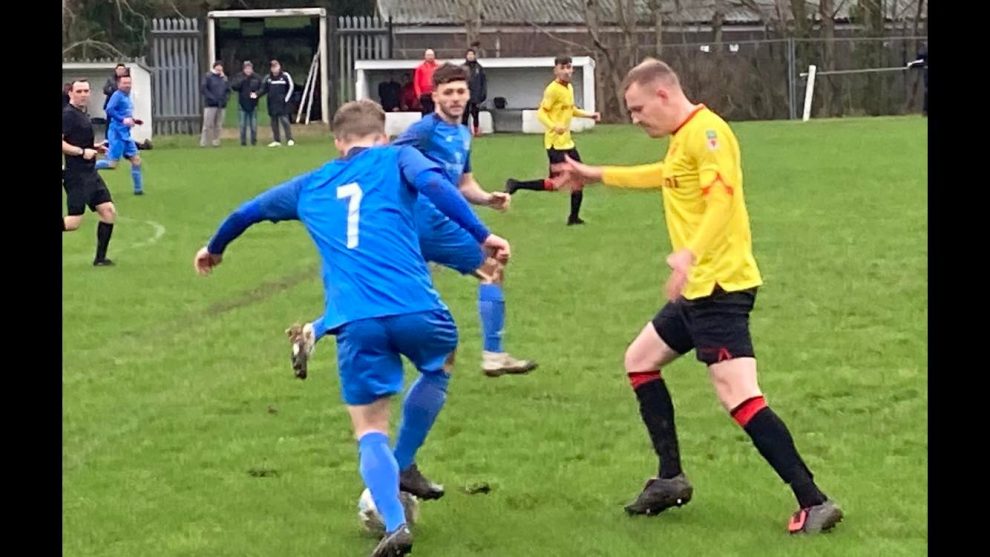 MUMBLES RANGERS were in search of an away win at Seven Sisters Onllwyn on Saturday (Jan 15) to keep up their West Wales Premier League challenge to the top teams.

Rangers knew they faced a difficult challenge against a team that produced a good performance in Mumbles earlier in the season as the two teams produced a 3-3 draw.

Rangers played the first half playing down the distinct slope of the home team’s pitch. However it was Seven Sisters/ Onllwyn who had the better of the exchanges in the first fifteen minutes of the game and were playing some controlled passing football from the back to front.

The home side’s pressure paid off when referee Ben Williams awarded a penalty kick for a trip on the attacker who was just inside the penalty area. Up stepped Seven Sisters/ Onllwyn’s Jack Owen who despatched his spot kick into the back of the Rangers net giving Rangers young goalkeeper Callum Andrews no chance of saving the powerful effort, 1-0.

The goal seemed to spark Rangers in to life and there was more cohesion to their play with Rangers midfielders Jordan Lloyd-Evans, Jake Simeone and Sam Evans starting to win the 50-50 challenges.

Rangers forward Elliot Smith was always proving a handful for the home defence down both flanks.

With 20 minutes played a Rangers cross was played into the Seven Sisters/ Onllwyn penalty area and Rangers central defender Liam Brown rose high in the air and was unlucky to see his header narrowly miss the goal.

Rangers did manage to get themselves back in the game when Rangers Captain and centre forward Chrissy Allen found himself in space and headed the ball passed the advancing home goalkeeper in an insouciant manner into the goal net to level the score at 1-1.

Rangers pressed hard before the interval and really should have taken the lead in the game when Rangers Captain Chrissy Allen had some good interplay passing with fellow striker Elliot Smith who found space and probably had too much time to despatch his shot towards goal but subsequently missed the opportunity.

The half time whistle blew with both teams thinking that there would still be opportunities to be had to win the game.

Seven Sisters/Onllwyn started the second half with pace and purpose down the slope and got their second goal of the game in the 53rd minute when their composed young central defender Steffan Jenkins started a move that led to a fine passing move from the right to the left sides of the pitch resulting in a low cross which was met at the near post by the pacy Nathan Jones who squeezed the ball inside the Rangers net to make it 2-1.

Rangers had to dig deep and literally get the ball back up to slope to their strikers. It took all of three minutes to adjust when the ball was played from the right into the path of Rangers’ Jake Simone who calmly applied the finish to level the score at 2-2.

Both sides to their credit pushed for the win but Rangers had the edge with Sam Evans controlling the pace and direction of his team.

Rangers struck gold in the 83rd minute when a pin point cross was fired into the home penalty area by Rangers right back Declan Banfield into the path of the on coming Rangers Captain Chrissy Allen who powered his header from distance into the top corner of the net, 2-3.

Rangers had the lead for the first time in the game and some determined defence enabled them to see the game out for a hard fought away win.