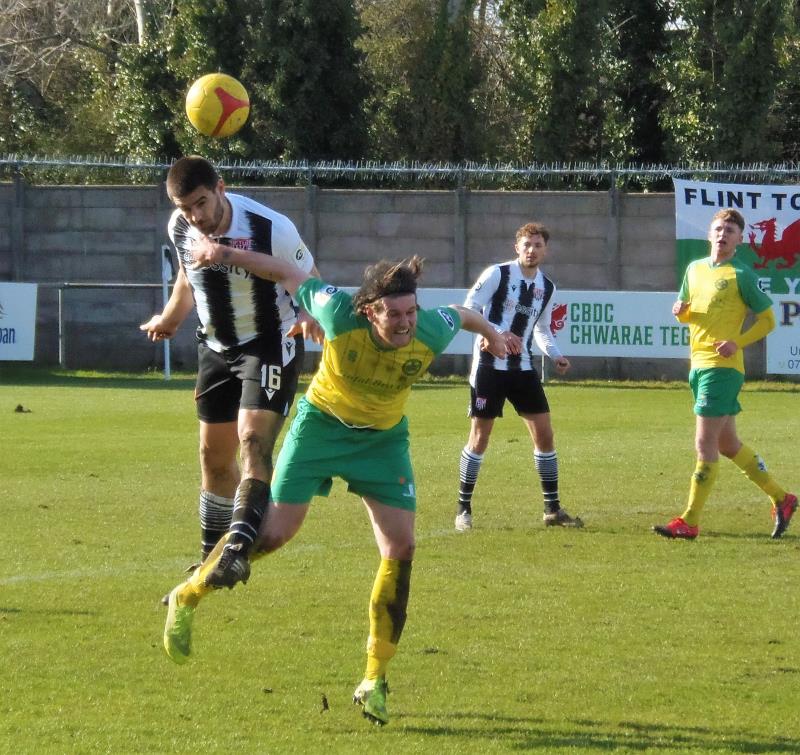 Flint narrowly lost to leaders Connah’s Quay Nomads and Caernarfon ultimately had too much in the tank for the Silkmen.

Manager Huw Griffiths made two changes to his starting line-up following last week’s draw with Abersytwyth, handing Wrexham loanees Max Cleworth and Jake Bickerstaff their first starts, and the team certainly proved him right, with a confident display from the off.

Flint goalkeeper Jonathan Rushton made the first of a number of fines saves in the eighth minute when he got down well to keep out a Bickerstaff effort, after the young striker had been set up in the box by Paulo Mendes.

The stopper was forced into another excellent stop six minutes later when he got his hand to a fine Sion Bradley shot after the winger had stepped off his left flank and into the penalty area before firing low towards the left upright.

Michael Parker got up well to reach a Telor Williams free kick in the box but his header flew directly into the hands of Rushton and for the home side, they finally got sight of Caernarfon’s goal in the twentieth minute, when Nash got on the end of a corner but saw his header cleared off the line by Gareth Edwards.

However, this was as good as it got for Flint in front of goal in the first half as the Caernarfon defence, boasting the dominant Edwards and Parker, dealt well with the hosts’ direct style of play. For Caernarfon, both Bickerstaff and Jack Kenny failed to beat Rushton with their on-target efforts and the Cofis will have felt frustrated not have entered half time with a lead.

Flint began the second period well and, for the only period in the game, enjoyed parity of possession during the first fifteen minutes after the restart. Town’s Josh Tibbetts smartly kept out a low Harwood effort in the fiftieth minute and, having stood up to Flint’s purple patch, Caernarfon went ahead shortly after the hour mark.

A floated Telor Williams corner into penalty area saw a melee of players challenging for the ball in the air but it was Paulo Mended who rose the highest, and he guided the ball past Rushton to give his side a deserved lead.

The goal had an immediate effect on the hosts and whilst they looked to go on the front foot to regain parity, they let themselves open at the back, and when Jack Kenny got his head on a clearance from the back, Bickerstaff was quick to find Bradley in the box and the impressive youngster confidently struck the ball past the onrushing Rushton and into the far corner of his net.

Although there was a quarter of the match still to play, there was a feeling that the second goal had put a huge dent in Flint’s confidence and self-belief and Caernarfon managed the remainder of the action confidently. Kenny and Hayes would have added to the score had it not been for some fine defending from the hosts, whilst Tibbetts made a late save to ensure a rare clean sheet for Caernarfon.

Huw Griffiths’ side will be back in action next Saturday, March 20, against title-challenging Bala Town in front of the Sgorio cameras, kick off 2:45pm.

Flint are also in action as they travel south to take on Penybont, kick off at 2:30pm.