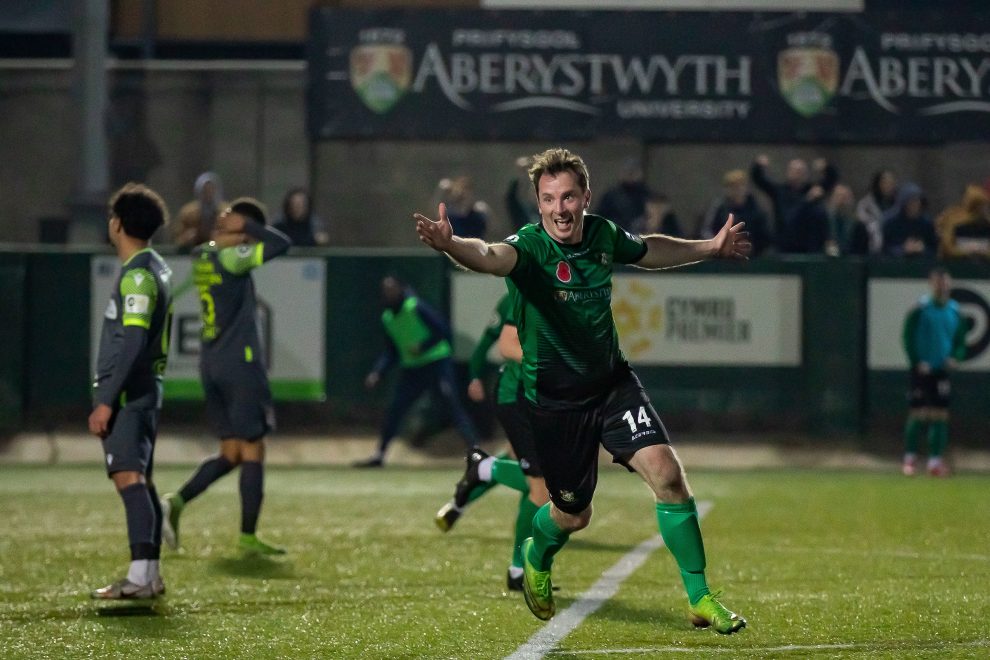 ABERYSTWYTH Town picked up a good win on Friday night (Mar 25), as they beat Barry Town 2-1 at Park Avenue.

Jon Owen gave the Seasiders the lead in the fifth minute and that’s how it stayed until Marcus Day’s 51st minute equaliser.

Then with twelve minutes to go Steff Davies nodded home a winner to send Black and Green supporters home delighted.

Boosted by a National Lottery promotion, a super crowd of 466 turned up at Park Avenue, as Gregor Zabret and Jon Owen returned to Aber’s starting eleven, with Ben Wynne also making a first start.

Loyal home supporters were rewarded with a stirring start, as Jamie Veale set a sighter over the bar, and then Wynne’s long throw bounced around the box only to fall nicely for Jon Owen in the right pocket to pounce and slam the ball under Mike Lewis, for an early lead.

Home pressure continued with Veale’s low effort stopped by Lewis, and the onetime Black and Green netminder was at it again soon after to gather Harry Franklin’s lobbed effort.

Then the visitors started to get into their stride. Left back Rhys Abruzzese went on a super run, and saw his curling effort saved by Zabret, with Nat Jarvis sending the rebound wide in a let off for the Seasiders.

A number of Barry free kicks and corners were repelled, with Rhys Davies and Louis Bradford looking impenetrable at the back. Barry were dominating possession, but Aber were still making chances: Franklin sent a long range volley wide, and Jack Rimmer saw two goalbound efforts blocked, before Wynne experienced the same – Lewis again to the rescue.

Aber seemed to be relishing the defensive battle, and once Michael George had fired over for Barry, the job was half done, and Aber went in a goal to the good at the break.

Aber started the second half brightly and Ben Wynne saw a header saved by Lewis from Matty Jones’ delivery.

Next blood was to Barry however as the impressive Marcus Day once again scored at Park Avenue with a 25 yard volley which bounced up wickedly to find a way in.

Davies saw a header saved by Lewis, and then earned a free kick which Jones was so unlucky to see bounce off the crossbar – almost a carbon copy to his winner in the first game of the season.

In a tense and exciting game Jack Rimmer got in well to deny Kayne McLaggon a shot, and Abruzzese sent a free kick over the bar for Barry.

Bradford was next to make a huge clearance for the Seasiders, and at the other end Lewis twice more denied Davies, once from a header and the second from a wicked volley.

Finally with twelve to go, Veale’s inswinging corner was nodded home by Davies, for significance, one of Aber’s goals of the season. Barry pressure from this moment was incessant, with eight minutes of injury time indicated after a medical emergency in the crowd.

However Aber gave a tremendous defensive display, and Jones, fed by Franklin, could even have snatched a third, but Corbs’ men held out for a huge win which once again has Aber looking upwards in the table.