Home » Defeat for Wales u18 in England friendly 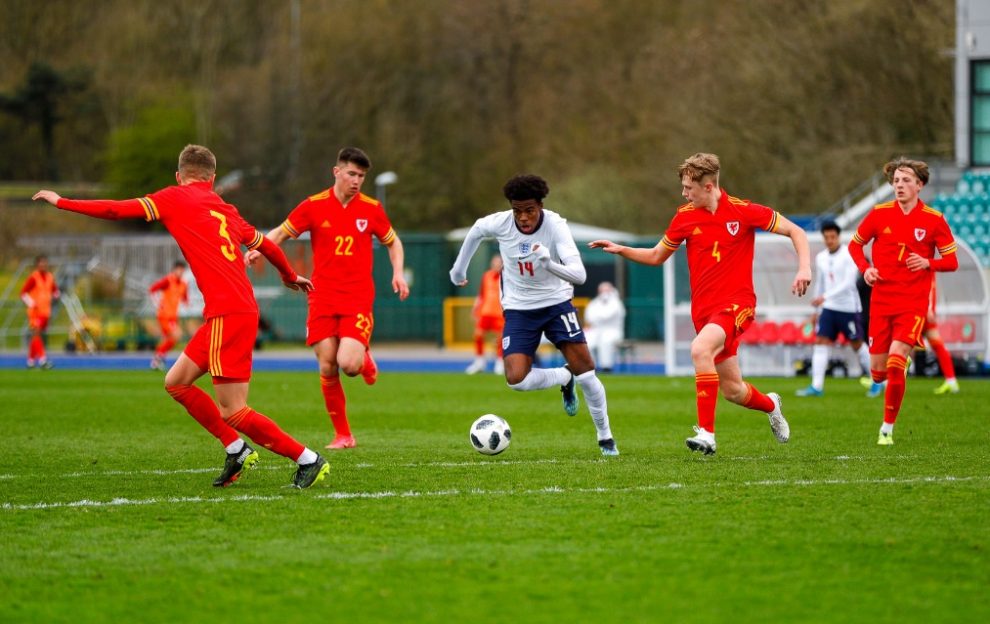 SECOND HALF goals from substitutes Liam Delap and Carney Chukwuemeka earned England a 2-0 win over Cymru on Monday lunchtime in this U18 international friendly, but there were plenty of positives for the home side to take from the defeat.

Playing their first game at this level since October 2000, Cymru could not have asked for a more difficult opponent in England, but put in an encouraging performance at the Leckwith Stadium in Cardiff.

The U18 team has been reintroduced in order to align with the changes in UEFA’s tournament structure, and Cymru can be optimistic for the future on the back of this initial showing.

Despite England enjoying the majority of possession in the opening exchanges, Cymru remained disciplined and organised, restricting the visitors to little more than an early corner, while also asking questions of their own at the other end of the field.

Charlie Savage combined well with Ryan Viggars through the middle, while Tom Davies enjoyed his licence to push forward on the left.

Chris Popov was also influential for the home side in attack, with Keelan Williams capitalising on his hold-up play to put a testing delivery into the England penalty after 15 minutes.

The visitors responded through Alex Robertson, but his long-range effort sailed wide as both teams began to settle into the match after a cautious start.

On 17 minutes, Cymru were awarded a penalty for a trip on Popov, but goalkeeper Hubert Graczyk denied Viggars from putting his side ahead with a save low to his left.

England had a good chance to open the scoring midway through the half when Shola Shoretire found Louie Barry in space, but the striker fired over the bar.

Cymru goalkeeper Max Williams had to be at his best on 33 minutes to save from Daniel Jebbison as England began to assert themselves on the game, while Barry remained a constant problem for the Cymru defence and tested the goalkeeper in the process.

However, captain Keelan William struck the England post and Taylor Jones headed narrowly wide just before half-time to show they were still very much in this game.

England made wholesale changes at the break with 10 players introduced from the bench, but it was Cymru who almost took the lead when Viggers and then Popov both tested replacement England goalkeeper Tobi Oluwayemi with the visitors still adjusting to the number of changes to their line-up.

England were awarded a penalty on 66 minutes when goalkeeper Max Williams brought down Liam Delap, and the striker dusted himself down to convert with a well-struck spot-kick to give his side the lead.

Kwadwo Baah and Alex Scott almost doubled the advantage minutes later as England began to control the game and increased the pressure on the Cymru defence.

Scott’s creativity was a concern for Cymru while Samuel Edozie came close on 76 minutes but failed to hit the target as England dominated possession and the home side made a number of changes from the bench.