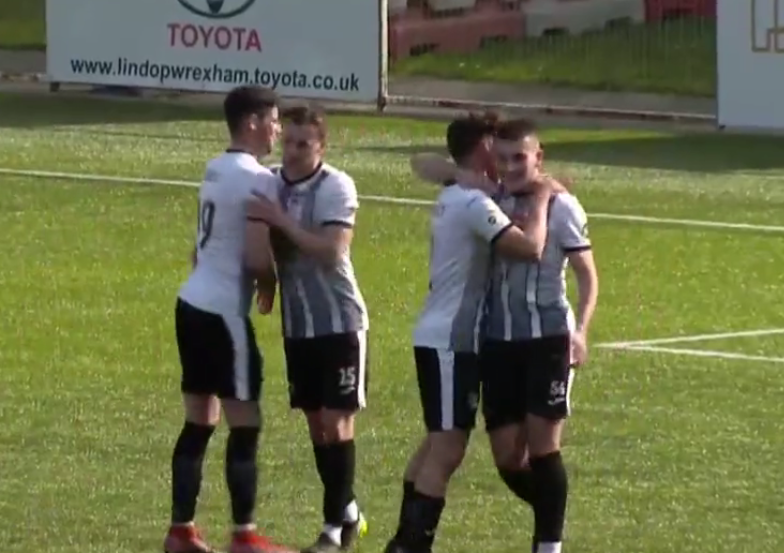 AT the 26th time of asking, Cefn Druids finally scored their first win of the season on Saturday (Mar 26) as they beat Cardiff Met 2-0 at The Rock.

The Druids’ relegation from the JD Cymru Premier has already been confirmed and they came up against a Cardiff Met side that had been unbeaten in 11 games.

The Druids side featured seven teenagers but they were unfazed as they started confidently.

The Met had a good chance early on but saw the ball headed off the line by the Druids defender Nacho Torres.

A fantastic diagonal ball then found a surging Liam Thomas on the left flank, but his run into box was halted by great Met defending. However, he managed to fire a shot off, and although blocked, the ball landed in the path of Edge whose headed effort was saved.

On 13 minutes the Druids were awarded a penalty when Liam Buckley was fouled and Niall Flint slotted the spot kick into the net.

Moments later, captain and keeper Michael Jones made an excellent save to keep the Druids ahead.

Midway through the first half the Druids were given another penalty when Met’s Joe Evans prevented a goalbound shot going in with his hand.

Evans was sent off and Flint converted from the spot to put Druids in a strong position at 2-0.

Charley Edge looked to add a third for the home side but his curling effort was saved.

At the other end keeper Jones made another good saved to keep his clean sheet in tact.

Jones was at it again in the second half as he again saved to keep the score at 2-0 as Druids’ hopes of a first win began to grow.

With thirteen minutes to go a good move by the Druids saw the ball eventually fall to sub Taylor Thain but he shot over the bar.

The Met had a chance moments later but a free kick into the box was dealt with well by the Druids defence.

Eliot Evans then had another chance but he curled an effort wide of the goal.

The full time whistle went and the Druids celebrated their first win of the season.