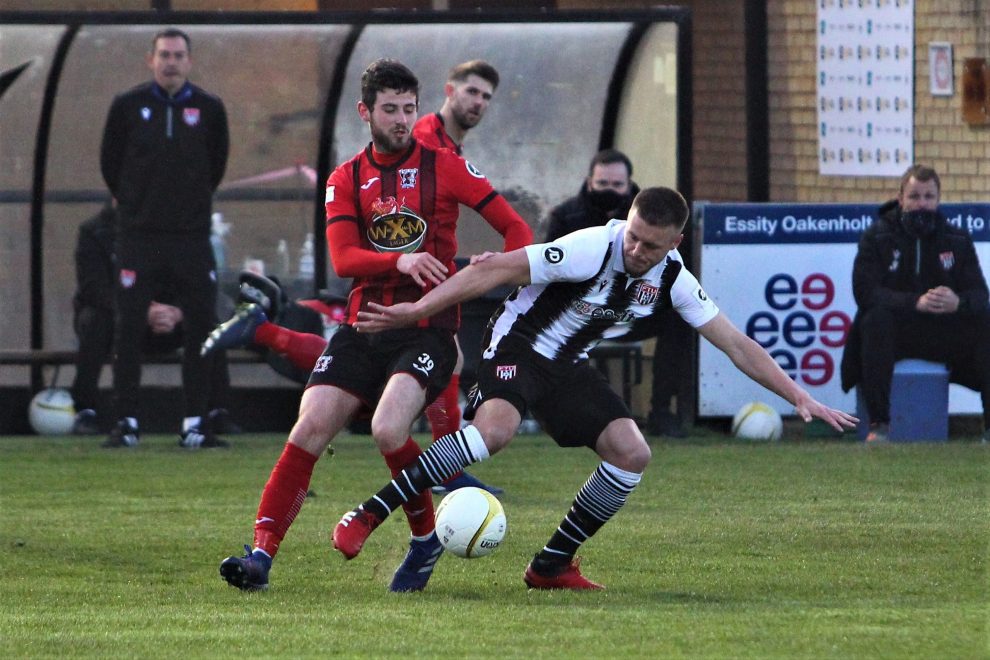 The Silkmen have won their first two games in phase 2 and they picked up where they left off on Saturday.

They showed early intent with particular success coming down the left hand side. Eddie Clarke showed his pace and skill from the off winning a couple of free kicks and corners which put Druids on the back foot straight away.

It was down the left flank where the first goal came from too. Harwood worked hard beating two men, before crossing a ball to the back post where Josh Amis cleverly turned it back across goal for Mark Cadwallader to smash home inside the 6 yard box after just 7 minutes.

The home side’s lead was nearly doubled almost instantly, following a Ben Maher free kick which was lifted into the box and tucked home by Sam Hart from close range, only for the Assistant to flag for offside.

It wasn’t long before the pressure paid off once more though. Druids’ centre back lost possession in the middle of his defensive half to Josh Amis who ran clear before slipping in Conor Harwood to cleverly stick it past the keeper to double Flint’s lead.

Flint started the second half in similar fashion to the first, allowing the Druids side no time on the ball. Harwood created the first chance of the second half after some more strong work at the by-line to get through two challenges and pull the ball back, but nobody was able to convert.

Moments later, Eddie Clarke was at it again beating his man and firing a ball into the box only for the centre back of Cefn Druids to divert it past the far post, albeit rather fortuitously.

The biggest chance since the start of the second half fell to Harwood who again found himself 1v1 with the goalkeeper after an Amis through ball had found him. However, this time he was unable to convert, and Mike Jones saved the effort.

On 67 minutes, a free kick was played deep into the box and when a header was missed, Amis showed his killer instinct by letting the ball bounce across his body before unleashing a half volley into the far corner of the net to score his first goal for the club.

Stand in captain for the night Ben Maher added a fourth late on when he picked up a rebound on the edge of the box and fired into an empty net to round off a fantastic midfield display.

It wasn’t over there though. Callum Bratley battled extremely hard in the midfield to win possession and then play in Jordan Buckley down the right hand side, who after coming off the bench, made no mistake in firing hard and low beyond Jones who had endured a torrid night in between the sticks.

Flint will look for a third win in a row when they travel to Park Avenue on Friday night (Apr 16) to take on Aberystwyth Town.

The Druids will now look to get back to winning ways and on Saturday, April 17, they host Cardiff Met.