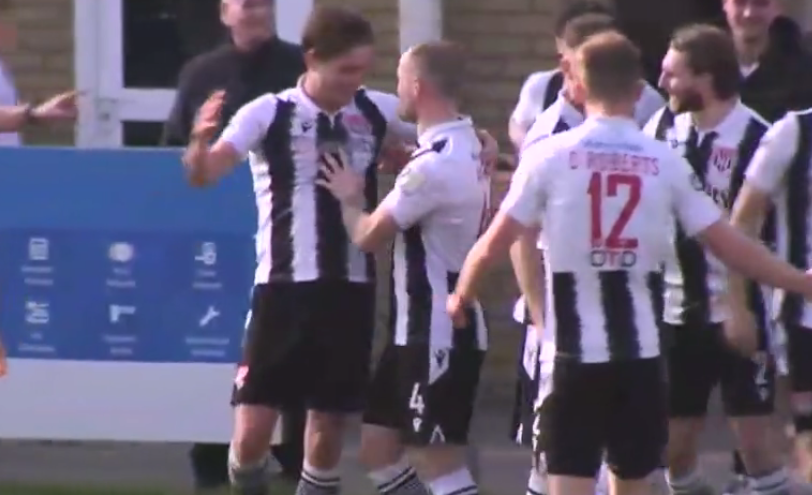 AN opportunist strike by Mark Cadwallader gave Flint a deserved win over Penybont as the Silkmen chalked up their first points in the Championship Conference section of the league.

But for four goal line clearances by Penybont, the winning margin could have been much greater, as Flint upped the ante in the second period after a fairly even first half.

In the end they had to settle for just the one game, which arrived early in the second half, when a miscued clearance by Bont keeper Ashley Morris was delivered straight to Cadwallader, who gobbled up the opportunity.

The visitors went close on four minutes, when Lewis Clutton hit a 16 yard strike that seemed destined for the bottom corner, until Jon Rushton stretched out a hand to make a fine one handed save and deflect the ball out for a corner.

Flint’s first chance came on 9 minutes, when Callum Bratley delivered a teasing ball to the far post, and Alex Jones was just a whisker away from making contact with his head, but it just eluded him and ran out of play.

On the quarter of an hour mark, Jack Higgins, a late replacement in the starting line up, when Kai Edwards got injured in the warm up, forcing a rejig in the Flint formation, spurned a golden opportunity for the hosts.

Cadwallader squared the ball perfectly into his path, and from 8 yards out in a central position he had the goal at his mercy. A shot either side of Morris would surely have found the net, but instead he shot straight at the keeper, who saved with his legs. The incoming Alex Jones latched onto the rebound but was unable to direct his effort on target.

Neither side were able to create any further clear cut chances in the remainder of the first half, although there was a lot of physicality on display as both sets of forwards and defenders fought for supremacy in their respective battles, with Ben Nash, in particular, standing up well to the considerable challenge of containing Sam Snaith.

Flint’s goal arrived just 3 minutes into the second half, a moment that ‘Bont keeper Morris will no doubt quickly want to forget.

A routine clearance from a back pass went horribly wrong when he played it straight to Cadwallader, who kept his composure to slot it straight through the keeper’s legs and put his side in front.

A couple of minutes later, Cadwallader was almost on target again, when getting on the end of a Jake Phillips corner, his effort was cleared on the line by Nathan Wood who was stationed on the post.

Flint were now starting to dictate play, and desperate goal line clearances were becoming the norm.

Just after the hour mark, Dan Roberts sent in a scudding low shot, that took a deflection and looked to be heading in, but Dan Jeffries came hurtling back to clear off his goal line in the nick of time.

Then, a minute later, Nash saw his stooping header cleared off the line, as Flint cursed their luck once again. On 65 minutes, Cadwallader looked as though he was going to score with a close range header following another corner delivery, but somehow Kane Owen got in yet another block on the line to deny the Flint striker.

The only worry now for the home side was whether they would be made to pay the price for not converting one of these chances.

As the game entered the last 10 minutes, Penybont started to look more of a threat, but the Flint rearguard stood up to the test well, and the only real chance they managed to carve out came from an Owen free kick that was delivered into the box and flicked into the path of substitute Ben Ahmun, but he failed to get a true connection from 6 yards out, and Rushton pounced on the ball.

Despite a healthy dose of stoppage time, Flint safely held on to secure their first win of phase 2, to the relief and delight of supporters and coaching staff alike.