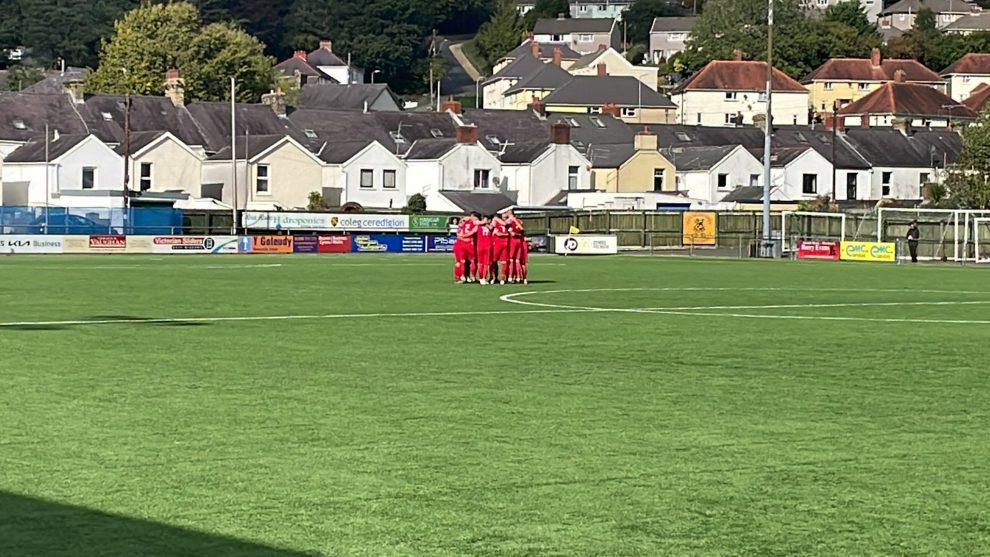 After the impressive performance last week against Ynyshir Albions, Carmarthen supporters might reasonably have been entitled to anticipate a similarly agreeable display in this match against mid-table Afan Lido – sadly, that did not happen.

In the early the stages the match quickly developed into a rapid end-to-end affair although the visitors, clearly, were more creative and penetrative in their movement. On 7 minutes Ioan Evans cut inside from the left touchline and from the corner of the penalty area struck a low drive that goal-keeper Ifan Knott, at full-stretch, turned around the post.

However, in the 9th minute Afan took the lead when a corner-kick was fired into the packed goalmouth and Ben Keen reacted quicker than any Town defender and from close-range drove the ball beyond Knott’s reach and into the far corner of the net.

And on 15 minutes they should have drawn level when Gibbings made a strong run along the right-wing before sending an inviting cross into the goalmouth only to see Daley, with a virtually open goal ahead of him, contrive to miss the ball entirely allowing goal-keeper Steve Cann to claim it.

Then after 20 minutes Gibbings, from wide out on the right-flank, crossed the ball into the penalty area where Daley, from 10 yards, sent his looping header over the bar. And Town, in this period of play, continued to search for an equalising goal – in the 29th minute Sam Parsons, from near the touchline, delivered a free-kick deep into the packed goalmouth only to see Scott Tancock plant his close-range header narrowly over the bar.

During that spell the visitors continued to enjoy periods of possession albeit without managing to threaten the Carmarthen goal in any serious way. However that all changed in the 46th minute. A huge clearance upfield out of the visitors’ half was pursued by two Town defenders and Lido striker Liam Griffiths – and Knott also chose to race way out of his penalty area. Almost inevitably Griffiths reached the ball first and, with impressive precision, from just outside the centre-circle he fired it into the empty goal.

After the interval the Old Gold were quick to put pressure on the visitors’ defence and in the 48th minute a slick cross-field move involving Gibbings and Walters led to Delaney, from 25 yards firing the ball over the bar

this match evaporated in the 60th minute when a sequence of defensive errors inside the penalty area culminated in Lido striker Ioan Evans, with the ball at his feet and an invitingly empty net – inevitable result 3-0.

And to further compound the misery for the home crowd Carmarthen were awarded a penalty in the 77th minute. Normally this would be a formality to for all-time top scorer Liam Thomas to undertake but not on this occasion – he failed the task.

That typified so much of Town’s performance in this match in which they were outplayed for much of the time.

Carmarthen’s next fixture is a Welsh Cup 2nd round tie away against Newport City on Saturday, October 8.