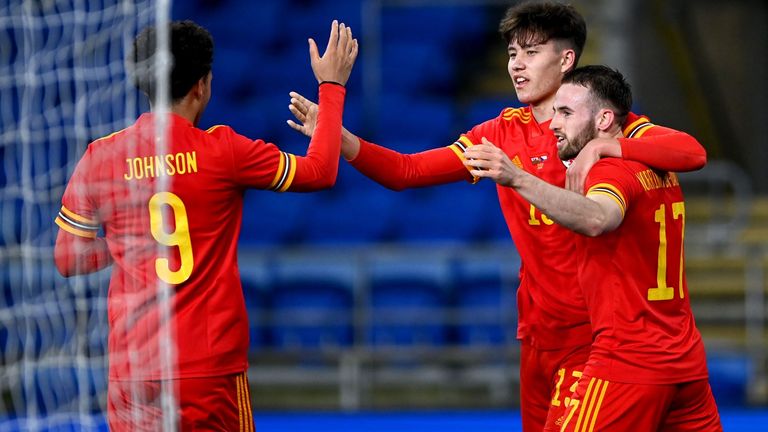 Wales maintain their unbeaten home record as a youthful squad draw 1-1 with Czech Republic at the Cardiff City Stadium.

Wayne Hennessey made his 100th cap as he captained the side, becoming only the third ever player to do so – joining Chris Gunter (107 caps) and Gareth Bale (102 caps) in the centurion club.

The friendly was arranged at short notice following the postponement of the Scotland-Ukraine World Cup play-off match, of which Wales await the winner in the final after defeating Austria 2-1 in their semi-final.

Both the Scotland/Ukraine semi-final and the final will take place in June, where the winner will secure a spot in the 2022 Qatar World Cup.

Wales made 10 changes to the starting lineup as Rob Page opted for a youthful side, resting the majority of senior players that played in the Wales/Austria semi-final – including Gareth Bale, Aaron Ramsey, Connor Roberts and co.

Brennan Johnson and Rabbi Matondo started up front in a 3-4-1-2, with goalscorer Rubin Colwill in behind. Fellow youngsters Rhys Norrington-Davies and Sorba Thomas started in midfield alongside Will Vaulks and Joe Morrell, with Ben Cabango joning Chris Gunter and Chris Mepham in defence.

Czech entered the game in a 3-5-1-1, with West Ham midfielder Thomas Soucek playing in the centre of the midfield. Jan Kuchta led the attack up front, with Jakub Pešek as second striker in behind. Jaroslav Zelený and Lukáš Masopust set up on the flanks in front of Jakub Brabec and David Zima, who joined Tomáš Petrášek in the back three.

It was Czech’s second visit to the CCS in 12 months, where Dan James scored the winner in March 2021, and they started strong. Wayne Hennessey was busy in the opening stages, forcing saves from close range attempts from Jaroslav Zeleny and Jan Kuchta. Michal Sadílek also increased the pressure with shots outside the box, but couldn’t hit the target.

Rabbi Matondo hit the target in the 28th minute with a right-footed shot from the left side of the box, but the attempt was saved by Jindřich Staněk.

In the 32nd minute, Czech Republic broke the deadlock and made it 1-0 through star player Tomas Soucek – scoring from inside the box.

It took just two minutes for Wales to equalise, as 19-year-old Rubin Colwill scored from a Brennan Johnson pull-back to escape the Czech keeper and make it 1-1.

Just before halftime, Will Vaulks nearly made it it 2-1, hitting the post from outside the box. The whistle blew minutes later. Halftime 1-1.

Czech Republic entered the second half with three substitutions, with Jan Sykora, Tomás Vaclik and Vaclav Jurecka all introduced. It didn’t take long for Sykora to make an impact either, as he hit the left post from inside the box in the 49th minute.

A flurry of attacks from Wales followed, as Rhys Norrington-Davies, Will Vaulks and Brennan Johnson all enjoyed shots towards the net – but couldn’t force any saves with all attempts going to the left.

Brennan Johnson hit the target in the 59th minute from outside the box, but was swiftly saved by substitute keeper Vaclik.

More substitutes followed, as Ethan Ampadu and Joe Rodon replaced Vaulks and Gunter. Wayne Hennessey also made way for Adam Davies to end his contribution in his 100th cap appearance.

Just shy of the 80th minute, Tomas Soucek’s shot on target was saved by Davies to keep the sides equal. Mark Harris and Gareth Bale then came on for Rubin Colwill and Brennan Johnson.

It didn’t take long for Bale to make his presence known, with two shots on target in one minute made towards both corners of the goal.

Joe Morrell’s shot from outside the box in the 91st minute was the last strike of the game, ending 1-1 at the full time whistle.

In a post-match interview, Rob Page praised the efficiency of the youngsters:

“We used it as an exercise to look at some of the younger players. When you’ve got a front three like that you know you’re going to pose a threat and cause problems” he said.

“Rubin’s intelligent at 10, Brennan’s in great form in the Championship, and Rabbi’s playing well abroad (in Belgium), creating chances and scoring goals.

“I didn’t need any convincing with Brennan, he’s humble and not getting carried away with what he’s done. He’s a bright spark, as is Rubin who took the goal really well, and Rabbi with his pace was also a threat.

“There were some big performances out there. I said before the game there was an opportunity there for the players. We’ve got a massive month in June with the World Cup play-off final and four Nations League games, so we’re going to need a big squad.”

Wales now look forward to one of the biggest games in Welsh history – the World Cup play-off final.

Having beat Austria 2-1 on Thursday, the Welsh await the winner of the Scotland/Ukraine semi-final, set for June.

In the semi-final, Gareth bale scored twice – with a glorious free kick setting the scene for Wales’ current form.

The date for the final will be established in the following days after the semi-final, with the match set to be under the glorious summer sun at the Cardiff City Stadium.

It is a night to be remembered, and we can’t wait for a huge night of Welsh football.