Home » Newtown leave it late to see off Aber 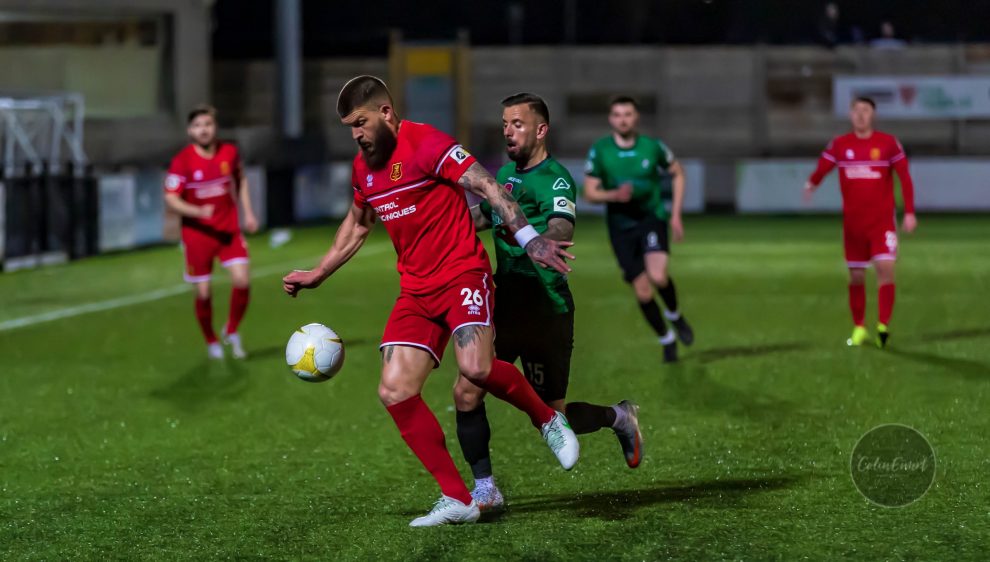 NEWTOWN scored a late winner as they got phase two of the JD Cymru Premier season off to the perfect start at Park Avenue on Friday night (Apr 9).

With their rivals not playing until Saturday it was the perfect opportunity to close the gap to play-off conference leaders Haverfordwest County.

The first chance of the night fell to Aber winger Owain Jones, who cut inside his man but could only drag his shot wide.

At the other end, Callum Roberts forced a smart stop from Pennock, making his first appearance since late November.

After half an hour, the visitors had the best opportunity of the half. Former Seasider Craig Williams’ cross from the right hand side was met by a glancing header from Nick Rushton but the experienced JD Cymru Premier talisman was unable to get his effort low enough as the ball landed narrowly over the bar.

With just seconds left to play in the first period, Aber took the lead. Matthew Jones’ corner from the left hand side was met superbly by Williams who powered his header into the far corner of the goal.

If Chris Hughes’ side were feeling sorry for themselves at going in behind at the interval, it didn’t show as they came out after half time in a calm and composed manner. The visitors were comfortable with the ball which they enjoyed for huge sums of the second half and pressured the Aber goal throughout the half.

Tyrone Ofori, Roberts and Alex Fletcher all went close for the visitors but could not get the goal they were looking for.

Aber’s main attacking threat was coming through long balls and with the experience of Shane Sutton and Kieran Mills-Evans to contend with, Jonathan Evans did well to continue to ensure Gavin Allen’s men still had some sort of chance at doubling the lead. In fact, the Seasiders’ best chance of the second half fell to the former Penrhyncoch man but he could only curl his shot wide.

With the game progressing into the final quarter of an hour, the Robins’ pressure finally relented when Ofori, who’d been busy throughout, beat Pennock with a close finish to level the contest.

A draw suited neither side and both sides were desperate for three points to keep the pressure on Haverfordwest County in 7th and both sides had chances to get the victory.

Pennock tipped a Jamie Breeze header superbly onto his crossbar, Thorn heroically blocked an Evans shot to keep the scores level. For Aber, a free kick was pumped into the box but the visitors were able to deal with the set piece well.

But with seconds to go, the Robins earned the three points and the bragging rights. A slack pass inside the Aber half was pounced upon by Evans. He drove at the Black and Greens defence before unleashing a powerful drive into the back of the net; sparking jubilant scenes from the men in red around Park Avenue.

It was Aber’s first home defeat since mid-December but the Seasiders will look to bounce back when they take on Haverfordwest County on Tuesday night.

The win for Newtown moves them to within six points of Haverfordwest County. On Tuesday, the Robins travel to Cardiff Met.