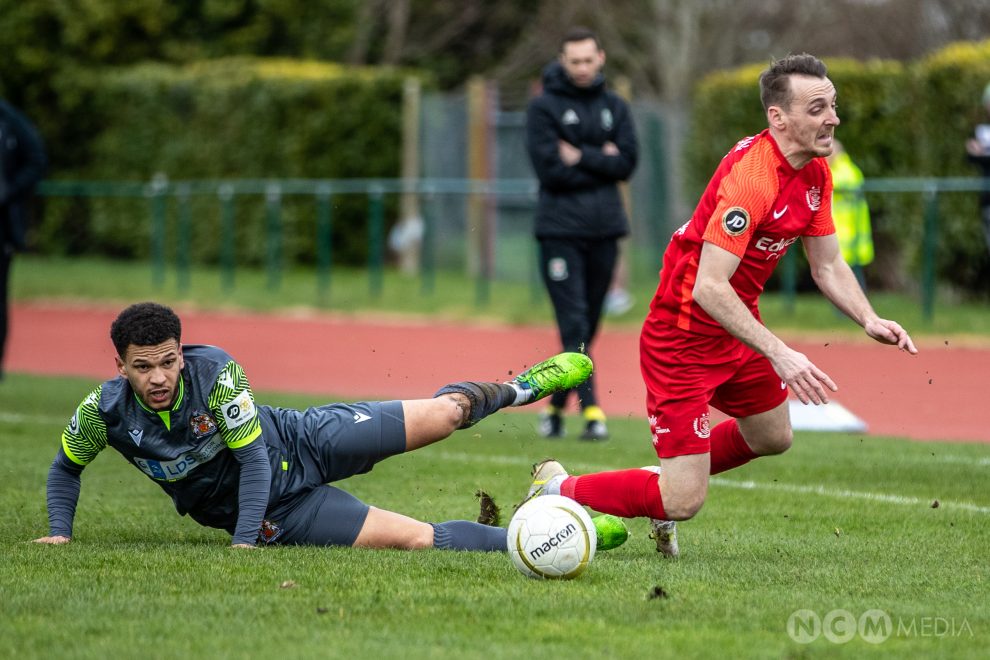 CONNAH’S Quay Nomads defeated Barry Town 2-0 on Saturday (Mar 12) to further boost their hopes of getting out of the bottom two in the JD Cymru Premier play off conference.

The Nomads came into this game on the back of a spirited Phase Two opener as they picked up a point away to Cardiff Met at Cyncoed last weekend.

This fixture saw Craig Harrison make two changes as Ollie Byrne and Craig Curran returned to the starting eleven as well as a return to the bench for Paulo Mendes who has missed the last few games due to injury.

Barry Town suffered defeat in their first match of Phase Two last weekend as they lost 1-0 at home to relegation rivals Haverfordwest. Barry forward Jordan Cotterill picked up a red card in the loss to Haverfordwest meaning he was unable to play in this match.

The Nomads almost got off to a dream start in the first few minutes as they earned themselves a dangerous free kick which Kris Owens took but Absalom made a crucial save at the far post.

Nomads came close again as Callum Morris got a touch on John Disney’s delightful cross but as Craig Curran slid in, he could not get the all important touch and Barry were able to clear.

Barry’s top scorer Kayne McLaggon then intercepted Danny Holmes’ long ball but as McLaggon raced through, he conceded a foul and the first signs of pressure from Barry were halted.

Jamie Mullan showed his attacking prowess as he skipped past his man, delivering towards the back post where George Horan was lurking but Curtis McDonald nodded clear.

Kayne McLaggon picked up a yellow card in the 23rd minute as he applied pressure on George Horan but McLaggon caught the Nomads captain in the face and with no hesitation, the referee pulled out his yellow card.

This was shortly followed by another yellow card for Barry as Rhys Kavanagh conceded a foul in a dangerous position on the edge of the box which Kris Owens was instantly eyeing up.

Nomads’ hard work paid off as Kris Owens opened the scoring through a spectacularly curled free kick past the wall and into the bottom corner leaving Barry keeper Kelland Absalom no chance.

This was the last of the action for the first half and Nomads had taken a well deserved lead after Kris Owens’ brilliant free kick in the 36th minute.

Nomads kicked off the second half with a series of close chances as Danny Holmes’ cross somehow almost crept in and Callum Morris’ long range effort which sailed wide of the post.

The 54th minute saw The Nomads double their lead as Byron Harrison broke through on goal after Barry were unable to clear Kris Owens’ long ball, leaving Harrison one on one with Kelland Absalom and Harrison kept his composure as he placed a delightful lob into the back of the net.

Just five minutes later, we almost witnessed another wonderful Nomads goal as Byron Harrison found Declan Poole inside the area but Poole’s overhead kick attempt was tipped over by Absalom.

Caluml Morris almost got on the scoresheet as Byron Harrison flicked on Kris Owens’ corner but Morris’ powerful header skimmed the top of the crossbar and out for a goal kick.

With ten minutes to play, Barry made their first two changes as Micheal George and Rhys Abbruzzese were introduced onto the pitch in place of Marcus Day and Harry Jones.

The full time whistle then blew and unlike the last meeting between these two sides at Deeside, Nomads were able to see out the game and earn themselves all three points after spectacular goals from Kris Owens and Byron Harrison securing a 2-0 victory which means Nomads close the gap to Barry to just three points.

The relegation battle continues on Tuesday 15th March as Nomads host Cefn Druids at Deeside with Druids still looking for their first win of the season so Nomads will be searching for another important three points.