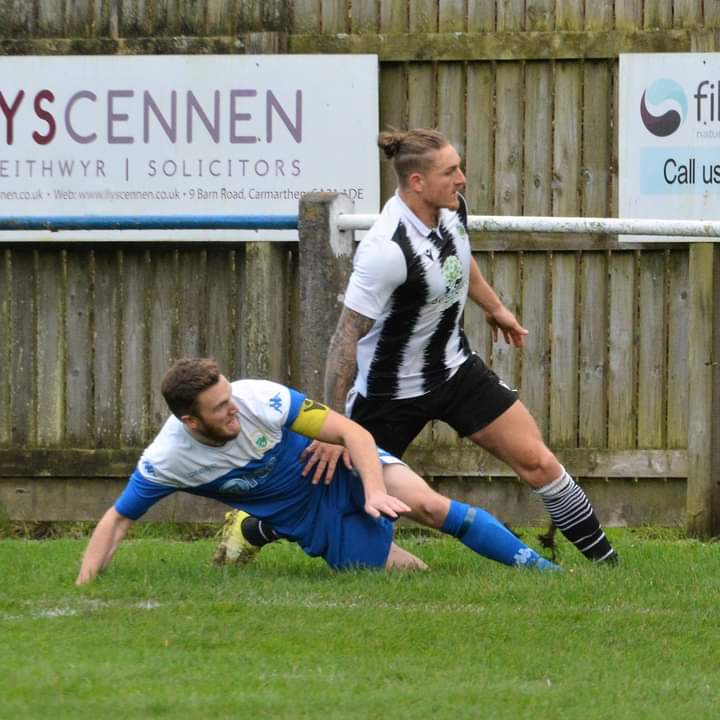 WITH both sides needing points, albeit at different ends of the table, this local derby went the way of the visiting Pontardawe side who did the damage in a dominant opening 25 minute spell.

Cwmamman were slow out of the blocks as Ponty found their rhythm almost immediately, forcing an early save from Cwm keeper James Devonald.

However he could do nothing in the 8th minute when a hesitant Cwm defence allowed ex-Cwm striker Jordan Langley to spot Devonald just off his line and he expertly lobbed the ball in from 25 yards out wide.

Ponty kept up the pressure forcing another great save from Devonald. Cwm’s first opportunity came in the 23rd min when a through ball to Hurlow saw him force a save from Ponty keeper Reeve.

Then in the 40th min Cwm played the ball out across the penalty box and as Devonald went to clear he didn’t see the advancing Ponty forward and clipped his ankle as he just took the ball away from him. Berry put the penalty away but his chipped shot was almost saved as the keeper twisted   backwards to grasp it.

The second half was a different affair with Cwm taking the game to the opposition.

A Ross Morgan free kick was well saved and then we saw the best chance of the game with Calem Rees through on the keeper but agonisingly watching his shot trickle past the post.

To add insult to injury immediately afterwards a long Ponty ball split the Cwm defence and the cross evaded the Cwm defenders allowing Josh Dorward to tap home in the 69th min for 3 nil.

Devonald was injured in the process and was replaced from the bench by outfield player Keena Hinds. Cwm kept going and with Nathan English pressing hard chances were starting to happen.

A good individual effort saw Ryan Hurlow pull one back in the 77th min and then Calem Rees with the keeper beaten  hit the post with a free kick from the edge of the box.

Rees then fired over while Hinds made a good save at the other end. Cwm kept attacking and with the game getting a little heated at the end we saw a couple of yellow cards before Ponty celebrated the win.