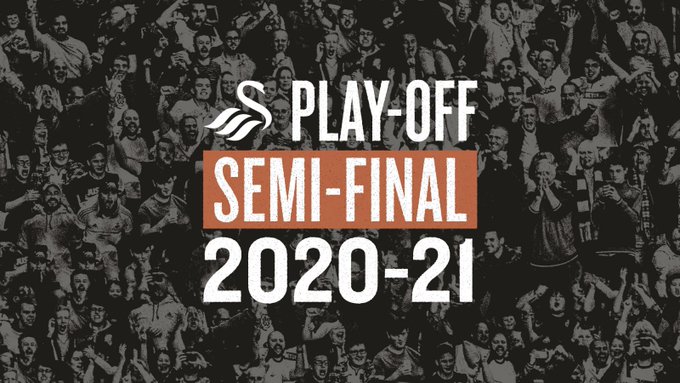 SWANSEA CITY supporters will be able to apply for a free ticket to the club’s Championship play-off semi-final against Barnsley at the Liberty Stadium on May 22, kick off at 6:30pm.

3,000 tickets are being made available and they will be allocated via a ballot system which will only be open to season ticket holders.

The club has said they want to ‘thank fans for their loyalty’.

The game is also being used as a test event for the return of fans to stadiums across the country.

Swansea City chief executive Julian Winter said they were ‘absolutely delighted to be able to welcome supporters back to the Liberty Stadium’.

He added: “While we are aware that other clubs will be charging supporters for tickets at their games, we will be offering our tickets free of charge for our play-off semi-final. This is to thank all of those 2020-21 season ticket holders who left their monies in the club and supported us through the difficult times.

“It is imperative that we show all stakeholders and governing bodies that we are in full control of this test event and we call on supporters who are successful in obtaining tickets that they follow all the instructions.

“This is a momentous occasion for everyone associated with the club and I would like to thank everyone involved for getting it across the line at such short notice.

“We cannot wait to be reunited with our supporters for the first time since March 2020 and we hope that those supporters who are successful in the ballot have an enjoyable experience, because we’ve missed you all immensely.”

The club has been in dialogue with Welsh Government, Public Health Wales (PHW), the EFL, Swansea Council, Swansea Bay University Health Board, as well as the local Safety Advisory Group (SAG) and South Wales Police.

Details of the ballot can be found on the club’s website but it will only to 2020-21 season ticket holders who left their monies in the club for this season, along with 2020-21 hospitality guests and sponsors.

The ballot is now open and will close at midnight on Friday, May 14.