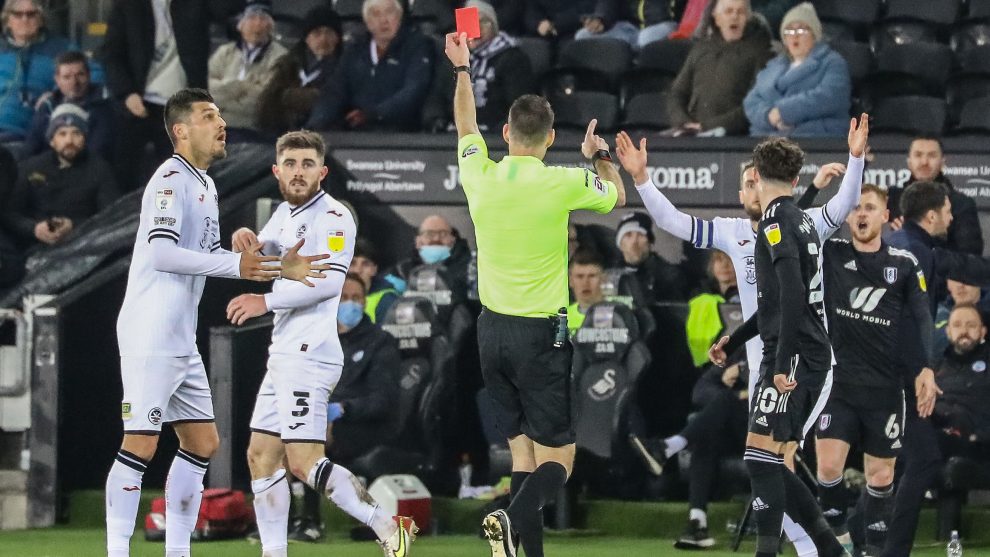 A poor first-half foul on Harry Wilson led to referee Jarred Gillett reaching for the red card in just the 42nd minute.

The Irishman went into the challenge studs-up, landing just above Wilson’s ankle.

The game was still 0-0 at the point, and boss Russell Martin exploded in fury on the touchline.

It is the second red card of Manning’s reason – and faces a four-match ban as a result.

His first red card came against Blackburn – when the Swans hosted the Blue and Whites on February 5th.

If the appeal is unsuccessful, Manning could face a 5-match ban.

Swansea head coach Russell Martin said: “In my opinion, after watching it back, it’s a really poor decision.

“I think Fulham wanted a penalty a bit before that. They were adamant in the technical area it was a penalty. They got away with much more than I did with the fourth official.

“What’s happened is the referee has followed one mistake with the penalty if he got that one wrong.

“I couldn’t believe how quickly he got the red card out, so it’s ruined the game in terms of a spectacle. It was two really good teams going right at it.”

Fulham boss Marco Silva said: “If you ask me if I thought it was a red card at the time, I have to say no.

“I didn’t see the broadcast image. In the first moment, I thought it would be yellow but when I saw Harry’s leg I started to think in a different way.

“Maybe it’s not a red card but 15 minutes earlier it’s a clear penalty. He made a mistake there as well. It’s part of the game.”