Home » Ten-man Nomads come from behind to beat Newtown 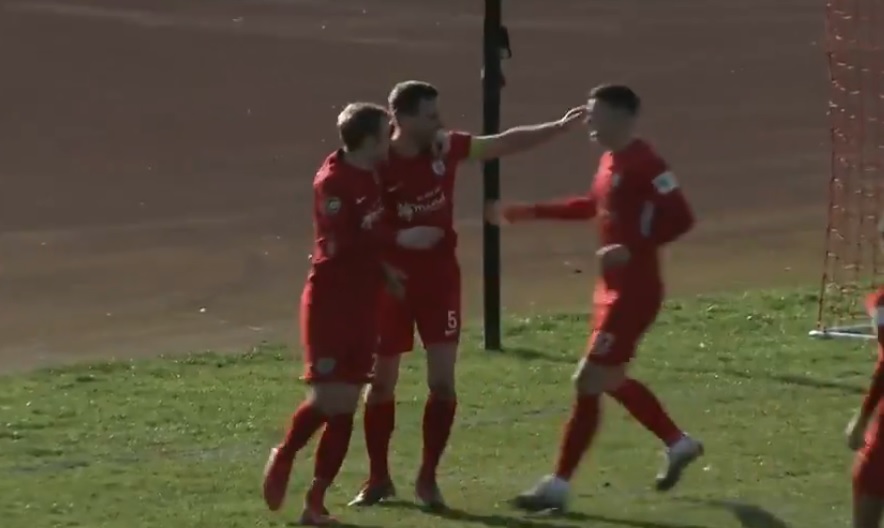 CONNAH’S QUAY NOMADS came back from 1-0 down against Newtown to run out 2-1 winners at Deeside in the JD Cymru Premier on Saturday afternoon, March 6.

Despite playing with 10 men for over 70 minutes, the reigning league Champions persevered to extend their winning run to eight consecutive games.

The game marked the resumption of elite level domestic football in Wales, with Connah’s Quay Nomads eager to continue winning ways after a run of seven consecutive victories before the December lockdown, which kept them at the forefront of the title race.

Andy Morrison named a familiar side with George Horan captaining and Callum Morris in the midfield, while also handing a start to Jamie Insall who returned from injury. John Disney was also included in the XI at the last minute, replacing Kris Owens who was injured during the warm-up.

New signings Tom Moore and Johnny Hunt were on the bench alongside Neil Danns, who had joined the club in the week following his professional career at the likes of Crystal Palace, Leicester City and Bolton Wanderers.

The game opened with a fast pace and lots of aerial challenges, as both sides made their determination to attack clear in the early stages.

Despite this, there were few major chances, with Wilde crossing into the Newtown area in the 8th only for Callum Morris to have his effort from 20 yards blocked.

Nomads began to win free kicks around 25 yards from the Newtown goal, with a 14th minute delivery from Sameron Dool being headed just out by George Horan on the byline.

However, in the 18th minute, the visitors went ahead with one of their first attempts on goal, after Alex Fletcher sent a strike in from the edge of the area.

Connah’s Quay quickly tried to respond by attacking the Newtown end, but things would go from bad to worse for them in the 24th, when Jamie Insall was shown a straight red card for a challenge on George Hughes.

But all inside the first 30 minutes, George Horan hit back to equalise at a crucial point. Dool sent in a free kick to Wilde, who stopped Newtown keeper David Jones collecting the ball which fell to Horan who made no mistake at close range in the 28th.

The final stages of the first half saw both sides push to take the lead before the interval, but they often cancelled each other out with George Horan and Shane Sutton commanding their defences well.

At half time, Andy Morrison made his only change of the game, handing a debut to Neil Danns who replaced Sameron Dool.

Danns would soon get involved, helping Nomads press the Newtown final third with surging runs from the midfield and a cross to Wilde in the area in the 57th.

Wilde got the ball in the area and crossed, but it was blocked by a Newtown defender leading to a handball shout from Nomads, which was waved away by referee Cheryl Foster.

They were instead awarded a throw in deep in the Newtown half, and this would lead to the decisive goal, as following the throw Danny Holmes crossed to Wilde, who fired a header in from inside the six-yard box on 59 minutes.

Nomads were on top going into the final 30 minutes of play, but had a significant challenge ahead of them as they defended with 10 men against a Newtown side who remained well in the game.

The task only grew bigger in the 65th minute, when Newtown introduced four substitutions at once in line with the new five-sub rule introduced for the remainder of the JD Cymru Premier season.

The visiting Robins were increasing their share of possession as the game entered its final 20 minutes, but Nomads restricted their chances on goal throughout.

Newtown did get an opportunity on 72 minutes when Jordan Evans broke through on goal, but he shot wide just as the offside flag went up against him.

Neil Danns was proving instrumental in holding play up in the Newtown half as Nomads looked to run the clock down, going on a run to win a deep throw for his new side in the 79th.

After 80 minutes, Nomads had all nine outfield players behind the ball as they continued to withstand Newtown’s pressure. With only four minutes of normal time to play, Newtown sought to launch a last chance effort to equalise late on, and won a corner kick in the 87th.

But Connah’s Quay’s disciplined defence cleared the danger, with first half goalscorer Horan again rising highest in his own area in the 90th minute to clear a dangerous aerial ball swung in for Newtown.

This proved enough to earn the comeback win, with full time confirming Nomads’ eighth league victory in a row.

They will now move onto a derby clash with Neil Gibson’s Flint Town United on Tuesday, March 9, for a 7:45pm kick off at Cae Y Castell.