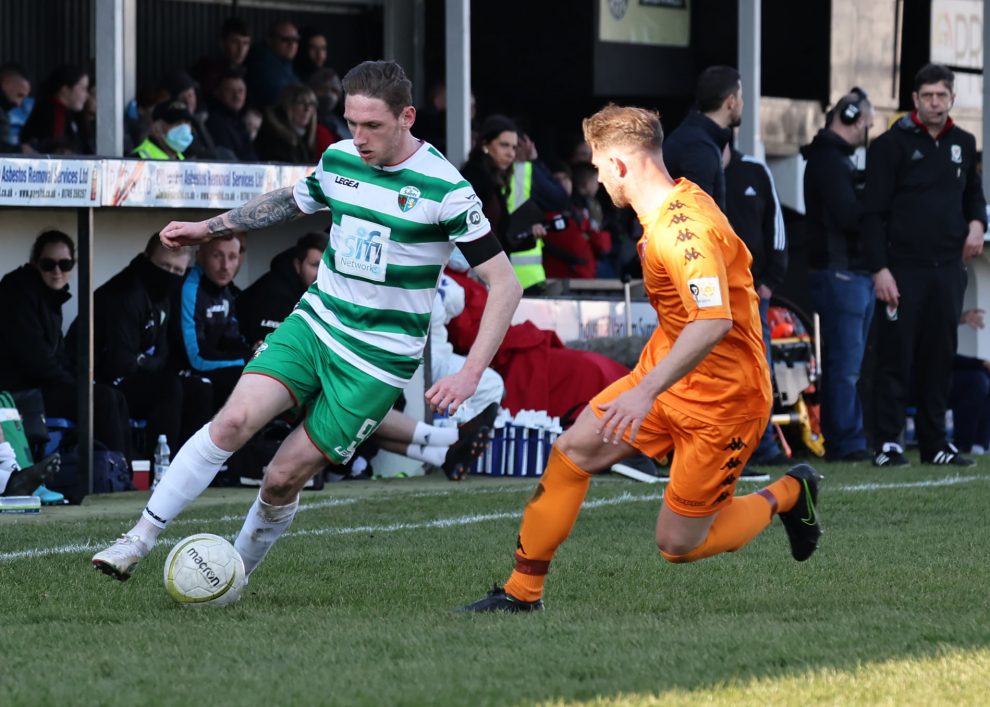 THE New Saints booked their place in the final of the JD Welsh Cup, but were made to work hard to defeat Colwyn Bay in Rhyl on Sunday (Mar 20).

In the end, Danny Davies’ 15th-minute header proved enough for Anthony Limbrick’s team who, courtesy of their 1-0 win, booked their place in April’s final.

It’ll be Penybont up next for The Saints, as they look to finish their superb season in even better fashion by lifting the double.

Limbrick’s team started brightly, and with just two minutes on the clock, Declan McManus sent a header over from close range, following some head tennis inside the Colwyn Bay penalty area.

Five minutes later, McManus was involved again, as he almost got on the end of a Keston Davies header. The Seasiders’ goalkeeper, Andrew Coughlin, made a vital interception though, taking the ball away from the feet of the Scottish striker.

It was all TNS in the early stages, and Ryan Brobbel tried his luck from distance in the 15th minute, after spotting the goalkeeper off his line. However, Coughlin did well to recover and pushed the ball wide.

But from the resulting corner, the JD Cymru Premier champions found the go-ahead goal. It was superb delivery from Brobbel, who picked out Danny Davies at the back post, where the number 22 was left with an easy finish to head home from a couple of yards out.

There was no let-up in Saints pressure following the opener, with both Keston Davies and Jordan Williams sending headers over the bar in the time that followed.

With just five minutes to go before the break though, Steve Evans’ side had a golden chance to get back into the match, but Kristian Platt couldn’t keep his header down under pressure inside the penalty area.

The game got scrappy after the break, with the pitch very much a leveler.

In the 56th minute, Brobbel dragged an effort wide from the edge of the box, which was the first real chance of note for either side in the second period.

Just a minute later, some good work from Colwyn Bay saw them work the ball into The Saints’ box, but much to the annoyance of their supporters behind the goal, play was brought back for a handball in the build-up.

Chances continued to follow at both ends, and in the 63rd minute, Jordan Williams thought he’d doubled his side’s lead, only to look up and be denied by the offside flag.

Then, it was Connor Roberts’ turn to play his part, pulling off a great save to deny James Kirby, who’d received the ball on the edge of the six-yard box.

With time running out, and The Saints’ defence doing its job, the Seagulls knew they’d got nothing to lose.

In stoppage time, former TNS assistant manager, Steve Evans, introduced himself off the bench, playing up front in the hopes of using his height advantage to help snatch an equaliser.

He was involved in the closing stages, getting his head to the ball on a number of occasions, but despite their best efforts, his side were unable to force the penalty shootout.

As a result, The New Saints’ quest for the double continues, and Anthony Limbrick’s side will now face Penybont in the JD Welsh Cup final on April 30th.