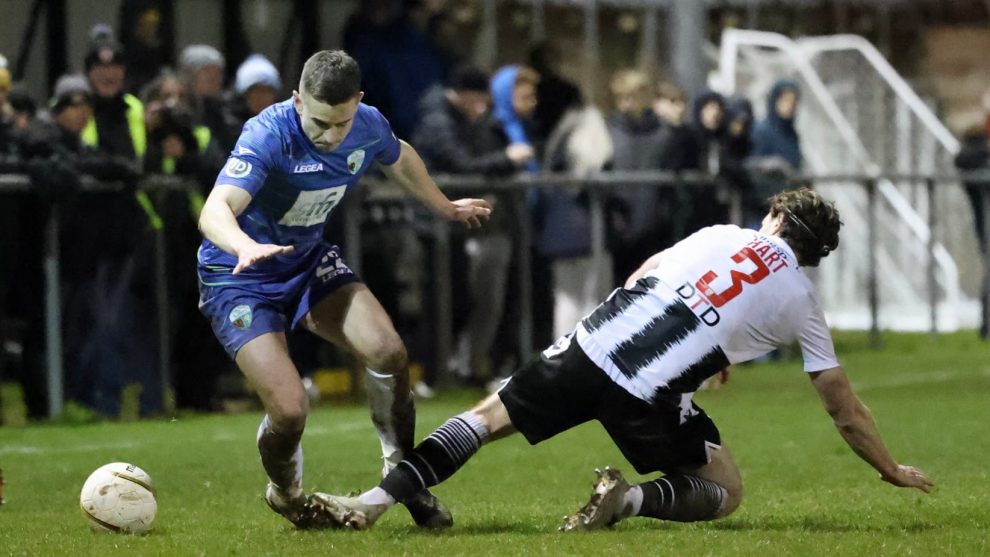 THE New Saints were made to work incredibly hard, but picked up another important three points at the Essity Stadium on Friday night (Mar 4).

After Flint Town United had dominated throughout the first-half, Anthony Limbrick’s team took the lead just seconds into the second period.

Despite the setback of a Flint equaliser, Danny Davies restored his side’s lead just before the hour mark – a winning goal that took his side a step closer to a record 14th league title.

With just four minutes on the clock, Paul Harrison needed to be alert as he pulled off a superb save to deny Jake Phillips. The Flint man’s effort was destined for the top corner, but superb work from the Saints’ keeper made sure that wasn’t the case.

Four minutes later, Limbrick’s men were under pressure again, and a header from Ben Nash almost snuck into the far corner.

Down the other end, Ryan Brobbel called home goalkeeper, Jonathan Rushton, into action for the first time with an edge-of-the-box effort in the 13th minute.

After surviving a lot of early Flint pressure, the visitors began to grow into the game, and Adrian Cieslewicz watched a chance of his own go wide 10 minutes later.

Neil Gibson’s side continued to cause problems though, and Harrison pulled off another fantastic save in the 33rd minute, tipping a Sam Hart header onto the crossbar from close range.

From the resulting corner, Callum Bratley dragged an effort wide, as The Saints continued to ride their luck until half-time.

Just 40 seconds after the break though, the match turned on its head, as Jordan Williams opened the scoring against the run of play.

Spotting the goalkeeper out of position, the number 17 sent a curling effort into the far corner from the edge of the box – the first chance of note his side had enjoyed all evening.

The lead didn’t last long though, as the hosts grabbed an equaliser just six minutes later.

A long throw-in from Sam Phillips caused problems inside the TNS penalty area, and Callum Bratley was on hand to volley a powerful effort past Harrison from the edge of the six-yard box.

The Saints weren’t disheartened though and continued to work chances.

With 58 minutes played, Flint goalkeeper, Jon Rushton, pulled off a great save to deny a close-range Louis Robles header that was destined for goal.

From the resulting corner, Limbrick’s team got their noses back in front, and it was Danny Davies who scored his second goal in as many games.

Connecting with Chris Marriott’s cross at the back post, the number 22 showed great technique to squeeze a header past the goalkeeper from a tight angle, sparking celebrations amongst his teammates.

Ex-TNS man, Mike Wilde, had a chance to grab a second equaliser for his side in the 69th minute, but after connecting with Phillips’ corner, his header was high of the target.

Chances continued to flow for both sides, and Ryan Brobbel sent a free-kick onto the roof of the net in the 73rd minute.

Despite throwing everything at the game in the closing stages, the Silkmen were unable to find a way back into the game, meaning it was The New Saints who took all three points back to Park Hall.

Anthony Limbrick’s side are now just two wins away from a record 14th league title and can take another big step towards that goal at Park Hall against Bala Town on Tuesday (Mar 8).