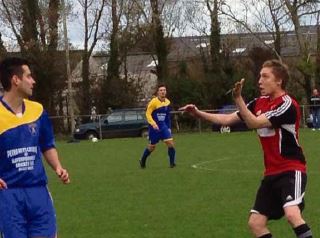 RYAN Howells scored four goals in this easy victory for the Phoenix boys. It took half an hour for Goodwick to break the deadlock, when a pinpoint cross from James Evans was well met by skipper Wayne O’Sullivan to head home from half a yard out. The second followed within a minute, James Evans with a killer through ball, and Rhys Dalling made no mistake from the edge of the box. Aled Rees supplied the third with a cracking 30-yard cross field pass in to the path of Ryan Howells who stroked the ball past the oncoming keeper. The second half was one way traffic. Ryan Howells added a fourth with another cool finish, and completed his hat trick with a powerful header from Darren Devonald’s inch perfect free kick. He also grabbed a fourth with another trademark far post finish. Aled Rees scored the goal of the day with cracking run down the right, and he had the confidence to drill it in to the top corner from an acute angle. Wayne O’Sullivan got the last goal, a Devonald shot from the edge of the box was well saved, and O’Sullivan shanked it home from two yards out.