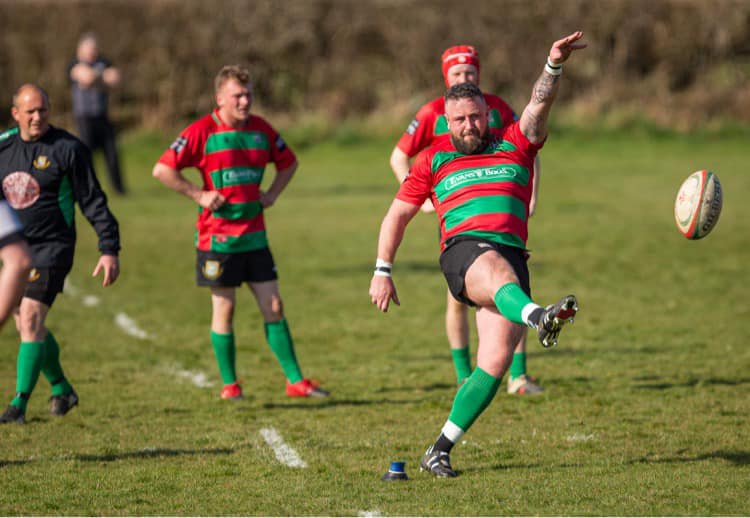 PEMBROKE DOCK QUINS travelled to OJ Park to face Llanybydder on Saturday (Mar 26) with confidence after coming out on top in their last two outings, despite being without four of their main back Division.

The Quins kicked off with the wind seemingly behind them, and they were soon to realise the effect it had as they were pinned back into their own half on one of the smaller pitches in the League.

Experienced No8 Thomas Wilson soon made the Quins pay with three well struck penalties in the opening 15 minutes.

The Quins soon hit back with a superb try from Sam (Rasher) James, racing over in the corner after good work from his Co Centre Gethin Bradney and Full Back Thomas Wheeler to pull the score back to 9-5.

It was clear at this stage that the Quins Backs had the beating of their opposite numbers, another two penalties by Thomas Wilson sent the home side in 18-5 up at the break.

The Quins defence stood up their more experienced opponents admirably and kept their line intact througout the half.

Recently the Quins have started the second half forcefully, and they really needed the next score, but sadly for them it did not come, indeed it was right Wing Ross Holder who touched down as the Quins tried to force the game, Thomas Wilson converted to his side 25-5 to the good.

To make matters worse the wind seemed to shift, and the home side added two more unconverted tries from Thomas Wilson and Left Wing Carwyn Blayney, who touched down with the last move of the match.

The effort and spirit from the Quins can’t be faulted, with Martin Cully in particularly playing out of position at hooker battling on despite an early ankle injury. Thomas Wheeler at Full Back despite his young age and slight stature was once again outstanding,and Gethin Bradney at Centre looked dangerous every time he had the ball.

The win for Llanybydder though moves them up to ninth place in League 3 West A.

The Quins are next in action on Saturday, April 2, as they make another long trip to take on Aberaeron.