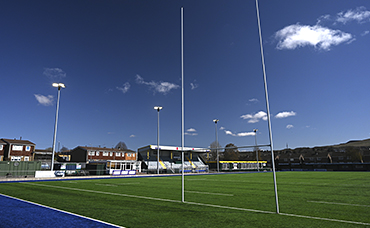 MERTHYR climbed up to third place in the Indigo Premiership table on Saturday (Mar 12) as they beat Llanelli 46-22.

Merthyr started the game well and there was just a minute on the clock when they got the first points of the game.

Alex Webber touched down for an unconverted try and soon after Ben Jones landed a penalty to give the hosts an early 8-0 lead.

They weren’t done their either as Calum Bradbury went over to score Merthyr’s second try with just 11 minutes gone.

Llanelli hit back though with an unconverted try on 15 minutes to reduce the score to 13-5.

However, just three minutes later the home side crossed again with Paddy McBride touching down before Jones added the extras.

Llanelli hit back on the half hour mark with another unconverted try to make the score 20-10.

Shortly before the break Merthyr were reduced to 14 men when Chris Phillips was shown a yellow card.

Llanelli were unable to make the man advantage count at the start of the second half and Merthyr soon had their bonus point try.

Arron Pinches scored the try and Jones then added the extras to make it 27-10 to the home side.

Llanelli hit back again with another unconverted try but just seven minutes later the home side scored their fifth try of the game.

Ashley Norton touched down and Jones again added the extras to make the score 34-15.

Both teams battled well and with seven minutes to go Merthyr were celebrating again Rhys Williams scored an unconverted try.

With time almost up Merthyr scored their seventh try of the game courtesy of Jones and this time it was Gareth Thompson who added the extras.

There was still time for one more attack and it was the visitors who had the last laugh.

Llanelli’s Amir Jawa Walji touched down and the conversion was added to make it 46-22.

That at least gave the visitors a bonus point and they now sit third from bottom in the table.

Llanelli are next in action on Friday, March 18, when they travel to Aberavon, kick off 7:15pm,

Merthyr’s next game is scheduled for March 31 when they host Carmarthen Quins.