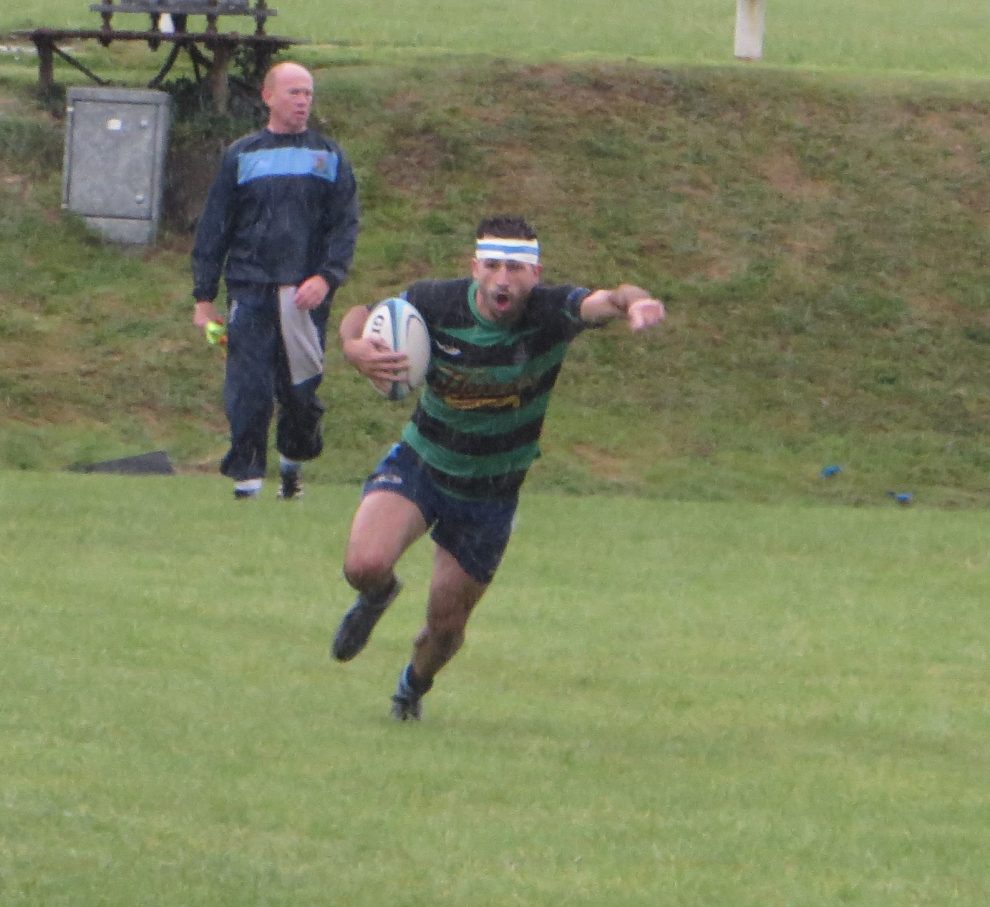 IN the first half of the game against visitors Ystrad Rhondda, Narberth were under pressure in the first 20 minutes with Ystrad threatening to break through at any moment. Plucky defence held them out.

Eventually a penalty after 16 minutes, taken by Full back Nick Gale, notched up 3 points for Narberth.

Narberth played in their green/black striped shirts because the visitors wore the blue/black stripes normally worn by Narberth.

At this stage the rain started to arrive which got stronger as time went on making the ball a bit slippery in the windy conditions.

At 18 minutes into the game Ystrad replied with their own kicked penalty but it was wide of the posts.

Lewis Gibby the OTTERS No.9 went off for head wound at 22 minutes and young George McDonald came on to replace him but Gibby came back on bandaged up after 10 minutes on the side-lines.

30 minutes in Ystrad scored a penalty from the right hand side to make it 3- 3.

Two minutes later, another penalty to Narberth was taken by Nick Gale from left-hand side, followed at 37 minutes with another penalty kick from left hand side just inside the half way line. 9-3 was the score at the end of the first half.

In the second-half at 48 minutes Narberth were attacking strongly but gained no penetration. Ten minutes later new-signing Ewan Badham came on to replace Rhys Williams at No.8.

Finally at the 61 minutes point, a break out from Loose play in the Ystrad half of 10 metres out on the right side Lewis Gibby got through and scored under the posts with a conversion to follow which was Successful score 16-3.

Narberth made a number of additional substitutions and in the closing minutes of the game replacement hooker Kyle Hamer was yellow carded for some infringement in the defensive ruck just 5 metres out from Narberth’s try line. So, the last minutes of the match Narberth played with only 14 men.

Sadly, with only dying seconds left in the game Ewan Badham breaking out from the 5m defensive line suffered a suspected ankle injury and his left leg had to be splinted and he was then taken off to hospital.

The backs coach Deiniol Evans was asked to sum up his view of this first Championship game in the new season.

“it’s always a very difficult game against Ystrad Rhondda. Twice before we have beaten them but twice they’ve beaten us on their home ground. It was always going to be a tight game, and I was difficult to control the ball in the conditions of strong wind and rain”.

He added: “There were loads of turnovers which means we couldn’t quite get into the flow we wanted for a possession game and multiple phases”.

The coach felt that the Narberth defence was the deciding factor in the outcome of the game.

He commented that: “ there’s a few development boys who have played a part of the last couple of weeks so especially seeing youngsters playing again today it was really good to see those coming through and hopefully give them more opportunities as the season progresses”.

Man of the match was given, by main match sponsor Hywel Griffiths, to flanker No.7 Caine Rees-Jones. Well deserved for his play around the rucks.