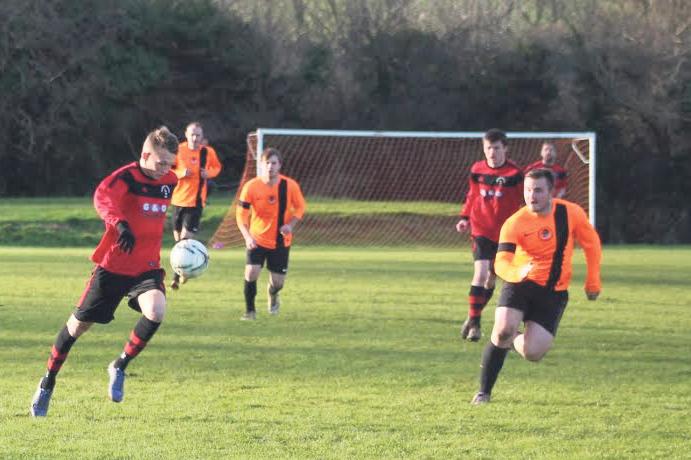 PENNAR ROBINS advanced to the quarter finals of the Senior Cup with a resounding 5-0 victory over Johnston on Saturday (Dec 13). Despite the cold conditions, The Robins made a flying start to the match and could have gone ahead in the third minute, but Phil Thompson’s shot on the turn was well tipped over the bar by keeper Martin John. John looked nervous in goal and a number of kicks went straight to Pennar players, and the second of which was sent back towards goal by Jimmy Russell, but the ball bounced over the keeper and over the net.

Johnston’s Ashley Shadow then tried his luck from long range, but his effort was brilliantly turned over by Robins keeper Stuart James. With thirty minutes gone, The Robins took the lead when Richard Hughes powered home a header from Ben Steele’s corner. The Tigers looked to get back into the game shortly before half time, but after good play by Steven Mills down the left, Liam Boswell’s shot was blocked well. After a tight first half it looked as if it would be much of the same in the second, but the game was over within just 13 second half minutes. Six minutes into the half Sam Southcott was played through, and his effort rolled into the net despite a desperate lunge from Johnston’s Chris Phillips. Another six minutes passed before the Robins added their third.

Ben Steele played the ball to Phil Thompson but after his first shot rebounded back off the post he put the ball in at the second attempt. Four minutes later they had a fourth. Johnston’s defender took the ball down from a corner but he dwelt on it too long which allowed Phil Thompson to take the ball off him and shoot high into the net. With 66 minutes on the clock The Robins had a fifth and they saved the best till last. Phil Thompson completed his hat-trick when he robbed the ball and his speculative effort from 40 yards out flew over the keeper and into the net. Johnston did not give up and with twelve minutes to go Ross Wellows played in Luke Hayward but his shot was well saved by The Robins’ keeper.

Phil Thompson could have had another goal soon after but his shot again rebounded off the post but this time into the hands of the Johnston keeper. The Robins could have had more goals, but they would have to settle for five and they now advance to the quarter finals of the cup. The draw for the last 8 has been made and the Robins will be at home against Angle after they beat Clarbeston Road 4-3.