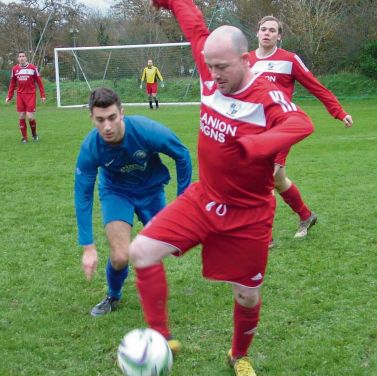 NARBERTH gained sweet revenge with this victory over Monkton Swifts in a pulsating game at Jesse Road. The Swifts are the only team to beat the Bluebirds this season with a 3-0 win at Monkton Lane. But despite trailing twice, the league leaders dug in and showed a lot of character for an excellent win.

Narberth took the lead in the 12 minute when a Kyle Quartermaine free kick found the head of Adie Jones for a great start. The scores were level three minutes later when Narberth failed to clear their lines in the penalty area and Dan Scourfield pounced on a loose ball to fire home.

It was non-stop action with some hefty tackles going in resulting in a few names going into the referee’s book. Two minutes before the break and the Swifts took the lead when a free kick found Ben Adams unmarked in the box and he volleyed home. The Bluebirds drew level 10 minutes after the break when a rash challenge by Lee Gilpin brought down Narberth player/manager Matthew Price in the box and Price made no mistake from the spot. But on the hour mark the Swifts took the lead again when a free kick on the left found Wayne Brunton who headed home a beauty.Narberth were not to be denied and came back again when a Dan Scourfield midfield ball put Price clean through and he placed the ball past the despairing hands of keeper Lance Crease. Swifts defender Shaun Jones was sent off for a second bookable offence, and five minutes before the final whistle Ben Adams took the ball into the penalty area and blasted home from 12 yards to give Narberth the lead.

But the scoring was not over yet. With the Swifts pushing everyone forward, they were caught on the break with two minutes to go with Price again converting from 18 yards out. Unbelievably a minute later the Swifts clawed one back when Wayne Brunton got on the end of a slick midfield move. For the final minutes the Swifts threw everyone forward but just could not find another goal to end a very exciting game of football.