Home » Tigers give Sports a mauling 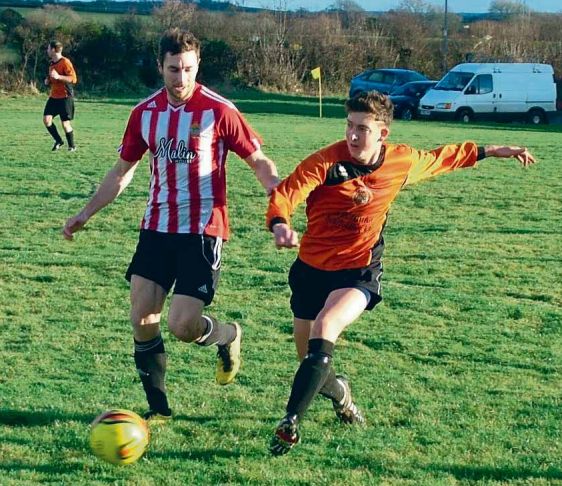 JOHNSTON inflicted a nine goal drubbing of Saundersfoot Sports on Saturday, outplaying their opponents in every department of the game.

The Saundersfoot team were depleted with suspensions and injuries, but even at full strength they would have found the Tigers in uncompromising mood.

The Tigers were a goal up after only three minutes when Steven Dockerty surged into the Sports penalty area and unleashed an unstoppable shot.

The next goal came in the 11th minute when Nicky Woodrow burst down the left and provided a pin-point pass to Joe John who converted on the volley.

The Sports did have a couple of chances mid way through the half when player/manager Sam Colman fired just wide of the post and Chris Millward also went close.

But just before half time Steve Mills let go a 30-yard screamer which gave Sports keeper Ben Evans no chance.

Johnston’s Ben Skudder sustained a nasty knee injury before the half time whistle which could cause him to be out for the rest of the season and was taken by ambulance to hospital. Herald Sport wishes him a speedy recovery.

There was no let up for the Sports defence, and a minute after half time Joe John went on a run down the right and crossed to Woodrow who headed a looping effort past the stranded keeper Evans.

And on the hour mark it was 6-0 to the Tigers when Andrew John picked out Woodrow in the penalty area and the prolific striker made no mistake.

A minute later and Dockerty made it seven-nil when he drilled a low shot into the net from the edge of the penalty area.

Johnston piled on the pressure in the closing stages with Woodrow netting two more goals to complete a miserable day for the Sports.

The new Johnston management team of Chris Ormond and Steve Heyward will be delighted with the response from the team after recent upheavals.