Home » Wales denied at the death in heart-breaking defeat 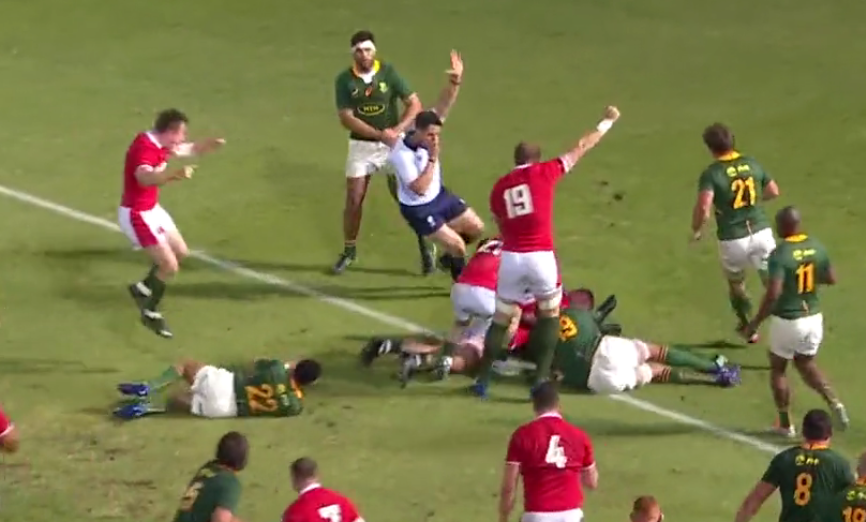 WALES came so close to claiming an historic result in South Africa but were left heartbroken by a last-gasp penalty from Damian Willemse.

Wayne Pivac’s men gave a courageous performance which pushed the world champions to the limit in their own back yard. This was a hugely encouraging performance which will have given Wales huge confidence going into next weekend’s second Test in Bloemfontein.

Wales looked unrecognisable from the side which lost to Italy in the Six Nations as they took the game to South Africa from the word go, hustling their hosts into uncharacteristic errors.

It was Wales who drew first blood with a sensational try. Will Rowlands stole South Africa’s lineout ball which allowed Gareth Thomas to charge forward. The Ospreys prop off-loaded to Rowlands with the ball moved through the hands of Kieran Hardy, Dan Biggar, George North and Liam Williams with Gloucester wing Louis Rees-Zammit showing his pace to race in for the opening try.

Biggar extended their lead with a speculative long-range drop goal which needed clearance from the television match official.

But South Africa began to flex their muscles with their scrum and driving lineout forcing Wales to concede penalties which gave Elton Jantjies the opportunity to claim their first points from the kicking tee.

Biggar nudged Wales further ahead with a penalty from the half-way line, but his opposite number Jantjies wasn’t having much luck. The 31-year-old was given the reigns to the Springbok number 10 jersey with Handre Pollard not selected. Jantjies missed a penalty from right in front of the posts and kicked another out on the full.

South Africa began to gain the upper hand with their heavy ball carriers putting severe pressure on Wales, but the visitors’ defence remained firm. Wales were able to relieve pressure when debutant openside Tommy Reffell, fresh from winning the Gallagher Premiership with Leicester Tigers, earning a penalty at the breakdown.

From the resulting lineout Ryan Elias threw long to Nick Tompkins in midfield. The Saracens centre collided with Jantjies with the ball spilling backwards only for Rees-Zammit to hack on before regathering to score. Biggar added the extras.

Damian Willemse released Faf de Klerk who raced towards the line, but a magnificent last-gasp tackle from Biggar denied the former Sale Sharks scrum-half. But Biggar paid a hefty price for his bravery; getting sent to the sin bin for not rolling away. A South African try looked inevitable as they set up a menacing driving lineout just five metres out from the Wales line, but somehow Pivac’s side survived to turn around with an 18-3 lead.

South Africa threw the kitchen sink at Wales in the opening stages of the second half, and finally broke the Wales defence with Bongi Mbonambi powering his way over from short-range after a powerful driving lineout. Willemse’s conversion was successful, and South Africa had the bit firmly lodged between their teeth as Lood de Jager burst up field.

The giant lock made 40 metres, and the momentum was back with the Springboks who had also decided to bring the infamous front row ‘bomb squad’ of Steven Kitshoff, Malcolm Marx, and Vincent Koch off the bench.

Wales were dealt a significant blow when Tomas Francis was stretchered off the field. South Africa were beginning to make their physicality tell as replacement hooker Malcolm Marx smashed his way over the line for their second try.

Wales showed tremendous character to grind their way back into the game with two penalties from Biggar making it a two score game again.

South Africa set up a grandstand finish when Willemse beat Wales’ rush defence which resulted in Cheslin Kolbe touching down at the far right-hand corner. A tremendous touchline conversion from Willemse brought the Springboks back within two points of Wales.

As if things couldn’t get tougher for Wales, Alun Wyn Jones was sent to the sin bin for an offence in the lead up to the try.

Willemse played havoc with the Wales defence as he ran straight through the men in red – only being denied by a tremendous tackle from Rees-Zammit who was also sent to the sin bin for kicking the ball. South Africa went to the corner and were awarded a penalty try with Rhys Carre sent to the sin bin.

Wales were down to 12 men but remarkably levelled the scores when Dewi Lake used his strength to touch down off the back of a driving lineout. Biggar missed the conversion.

Wales would have been happy with a draw but up stepped Willemse to break Welsh hearts with the last kick of the match at the death.