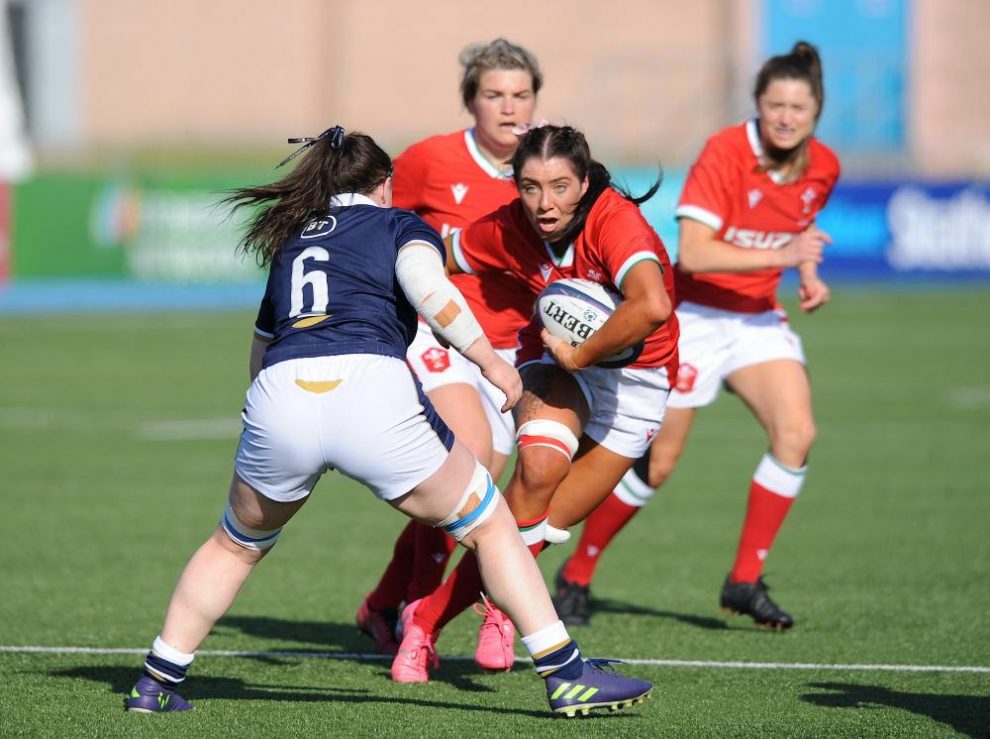 WALES WOMEN’s vice-captain against Scotland Georgia Evans is pleased with the improvement the side showed in their final Women’s Six Nations game and feels it’s time to reset and look forward.

She said: “The feeling in the camp is a positive one after Saturday’s performance. We still started off a bit rusty but the way we finished the game showed the extent of our heart and desire to do the jersey proud.

“Taking the positives from the game, we showed glimpses of what we can do, we just need to be more consistent so that we can perform for the full 80 and get those wings on the ball earlier.

“Overall the girls can be happy. I think we all dug deep with our performance against Scotland, everybody stepped up and did their roles well. The set-piece obviously let us down. We’ve worked on it a lot, but something didn’t click on that front. It’s something we’ll learn from and there’s always more to do.”

Evans believes the players also need to set some individual goals ahead of next year’s Rugby World Cup.

“The World Cup is the pinnacle of everyone’s rugby career, we all really want to get there. I think now it’s about re-setting. It’s been an emotional campaign, it’s been a tough one but actually we can all go away from this knowing that we put a performance in to be proud of at the end. I think we will all go back to our clubs now, reset and aim to finish the rugby season on a high.

“Individually we’ve got to look at ourselves and really push forward to make sure that when we come back into camp we don’t start from Ground Zero – we need to start from where we left off on the weekend and we build on the performance rather than going back to the very beginning. There’s lots to look forward to, it will be exciting to see what happens next.”

Head coach Warren Abrahams was proud of the fight and flair shown by his side as they signed off the 2021 Women’s Six Nations with a battling defeat in Scotland.

Despite being beaten 27-20 at Scotstoun, Wales fought until the final whistle and scored a pair of well-worked tries from Lisa Neumann and Caitlin Lewis to finish their campaign on a positive note. And head coach Abrahams reckons their is cause for optimism after watching his side deliver a much improved performance.

“I’m really proud of them, we asked for a performance and that was the key thing today,” he said.

“We saw some really good stuff and some real fight. That finish at the end showed that considering where we were in the game and I’m really pleased with the way we showed how we want to play.

“We went through 19 phases at the end there so there are some really great things we can take away from this game. If we want to compete at this level, we have to sort the set-piece out and we’ve learned some tough lessons there today. But it was a great completive fixture as we expected it to be.”

Abrahams and his staff now have time to dissect the Women’s Six Nations campaign before looking ahead at next year’s Rugby World Cup in New Zealand.

“It was a tough start to the Six Nations, but the biggest thing for me and the coaching team is that we’ve learned some incredible lessons,” he added.

“We’ve got some confirmation of where we are as a group and what we need to do. If we want to compete at this level we just have to iron out the details behind the scene. We can take a lot of positives from this performance to continue to build.