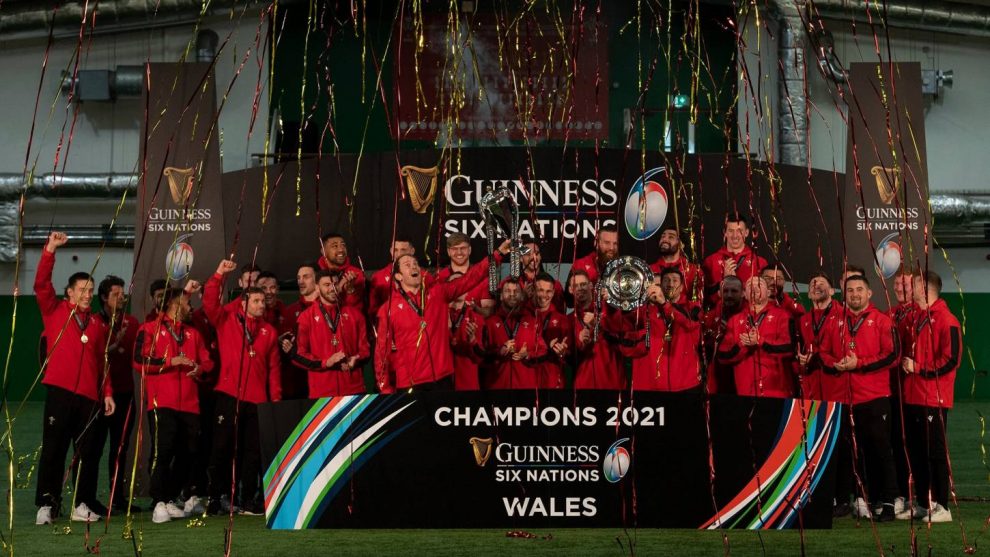 WAYNE PIVAC’s side narrowly lost out on a Grand Slam when they were beaten 32-30 by Les Bleus at the Stade de France.

It meant Wales had a nervous wait to see if they would win the title.

France needed to beat Scotland by 21 points or more and score four tries in the process, but in the end, they managed neither which meant Wales came out on top.

Pivac and his players – who sealed a Triple Crown earlier in the tournament – received the Six Nations trophy at their Vale of Glamorgan training base on Saturday.

Wales can be seen receiving the Six Nations Trophy HERE

Pivac said: “It was a hell of a game wasn’t it? It reminded me of last week with the cards, people coming and going, penalties and missed opportunities. What a tournament it’s been.

“From a Welsh point of view, we’re very happy to have won the Championship. It’s a shame we couldn’t have done it as a group last week.

“We don’t want to talk too much about last week, but we felt we did quite a bit in that game to have won it. As a game, it wasn’t to be. It doesn’t take away from all the hard work that was done.

“We’ve come out on top of the points table and have won the tournament.”

Scotland sealed a dramatic win over France thanks to an 85th minute try from Duhan van der Merwe.

Pivac added: “Some great rugby has been played in this tournament – it’s exciting times for all concerned. We’re very happy with how things are going at the moment in our camp.

“We built throughout the competition. We’ve just watched Scotland and they did an amazing job and took some big scalps. It’s been a great period for Gregor [Townsend] since the World Cup – I’d like to congratulate him on that performance which has helped us win the Championship.”

“It was an emotional rollercoaster the last seven days because we put in by far our best performance against the French and I thought we had done enough midway through the second half to have won that game – but it wasn’t to be.

“Then we didn’t know if it was good enough to win the Championship, waiting seven days for that match and then go through that match – which looking back was a really exciting match – with so many moments that kept us on our toes.

“We aren’t the finished product; we will keep on improving and fine-tuning. We’ll draw a line in the sand now and see how we are, we’re measuring up quite nicely.

It may have been Pivac’s first taste of Six Nations glory, but he had inherited a squad packed full of Championship winning experience.

Chief amongst the serial winners in the Wales squad is captain Alun Wyn Jones, who led Wales through fierce battles and controversy to emerge victorious.

And Pivac believes his captain’s unrelenting approach to day-to-day life is the secret to his success and longevity.

“Alun Wyn is going to go down as one of the greatest players of all time, and rightly so,” he added. “I suspected he would go well, but he even surpassed what I thought he would deliver.

“And it’s not just what you see on a given day in a Test match. It’s what he does in every minute of every training session, he leads from the front physically, it’s just incredible. Where he gets the motivation from, it’s again the pride in the jersey and playing for his country.

“For a small nation, people will say we punch above our weight, but there’s a lot of history there and a lot of motivated people, and he’s our leader on and off the field, does a fantastic job along with other leaders in this team.”