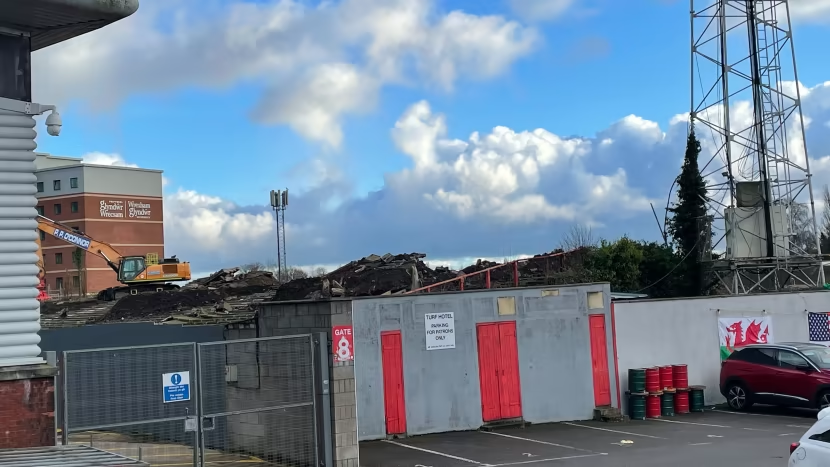 At a planning committee meeting held by Wrexham Council in November 2022, the new 5,500 capacity stand was unanimously approved.

Due to its dilapidated condition, the old stand has been labelled a “eyesore” for quite some time.

McElhenney, a co-owner, took a picture of the demolition site and posted it online.

The ‘It’s Always Sunny in Philadelphia’ star tweeted: “Goodbye old girl. You will not be forgotten. Hopefully that’s promotion at the end of your rainbow :)”.

Amongst the 150 comments, some fans were sad to see it go but many looked forward to the memories to come at The Racecourse Ground.

One comment explained: “It’s what progress looks like. The Kop will be forever remembered by those who stood on it and had many wonderful memories from there.

“The new kop will create many lasting memories for those who are lucky enough to witness games from on there again.”

Wayne Jones, landlord of the Turf Hotel in the city said he felt a “tinge of sadness” at the demolition but “overall, excitement for the future”.

“It will give more people opportunities to come to the game because we sell out now – more bums on seats more people spending money on the local economy”, he added.

Another said: “The outpouring of emotion on here has been crazy, when you think about it its just steel and cement. But its memories made there which make it such a special place, the new Kop will do it justice and a whole new generation of fans can make their memories, thanks to you Rob.”

Wrexham are currently placed second in the National League with the new Kop hoping to welcome fans by the beginning of the 2024/25 season.