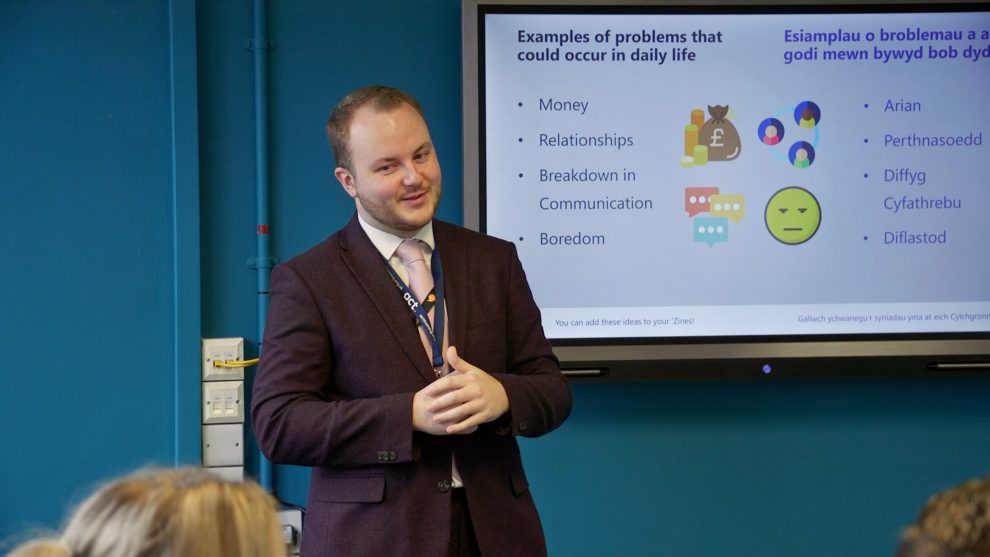 APPRENTICE Kameron Harrhy is transferring his knowledge and experience of being a Welsh medium primary and high school teacher for five years into his new role with work-based learning provider ACT in Cardiff.

Kameron, 27, of Blackwood, is working on Welsh-medium curriculum development within ACT to support the company’s practitioners and learners who are at school or working towards traineeships and apprenticeships.

He collaborates with the teams led by Vicky Galloni, ACT’s curriculum development manager and Non Wilshaw, Welsh development manager, to develop curricula and learning resources, including using of film, to engage with learners who are given the opportunity to learn bilingually.

He also ensures that the Welsh dimension and culture are embedded in all existing and newly created learning resources across the company.

To better understand the learner’s experience, Kameron is working towards an a Level 3 Apprenticeship in Learning and Development through City & Guilds, delivered by ACT and an assessor’s award.

Due to his passion for apprenticeships and the Welsh language, he has also been appointed an Apprenticeship Ambassador by Coleg Cymraeg Cenedlaethol and the National Training Federation of Wales (NTfW).

“My specialism is in Welsh language development using a dual language approach,” explained Kameron, who obtained a joint degree in Welsh and Film and TV at Aberystwyth University before beginning his teaching career.

“It’s really important that I complete an apprenticeship to get a feel for the learner’s experience. It does make my focus become more aspirational in the department.”

Proud to be appointed an Apprenticeship Ambassador, he said his aim is to raise awareness of the apprenticeship opportunities available to learners.

“I don’t think I would have suited my current role had I not been from an educational background,” he added. “Seeing the opportunities that are available in work-based learning has really opened my eyes.

“To help the Welsh Government achieve its target of one million Welsh speakers by 2050, it’s extremely important that learners are given the chance to learn through the language of their choice. We should be proud to promote Welsh as flourishing language that is used in the workplace.”

Vicky Galloni said Kameron has made a very positive impact at ACT. “He’s the driving force in ensuring that we are fully bilingual and promote and embed the Welsh dimension and culture in all our resources and everything we do.

“ACT is the first training organisation in Wales to have developed for our apprentices a fully bilingual onboarding process and Kameron has been at the front of that.”

To find out more about apprenticeship opportunities go to Careers Wales https://careerswales.gov.wales/apprenticeships or telephone 0800 028 4844.

Statement from the Welsh Government on flooding in various parts of Wales
Cutting back on heating this winter could push up insurance costs, says expert