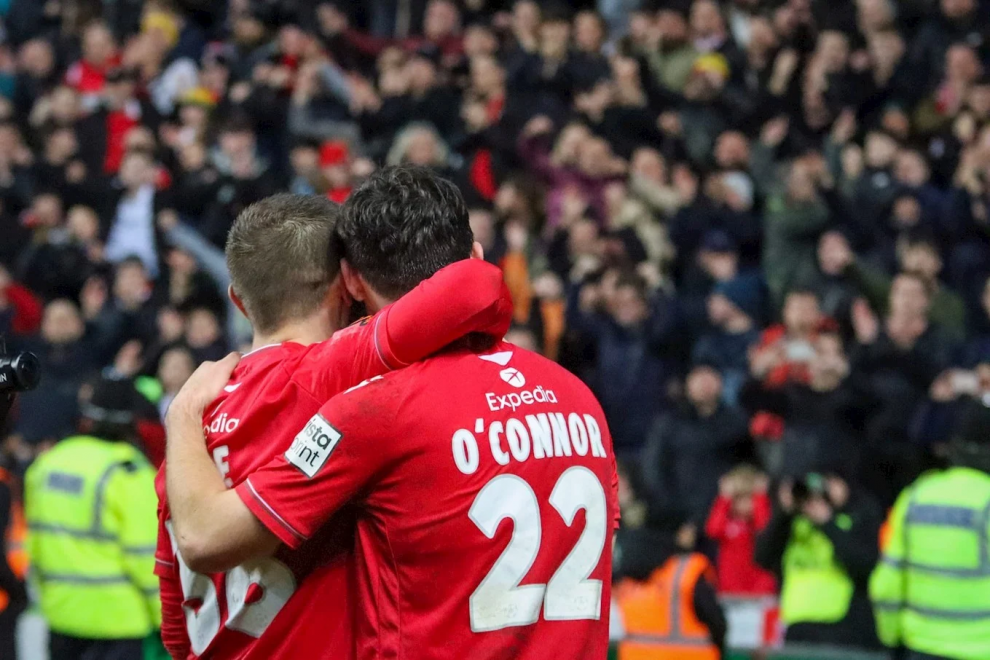 Another FA Cup upset was brought on by WREXHAM.

In a thrilling third-round match, Phil Parkinson’s team never trailed, going up 2-0 before the Sky Blues pulled one back.

The Reds made it 4-1 in the second half after the home team was reduced to 10 men, but Wrexham scored once more to lead 3-1 at the interval.

Despite having less players, Coventry scored twice in stoppage time to put pressure on Wrexham, but the equaliser did not materialise, and Wrexham held on to win to guarantee their spot in Sunday’s fourth round draw.

Parkinson made four adjustments to the lineup from the 2-1 victory at Solihull Moors on Monday.

Reece Hall-Johnson was chosen over Anthony Forde for the right wing-back position, and Callum McFadzean took the place of injured Jacob Mendy on the left.

Aaron Hayden, who had a knock and wasn’t risked, was replaced at centre back by Max Cleworth, and Sam Dalby and Paul Mullin were named in attack, with Ollie Palmer moving to the bench as a replacement.

Coventry, whose manager Mark Robins had also made changes, had the first opportunity in the eighth minute despite Wrexham’s promising start.

Michael Rose snuck in at the far post to receive a dangerous free kick from Kasey Palmer, but the defender shot over from close range.

However, after eight minutes, Wrexham seized the lead.

Hall-Johnson turned Tom O’Connor’s diagonal into a chance for Luke Young to send in a cross, and Dalby headed the ball downward into the goal.

Palmer’s 25-yard free-kick nearly brought Coventry back into the game when it hit the post, but Wrexham made it even better by going up 2-0 after 18 minutes.

Lee was provided with a pass by McFadzean, and the playmaker curled a shot past Simon Moore from outside the box.

After 36 minutes, Coventry scored a goal to get back into the game after Tom O’Connor missed the goal at the other end.

When McFadzean was found in possession, Sheaf was sent a cross into the area, and he scored.

Encouraged by the goal, Coventry launched a counterattack, and Howard stopped Waghorn, but Wrexham increased the score to 3-1 in the sixth minute of extra time.

Young threw the ball back into danger after Ben Tozer’s throw-in was only half cleared, and Tom O’Connor nodded in Dalby’s flick.

At the beginning of the second half, the Sky Blues had a few corners without doing any damage to Wrexham.

When Cleworth’s effort from Tozer’s throw-in was purposefully touched in the area by defender Jonathan Panzo in the 58th minute, the Reds went ahead 4-1.

Straight red card was given to Panzo, and Paul Mullin scored the next penalty.

Palmer hit the post for Coventry, and Mullin had another attempt saved on the line by Moore.

The Sky Blues, though, scored a goal to tie the score in the 69th minute.

Viktor Gyokeres scored after Palmer fed him after McFadzean’s back ball was too short.

After 76 minutes, Palmer scored for Coventry with a free kick from right beyond the box to make the score 4-3.

Coventry didn’t relent in their pursuit of an equaliser, and Howard was able to deflect a shot from Gyokeres onto the woodwork.

But Wrexham persevered, moving on in the cup.

The Chairmen from Hollywood

After US TV coverage failed, Co-Club Chairman Rob McElhenney had to learn about his football team’s unexpected FA Cup triumph over Coventry City via social media.

The It’s Always Sunny In Philadelphia actor and creator had to rely on his Twitter followers to let him know the result of the game after he missed the thrilling conclusion when the ESPN+ feed went down. Then, ecstatic supporters informed him that Wrexham had defeated Coventry City 4-3, holding on although Coventry scored three goals and was getting close to scoring a fourth.

Ryan Reynolds, the team’s other co-owner, declared himself “totally speechless” following the 4-3 victory.

Wrexham’s next FA Cup game will be against another Championship team, Sheffield United.

The win, according to the team’s manager Phil Parkinson, was “up there with the greatest” since he started at Wrexham in July 2021.

“You have to savour these days. It was a great occasion from the moment the coach arrived at the ground and the players saw all those 4,500 fans,” he said.

“Honestly, everyone felt 10-feet tall when they walked into the dressing room. The adrenaline that was pumping through the players’ bodies was a by-product of that great support,” he said.

“The league is most important but we’ve got a great history in the FA Cup and we wanted to respect that.”