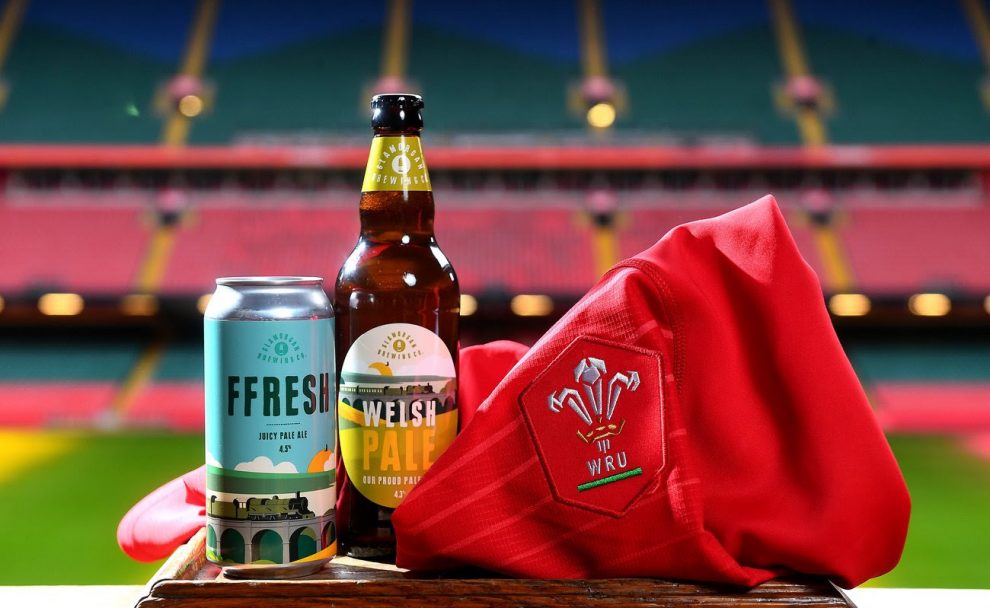 The deal with the Llantrisant based brewery which will run until Summer 2025, has been secured in time for the first home match of the Guinness Six Nations Championship against Ireland in Cardiff on 4th February, and will see a range of five beers and award-winning ales available at Principality Stadium.

Glamorgan Brewing has well established existing links with Welsh rugby, as a long-standing supplier to many grassroots rugby clubs across Wales from Lampeter to Llandaff, including Pontyclun rugby club which is local to their brewery site and Cardiff Rugby at Cardiff Arms Park – with a future ambition to supply all the local rugby clubs in Wales.

“We want our ales to be a part of the match day experience – whether at the stadium, in the pub or on the sofa – and we’ll be working hard to get great Welsh beer into the hands of supporters ahead of the upcoming Guinness Six Nations fixtures. Seeing fans enjoying our Welsh Smooth or Ffresh Juicy Pale Ale in the stadium for the first home game is going to be a real buzz, and we’re looking forward to getting to know supporters as the Official Ale Supplier of the Welsh Rugby Union for many years to come!”

Supporters can choose from a variety of ales from Welsh Smooth, a beer that offers a nostalgic twist on your local rugby club beers of yesteryear, and with an ABV of 3.7%, this will be the lowest alcohol content beer served at Principality Stadium, to Cwrw Gorslas, a traditional bitter and the award-winning Jemima’s Pitchfork, a refreshing ale, full of fruit flavours.

“We’re proud to announce our new, official partnership with Welsh company, Glamorgan Brewing.” said Rhodri Lewis, WRU commercial and Legal Director. “We strongly believe at Principality Stadium we deliver one of the best spectator experiences in the world, and to be in a position to showcase successful Welsh businesses to a global audience of thousands who visit us each year, not just for international rugby but the myriad of events we host, is fantastic.

“In today’s market, it’s important that we’re able to offer as much choice to supporters as possible, this is a vital part of spectator experience; so, we’re delighted that from the start of the Guinness Six Nations we will have an additional five ales to add to our existing menu of both alcoholic and non-alcoholic beverages. The Glamorgan Brewing Company is an avid supporter of the game in Wales and we admire their commitment to Welsh Rugby and other sports in Wales.”

“As a not-for-profit organisation, it’s important to emphasise that all of our proceeds go directly back into the game in Wales.

“As always we encourage supporters to enjoy our matches safely, responsibly and with the utmost respect for Stadium staff and those around them at all times.”